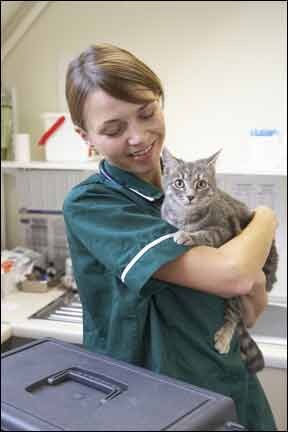 As cats reach the age of eight or nine (the rough equivalent of 40 or 50 in a human), they may begin to show signs of age-related physical disorders that may or may not increase in severity as the animals continue their transition into old age. Some feline geriatric

conditions, of course, may ultimately prove fatal. Others, however, may be amenable to medical therapy that can extend the life of an elderly cat for several years.

Hypertension (abnormally high blood pressure) is one of the latter disorders. If untreated, it can lead to blindness and possible damage to the heart, kidneys and brain. But given an accurate assessment of its cause and prompt initiation of appropriate veterinary treatment, the condition is most often manageable, says Richard Goldstein, DVM, an associate professor of small animal medicine at Cornell Universitys College of Veterinary Medicine who is board-certified by both the American and the European Colleges of Veterinary Internal Medicine. Feline hypertension, he notes, occurs “far more frequently than people think.”

Serious Implications. In itself, high blood pressure can have potentially dire consequences for a cat. The most common sign of uncontrolled hypertension, Dr. Goldstein points out, is retinal detachment, a blinding condition in which the retina – the light-sensitive membrane lining the inside of the eyeball – becomes separated from the other interior tissues of the eye.

Hypertension can also have neurologic implications, causing disorientation, seizures and even stroke. In addition, the condition may affect kidney function, the signs of which will include poor appetite, weight loss and increased water consumption and urination. And it can cause cardiovascular problems and resultant difficulty in breathing. “Its likely that hypertension also causes problems that we cant perceive in cats,” Dr. Goldstein adds, “such as headaches and dizziness.”

Root Causes. In some cases, a cats elevated blood pressure has no discernible cause. This is known as “primary” hypertension. Although primary hypertension is frequently diagnosed in humans, it is not known to be as common in cats.

On the other hand, veterinarians frequently diagnose “secondary” hypertension, which happens as a consequence or byproduct of another physical disorder. Occasionally, although very infrequently, the condition can stem from the presence of a heart disorder or a tumor that is producing excessive amounts of certain hormones, such as epinephrine, or corticosteroids. Its also possible that some medications may raise a cats blood pressure, but only temporarily. Fear, anxiety or sudden physical trauma may also cause a spike in an animals blood pressure, but random occurrences such as these have not been linked to chronic feline hypertension.

In the majority of cases, however, secondary feline hypertension is a consequence of either chronic kidney disease or hyperthyroidism, says Dr. Goldstein. And of those two conditions, kidney disease (renal failure) is seen more often by far.

Several complex factors can result in the development of kidney-related feline hypertension. For example, the kidneys are responsible for maintaining the proper amounts of fluid and salt in the body. They also produce hormones that help regulate blood pressure. But diseased kidneys often produce abnormal amounts of these hormones or they inappropriately retain salt and water. The resulting fluid retention leads to congestion in the circulatory system and, in turn, to a buildup of pressure in the arteries. This problem is especially prevalent in older cats.

In hyperthyroidism, there is an overproduction of thyroid hormones and a resulting elevation of an animals metabolic rate. Due to this acceleration, the heart beats faster and more forcefully. This overfunctioning results in increased pumping pressure, greater output of blood into the arteries, and sometimes a corresponding rise in blood pressure.

Risk Factors. Advanced age and the presence of either chronic kidney disease or an overactive thyroid gland are by far the greatest risk factors for the condition, says Dr. Goldstein. No specific risk factors for hypertension have as yet been determined regarding gender, breed, physical characteristics or environmental influence – whether, for example, a cat spends most of its time indoors or outside its home. Although obesity is known to be an important risk factor for the development of high blood pressure in humans, it would make sense that being overweight would increase the risk in cats as well, but this link has not been well established, he says.

The extent to which hypertension is age-related is also something of a mystery. Such precipitating conditions as renal disease and hyperthyroidism, are, for certain, more frequently seen in older cats. However, says Dr. Goldstein, “High blood pressure, in itself, may not be age-related.”

Clinical Signs. Cats with hypertension will exhibit problems associated with the systems that are typically affected by the condition – for example, sudden blindness if the ocular system is involved; loss of appetite, lethargy and excessive urination if the kidneys are at the source of the problem; disorientation and perhaps seizures if the nervous system is associated with the high blood pressure.

Except for the ocular and neurologic signs, however, indications that an animal is experiencing systemic hypertension are often vague and nonspecific. So its essential that blood pressure be measured routinely in order to determine whether a cats blood pressure is disturbingly elevated.

“For cats,” says Dr. Goldstein, “no precise numbers have been established, but a normal reading in the clinic would be considerably higher – somewhere around 160/80.” Although a cats blood pressure can spike considerably higher than that – especially if the animal is upset or anxious – a veterinarian will be concerned, says Dr. Goldstein, if the systolic pressure reaches 180 or 190.

Effective Treatment. Medical management of primary hypertension most commonly centers on two types of medications: calcium channel blockers and angiotensin-converting enzyme (ACE) inhibitors, both of which work by relaxing and dilating an animals blood vessels. “These are easy-to-use drugs,” Dr. Goldstein points out. “Theyre given once or twice a day, and theyre very effective.” He adds, however, that high blood pressure, once diagnosed, may have to be treated with these drugs permanently.

Regarding secondary hypertension, treatment will focus on the causal condition. Some cases of hypertension associated with hyperthyroidism can be reversed within a few weeks of treatment of the thyroid condition, but other cases will require lifelong medication. Since chronic kidney disease is not curable, antihypertensive therapy may be permanently required.

Dr. Goldstein strongly advises that owners have their cats blood pressure monitored regularly. “Young cats should have their blood pressure taken at least once a year,” he says, “and twice a year starting at age six or seven. You cant prevent hypertension, but diagnosing it early – before it causes severe damage – is certainly worthwhile.”