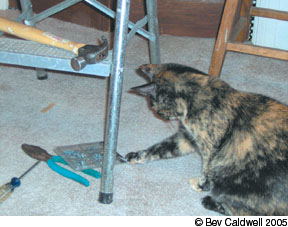 It has been said that building or remodeling a house is one of the greatest stresses a family can endure. According to the well-known Holmes Rahe Stress Test, remodeling a home ranks at number 20, right up there with starting a new diet or quitting smoking. The dust, noise and the overwhelming number of design decisions are enough to drive anyone bonkers.

If you think remodeling might be hard on you, think for a moment about how it would affect your cats. Cats, by their very nature, are creatures of habit. A construction project is sure to disrupt their routine and play havoc with their delicate dispositions. Nap in a sunny window? No way. Saunter into the kitchen for a mid-day snack? Dont think so. Its more likely that your cat will take up residence under the bed or in a dark closet until all the hoopla subsides.

Perhaps no one knows this better than Patricia Fry. On several occasions over the past decade, she has embarked on a series of home and garden projects at her Ojai, California residence. The home now looks magnificent; however, the constant pounding of hammers and the buzz of chain saws reduced her cats nerves to sawdust. During the indoor construction phase, Patricia managed to corral all her cats into one bedroom as far away from the activity as possible. Still, her two skittish cats, Katy and Dinah, were never able to relax. As for seven-year-old Max, he was so upset that he began to urinate throughout the house.

Beware of Hidden Dangers
As if the situation with Max werent enough, Patricia had to contend with the disappearance of Dinah one night. Unbeknownst to her, this four-legged Houdini managed to escape the house through a small opening in one of the walls.

Dinah had found a hole that was left for an electrical plug and helped herself outside, remembers Patricia. I was just glad the other cats didnt find it.

Patricia was lucky that day. She quickly found Dinah outside and took steps to ensure that all areas in the house were more secure from then on. Keep in mind that an inquisitive cat simply cant resist slipping through a gap in a wall or a door that has been left ajar and fleeing the premises. This can have disastrous results, especially for an indoor cat that is not accustomed to being outside. This scenario plays out all too frequently, according to Dr. Jane Brunt, a veterinarian at Cat Hospital at Towson (CHAT) in Baltimore, Maryland. Thats one reason why all cats should have permanent identification, such as a microchip, she emphasizes.

Boarding Your Cats: A Good Idea?
Many homeowners in the throes of a remodeling project have asked the question:  Should I keep my cats at home or board them during the craziness of construction? Well, that depends on the cat and the situation. If you cannot be home during the day to oversee the project, it may be preferable to board your cats or ask a friend, family member or neighbor to care for them.

Boarding your cat would definitely be the safer option, says Dr. Brunt, who has cared for many cats that have sustained injuries during a home renovation project. If there is going to be exposure to dangers like construction injuries or toxins (for example, are you refinishing a floor?), then you want to have them stay away from home.

Yes, remodeling is one of the biggest stressors we can face. But with a little planning, you can maintain equanimity, keep your cats safe and, in the end, be happily ensconced in a home that you all can enjoy for years to come.

Safety Tips to Remember
• Place your cats in a familiar room as far from the construction zone as possible. Be sure they have all the necessities, like food, water, litter boxes, bedding and toys.

Post a sign that states: CATS INSIDE – PLEASE DO NOT OPEN! to remind workers to avoid that room.

As a last resort, you can contain your cats in a large crate or cage for short periods of time.

Secure the area every day after workers leave – make sure there arent any escape routes.

Pick up small objects such as nails, tacks and staples, which can easily be stepped on or swallowed.

Be cognizant of any potentially poisonous materials a worker may leave around (for example, paint, paint thinner, brushes and rollers). Remember, cats are fastidious groomers and will try to remove a substance from their fur by licking it off.

Contact your veterinarian if your cats stop eating or drinking water or act sick in any other way.