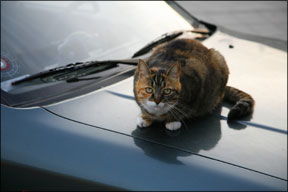 Your cats safety and good health should be a year-round priority. And unless you keep your cat indoors all of the time, the challenge is likely to be most demanding during the summer months, when temperatures soar, and cats are more likely to wander from the secure confines of their homes.

During extremely hot, humid weather, cats are increasingly vulnerable to heat exhaustion and dehydration. They are more prone to assault by fleas, ticks, and other parasites. They can be dangerously exposed to cancer-causing sun rays. And they are more likely to come in contact with such noxious substances as

Among the most severe of summertime risks facing the outdoor cat is the threat of being hit by a motor vehicle, says Christine Bellezza, DVM, a consultant at the Feline Health Center of Cornell Universitys College of Veterinary Medicine. “As the weather warms up,” she points out, “cats tend to be outside more often. So theyre more likely to roam around, cross streets, and wander into the path of a car.”

All things considered, advises Dr. Bellezza, youll be doing your cat a huge favor if you simply keep him or her indoors in a safe and secure environment. This is true the year round, she says, but especially during the summer months.

Dire Consequences. A major concern during extremely hot weather is, of course, heat exhaustion, a debilitating disorder that can easily progress to a potentially fatal attack of heatstroke – a traumatic event that could lead to multiple organ failure. The condition most frequently occurs in cats as the result of being confined within an airless and overheated area – a parked automobile, for example – especially if the animal does not have access to drinking water. The initial signs of feline heat exhaustion include rapid panting, muscle weakness, staggering, rapid heartbeat, fainting, tremors, and possibly vomiting.

Unless a cat that is experiencing heat exhaustion is cooled down immediately, heatstroke is likely to ensue. When that occurs, the animals panting will become increasingly labored and rapid, and as it pants, it will be pulling in air that is likely to be hotter than its normal body temperature (typically between 100.4o F and 102.5o F.). If the overheating (hyperthermia) is unrelieved and the cats body temperature reaches 105o F. or higher, cell damage will start to occur, which can result in kidney, liver, and gastrointestinal dysfunction, lowered levels of blood oxygen,

Obese cats and older cats with age-related conditions, such as advanced cardiovascular disease, are at greater risk for heatstroke than are young, healthy animals. Densely coated cats (Himalayans and Persians, for example), whose bodies are less able to dissipate heat are also at elevated risk, as are brachycephalic breeds, those with flat faces and short noses, who may lack sufficient nasal space to allow the cooling of inhaled air.

Dr. Bellezza also advises owners to minimize their cats exposure to bright sunlight, since the suns ultraviolet rays greatly increase the risk of squamous cell carcinoma, a type of skin cancer that, she points out, usually manifests itself on an animals nose or ear margins and can be locally destructive. Most susceptible are white or lightly pigmented cats. All cats, however, should be discouraged from basking for extended periods in harsh sunlight. Limit their time outdoors, she advises, and use ultraviolet blocking film on their favorite sunbathing windows.

Increased exposure to fleas, ticks and other parasites, which proliferate during warmer months. “Cats are also at risk for dangerous encounters with dogs, coyotes, and other animals in the outdoors during the summer,” she points out. And, she adds, they can get into violent and potentially lethal fights with cats that might be harboring the feline leukemia virus (FeLV), the feline immunodeficiency virus (FIV), or other contagious microorganisms.

Contact with environmental hazards, such as poisonous pesticides and lawn chemicals. Dr. Bellezza also warns that antifreeze, which commonly gurgles out of overheated automobiles during hot weather, is a sweet-smelling liquid that is very attractive to cats and is commonly found during the summer months puddled in parking lots or garage floors. The ingestion of ethylene glycol – the main ingredient in most automobile antifreeze products – can cause serious damage to a cats system and, if untreated, can lead to death from kidney failure within 24 hours.

Falling from high places, a phenomenon commonly referred to as the “high-rise syndrome.” A cat sustains serious injury by leaping or accidentally tumbling from an open window or balcony far above ground level. “In hot weather,” says Dr. Bellezza, “people start opening windows. If the windows dont have screens or if the screens they do have arent latched properly, a cat can easily fall out.”

Keeping Cool. Following are some tips on how to help your cat stay healthy and comfortable during the hot summer months:

Never leave your cat alone in a car or other confined and airless area on a hot, humid, sunny day.