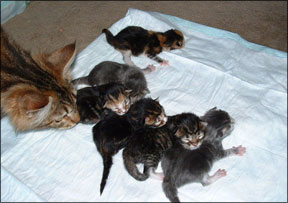 The ancient Egyptians revered her in the form of

Bastet, the feline goddess of fertility and protector of women and children. Other ancient peoples kept small statuettes of her with suckling kittens throughout their homes to bring good luck. Modern science has studied her, attempting to explain her ways. Who is she?

Shes the mother cat: skillful, attentive, greatly admired and occasionally criticized. But even though experts and human companions who have been fortunate enough to live with a mother cat know quite a bit through their observations, myths about her abound. Here are some of the fiction and facts about mother cats.

Many people believe that kittens that are taken from their mothers too early dont know how to mother their own kittens. “This is not true,” says Katherine A. Houpt, VMD, PhD, the James Law Professor of Animal Behavior at Cornell Universitys College of Veterinary Medicine. “Mothering in cats seems to be innate.” A new mother may occasionally seem to be overwhelmed with her first litter, but she still knows what shes doing.

Other common beliefs include: Mother cats will reject their kittens if something seems wrong with them. “It does happen,” says Dr. Houpt, “but its pretty rare. A cat may reject – sometimes kill – a kitten if its unresponsive.”

Touching newborn or very young kittens will cause the mother to reject them. “Not true,” says Dr. Houpt. “If the mother cat has been in the home with you and is used to you and your scent, she shouldnt mind you touching her kittens.”

Mothers grieve a long time if their kittens are taken from them. “Actually, they will hunt for the kittens for two or three days,” says Dr. Houpt, “and then resume normal behavior.”

Kittens on the Move

Its true that its common for a mother cat to move her kittens from their original birth location. You may pick out what you think is the perfect place in your house – soft, quiet and secluded – for your cat to give birth in. She may stay there that long, but the next thing you know shes taken the kittens away. For reasons known only to her, your cat believes your chosen place isnt safe for her newborns. “In the wild, cats move their kittens to avoid predators – and fleas,” says Dr. Houpt.

Many people believe that once a domestic cat moves her kittens away from the spot where she gave birth, you must leave them in the new spot. Not necessarily. “If you find the material on which the mother gave birth – with the scent of the amniotic sac – you can use it to try to lure the mother with her kittens back to a more preferable location,” says Dr. Houpt.

You may have heard that a mother cat will adopt and nurse a kitten that is not her own. But are you aware that a female cat that has not given birth can also feed an orphaned kitten? “There is a decline in hormones after a cat is spayed,” says Dr. Houpt, “just as there is after pregnancy. This then stimulates lactation if a kitten starts to suckle.” The cat probably wont produce enough milk to sustain the kitten, but the surrogate mother can be used to help if a kitten needs milk immediately.

Also intriguing is a situation in which a mother cat adopts another baby animal, such as a puppy or even a squirrel. Does she do this because she is grieving for one of her kittens? While thats possible, theres a more likely reason: “In the wild, two queens [mother cats] may nest together and protect and suckle each others litters while one queen hunts or moves the kittens.” So cats are used to “babysitting” other kittens and will often accept a baby of another species. Interestingly, there is a tendency for kittens raised with a baby squirrel to be less likely to view a squirrel as prey later on.

Father Cats and Other Strangers

Is it true that if a mother and her mate are raised together, the father will show paternal behavior toward his own kittens? “No,” says Dr. Houpt. “If free to roam, the males usually leave the mother and kittens. At best, he will ignore them. There have even been occasions when the father attacked the mother because she smelled so different after giving birth, says Dr. Houpt.

If a strange male cat comes upon a mother cat and her kittens, he will try to kill the kittens – just as lions will attempt to kill young cubs. The males do this because, if the kittens are gone and the mother is no longer nursing, she will more quickly go into heat again and be ready for mating.

A mother cat may keep a close bond with one or two of her adult kittens if they live in the same household. Occasionally, a mother cat with a new litter will allow her adult offspring to nurse from her. There have even been cases in which a female – pregnant with her own kittens – will nurse from her mother if she has another litter herself.

If living with a dog, the mother cat may be very aggressive and attack the dog if he comes near her kittens. When the kittens are gone, however, the cat is likely to resume a friendly relationship with the dog.

What about other female cats in the household? “Once in a while, another female will try to kill the kittens,” says Dr. Houpt. “Its not common, but its something to be aware of in a multicat household.”