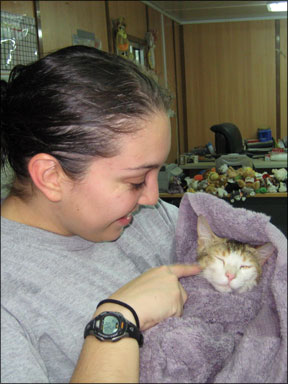 Operation Baghdad Pups, an SPCA International initiative, helps Americans serving in Iraq bring home the animals theyve befriended while on duty. Though at first glance, it might appear that Operation Baghdad Pups is limited to canines, roughly ten percent of the pets in the program are cats.

was a small, calico kitten that had been hiding in a trucks engine compartment. Bruce, an American contractor working in Northern Iraq, estimates the kitten was riding in the engine for more than 30 km before she jumped out from under the hood. Alarmed by the kittens serious injuries to one of her front legs, Bruce and a security medic liaison officer treated her “in the field.” When she didnt improve after a few days, Bruce took the kitten to the site emergency medical doctor, who gave her further medical treatment.

Bruce relates that in an environment in which he had little social contact and spent every waking hour installing “important basic infrastructure” to the local people in Northern Iraq, the little kitten “Hope” filled a void in his life. When the kitten was well enough to venture outside, she quickly befriended the rest of the camp and became a well-loved, affectionate mascot.

The day came, of course, when it was time for Bruce to head home; however, he couldnt bear the thought of leaving “Hope” behind. She lacked all survival skills of a feral cat, he explains, and with the emotional attachment he had made during the six months the two had been together, “It would be like me abandoning my own child.”

Through the Operation Baghdad Pups initiative, SPCA International in Washington, D.C. quickly set about making arrangements for Hopes travel to the United States. The process involved multiple and often frustrating steps, which included getting Hope vaccinated in a country with few veterinarians and virtually no access to vaccines; completing her travel paperwork with local authorities; and hiring a security company to help with the logistical nightmare of getting Hope from her remote location in Iraq to the Baghdad airport – all before Bruce left the country. Then there were the final flight arrangements. Hope would fly with an escort from SPCA International (to prevent her from being lost en route or bumped from a connecting flight and off-loaded at a foreign tarmac) from Iraq to Kuwait; Kuwait to Frankfurt, Germany; and finally from Frankfurt to Washington, D.C. – in all, a nearly 7,000 mile trip that would take more than 13 hours.

Since Hope arrived in Northern Virginia (April 2008), SPCA International has enabled eight cats (and nearly 70 dogs) to make the voyage to the states. Other fortunate cats have included, “Jasmine” and “Miki.” Jasmine was discovered by a unit of American soldiers after a fierce firefight. Without hesitation, the men scooped up the fragile, terrified kitten (whose mother and littermates had been killed in the battle) and carefully nursed her to health, providing food and drink from their own rations. Jasmine traveled with the unit for two years. When the units tour was finished, the men would not leave her behind; Operation Baghdad Pups assisted in making sure Jasmine came home safely.

Mikis introduction to soldiers wasnt quite as traumatic as Jasmines: Miki simply walked into the mailroom one day at a Forward Operating Base east of Baghdad … and walked out with the soldiers hearts. A pretty, playful orange and white tabby, Miki entertained the soldiers with her silly antics, helping them to forget – if even for a little while – that they were thousands of miles from their loved ones. She, too, was given passage home through the Operation Baghdad Pups program.

Keeping Up With Requests

Currently, Operation Baghdad Pups receives four to five requests a week from service members in Iraq requesting help in bringing back cats and dogs that theyve befriended. In the month of October 2008 alone, arrangements were coordinated for 25 dogs and cats to come “home” to the United States and another 30 are on the waiting list.

“When we started the program, we knew there was a need but we had no idea that the program would grow so large,” says Stephanie Scroggs, director of communications for SPCA International.

To handle the number of animals being transported out of Iraq through the program, an escort from SPCA International often will travel with four or five animals, and the organization will send two or three escorts into the Middle East at one time. Terri Crisp, program manager of Operation Baghdad Pups, has made 15 trips to Baghdad in a period of four months and has several more trips planned before the year is over. She has logged more than 196,500 air miles but insists she would board a plane tomorrow if it meant reuniting another service member with his or her cat. “Its amazing. Its all worth it,” says Crisp. “It doesnt matter how long the flight was or how many days it took, I would do it all again in an instant just to have that pet be with its soldier and become a part of that soldiers family.”

The value that is placed on these animals by both the soldier and his or her family is beyond description, Crisp relates. Family members are asked to meet the arriving pet at the airport, as the animal is sent to the states prior to the service members departure. “When the family member sees their loved ones pet for the first time… when they see the dog or cat that has meant so much to their husband, wife, son or daughter… its a very emotional time,” explains Crisp. “They say its as though they feel a piece of the soldier has come home with the dog or cat; that in some way, he or she is there with the family at that moment.” Coupled with the knowledge that the pets loved one will be arriving safely on American soil soon, its a very good feeling all around.