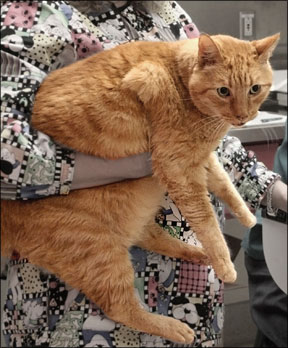 Feline obesity is a problem among housecats. “As many as 30 to 40 percent of cats are overweight, with 15 to 20 percent falling in the obese range,” says Joseph Wakshlag, DVM, PhD, DACVN, assistant professor of clinical nutrition at Cornell Universitys College of Veterinary Medicine. Despite public education efforts by the veterinary community, the numbers have not improved over the

past decade, which is especially troubling because added weight can have serious health repercussions for cats.

An overweight cat is at risk for several diseases, relates Dr. Wakshlag. “Obesity is one of the biggest factors for feline diabetes II,” he says, adding that the extra weight carried by heavy cats causes stress on the felines joints, which can cause early onset of arthritis. Obese cats are also at heightened risk for feline hepatic lipidosis (FHL), or feline fatty liver syndrome, a liver disease that occurs when fat cells build up in the liver and prevent it from functioning normally. Heavy cats also may have more difficulties grooming themselves, which could cause hygiene and skin issues. Overweight cats may also be at increased risks in surgery.

Some breeds may be more likely to be slender, such as the Burmese or Siamese cat, and short-faced breeds may be more prone to be heavy; however, for most cats the most common causes of obesity are inactivity and overeating, says Dr. Wakshlag.

“Cats are now indoors and no longer expending the energy they would if they were outdoors,” says Dr. Wakshlag. Being an indoor kitty greatly extends a cats life; however, it drastically reduces the cats regular activity.

Added to a much more sedentary lifestyle, some cats are more prone to overeat. There are cats that are members of the “clean plate club” – cats that will eat large portions of food and beg for more. For other cats, troubles arise when owners allow them to “free” feed, or eat as much as they want from a practically bottomless bowl. In either case, the cat is in the habit of eating far more calories than it is burning on a daily basis.

When energy “in” is greater than energy “out,” the results are usually the same: weight gain. And, a continual and gradual weight gain will eventually produce an overweight cat.

Getting Back in Shape

Some experts recommend that cat owners try to get their cats to exercise through toys, games and hunting for bits of food around the house. Though these activities are certainly stimulating for the cat and are excellent bonding exercises, it is doubtful that they will produce the amount of exercise necessary to impact the cats weight loss. Dr. Wakshlag points out that a recent study found that a dog would need to be walked or run a minimum of two miles a day to impact the dogs weight loss. A similar daily regime would difficult, if not impossible, to structure for an indoor cat, using toys, play games and food searches.

A better approach is to control the cats portions. Dr. Wakshlag recommends feeding your cat twice a day and accurately measuring the cats servings. Pet owners are often surprised that what they thought was one-third a cup of dry food was actually nearly double that amount. A good starting point for determining how much to feed your overweight cat is to calculate how much the cat is currently eating and cut back approximately 25 percent.

If you find that you are feeding your cat below the low range of a foods feeding recommendations (found on the product packaging), Dr. Wakshlag recommends considering a therapeutic food that is specially-formulated for weight control. “The cat can consume more food and will be receiving the nutrition it needs,” he explains. Whenever making a diet change for your cat, however, you should introduce the new food into the current food over a period of several days.

And remember, helping an overweight cat to lose weight is a slow process that takes patience and consistency from the owner. A cat that is successfully losing weight will be losing in ounces (not pounds, as in humans). A safe guideline is no more than a one to two percent loss of the cats initial weight per week.

When a cats intake has been reduced, its very common for the cat to let you know that it feels hungry and to pester you until you break down and feed him more. To prevent a demanding cat from “dancing on your head in the middle of the night because hes hungry,” Dr. Wakshlag recommends making the bigger portion of your cats two meals before you go to sleep each night. In this way, you will be able to (hopefully) sleep uninterrupted.