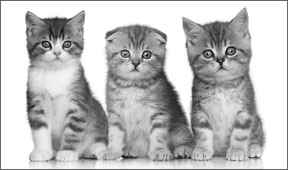 Eighty to 90 percent of mammary tumors in cats are cancerous and can spread as rapidly as aggressive breast cancer does in humans. Researchers at the Cornell University College of Veterinary Medicine are hoping to improve treatment of mammary adenocarcinomas, with the long-term goal of a cure. Their pioneering focus: the role of stem cells in the disease.

Gerlinde Van de Walle, DVM, Ph.D., Assistant Professor of viral pathogenesis and stem cell biology at Cornell’s Baker Institute for Animal Health, is working to identify adult mammary stem cells (MaSC) in both healthy and malignant feline and canine mammary gland tissues. “Mammary stem cells have been identified in humans, mice and horses, but not much is known about MaSC in dogs and cats,” she says.

Her theory is that mammary cancer is an adult stem cell disease and that MaSCs are particularly susceptible because they survive longer and go through more changes than most differentiated, or specialized, mammary gland cells do.

Adult stem cells are unique, self-replicating cells that also can develop into specialized cells to form different tissues, and as such, adult stem cells are responsible for regenerating and healing tissue throughout an animal’s life. They have been identified in many species’ mammary glands, bone marrow, muscle, fat and organs — in fact, in practically every adult organ, Dr. Van de Walle says. “Normal adult cells die off and are replaced by new cells, but stem cells are present for a very long time in an organ, so the chances that something goes wrong with these cells are much higher.”

The incidence of mammary cancer varies greatly. It’s widespread in humans, cats and dogs and uncommon in cows and horses. But cats are rarely studied, compared to research in humans and mice, Dr. Van de Walle says. However, because cats develop deadly mammary tumors that are very similar to what is seen in humans, both species could benefit from her research.

Dr. Van de Walle’s ultimate goal is to determine how stem cells develop into cancerous tumors and to try to eliminate them so they can’t return. “Mammary gland tumors are a huge problem in companion animals, especially for cats,” she says. “Most are removed surgically, but after a couple of years there is a high recurrence of these tumors.”

Facing a Challenge. Her first step will be to isolate MaSCs by identifying surface markers — recognizable proteins attached to each cell’s surface — with the use of flow cytometry. This frequently used technique examines the expression patterns on specific cells, including MaSC. A special challenge she faces is that some markers are commonly found on many cells besides stem cells, making MaSCs hard to identify.

In addition, it’s sometimes difficult to find markers that work for feline cells because their proteins are not always identical to those of humans, Dr. Van de Walle says. “Because dogs have been considered good animal models for human diseases, more dog-specific research tools are available, making it easier to work on dogs than on cats. We can use commercially available antibodies for the canine MaSCs, but we need to create our own feline tools if we want to characterize feline MaSCs.”

Dr. Van de Walle’s previous research has paved the way for her current study, which is funded by the Morris Animal Foundation and Ghent University in Belgium. The mammary gland differentiates mammals from all other animals, she writes in “Mammary Stem Cell Research in Veterinary Science: An Update,” published in January in the journal Stem Cells and Development.

Unchanged DNA. “In a mammal’s lifetime, the mammary gland probably undergoes more and greater changes in size, structure, composition and activity than any other tissue or organ. These repeated changes make breast tissue vulnerable to gene mutations and epigenetic alterations in gene expression,” Dr. Van de Walle says. Epigenetics are a regulating mechanism of genes. They change the expression of the gene over time without changing the DNA code. The result: Both genetic and epigenetic modifications are key contributors to cancer’s development, she says.

One gene is of particular significance in her research, though its role in feline and canine mammary cancer is unknown at this point: the spleen tyrosine kinase (SYK) gene. It’s been shown in human breast cancer that it can function as a tumor suppressor gene. SYK is an enzyme that acts as an off-on switch in many cellular functions and its expression is suppressed in human breast cancer. As a researcher at Ghent University, Dr. Van de Walle and her team discovered that the SYK gene is also expressed in the mammary gland tissue of dogs and cats.

“Once we isolate and characterize the MaSC from healthy mammary gland tissue and breast tumor tissue in dogs and cats,” she says, “we can compare the SYK gene expression in healthy and tumor stem cells to see if there’s a difference, as has been described in human research.”

If SYK expression is turned off in mammary tumors, finding the responsible mechanism could assist in turning the gene back on and slowing tumor formation, Dr. Van de Walle says. The approach could lead to development of novel anti-cancer drugs, but it will be many years before stem cell therapy or these novel anti-cancer drugs may be used to treat mammary cancer in pets, she says. “Maybe in five to 10 years we’ll be testing some of these theories if research goes smoothly.”