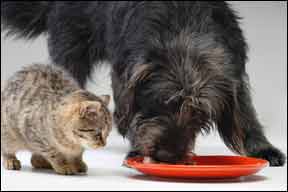 According to a recent Ohio State University, our pets can get sick from stress – just like us. The study found that otherwise healthy cats show signs of illness when stressed. And cats diagnosed with feline interstitial cystitis (FIC) became healthier when stress levels

were reduced, the study showed.

Twelve of the 32 cats in the three-year study were healthy, while 20 had FIC, a chronic pain syndrome that affects the cats bladder.

According to researchers, lower urinary tract diseases occur in about 1.5 percent of house cats, and many pet owners cant tolerate the mess that accompanies it. As a result, millions of sick cats are put down or relinquished to shelters every year.

The owners of the sick cats at the university had all chosen to have their pets euthanized, but agreed to let them take part in the study first.

During the first part of the study, Stella tried to make every aspect of each cats life the same: their cages, litter boxes, food, music, toys, time spent with the other cats and time spent with her and a caretaker. “I had to be careful if I was having a bad day, so it didnt rub off on the cats,” she explained.

According to feline expert Jane Brunt, “This study shows that an enriched environment – one that includes hiding areas, toys, bedding and other physical features, plus an everyday routine including a consistent caregiver, feeding and play times – reduces or altogether prevents some common signs of feline sickness such as decreased appetite, vomiting or eliminating outside their litter boxes. The significance is that minimising stress can decrease illness.”

The study was funded by the National Institutes of Health, and was published in the Journal of the American Veterinary Medical Association (January, 2011).

Human diseases that are similar to interstitial cystitis include irritable bowel syndrome and fibromyalgia, explained Buffington, who also works with stress researchers at the University of California at Los Angeles Centre for Neurobiology of Stress.

Believe it or not, stress to a cat may be nothing more than unwanted attention, a dirty litter box or a strange noise, Stella said. During stress-free times, healthy and affected cats got sick less than once a week.

During weeks when routines were changed – and therefore causing stress – the healthy cats got sick about 1.9 times a week and the others twice a week. This nearly tripled the risk for illness in all the cats.

Levels returned to normal when the stress passed. “Cats are not a pack species. They are not used to living in large groups. Their two primary predators are larger carnivores and primates and so who do they live with? Dogs and people. It can be tough being a cat,” Buffington explained. Research by Buffington in 2006 found similar health benefits when cat owners enriched home environments.

For now, the researchers hope cat owners and vets will analyze a sick cats environment – and make changes – before opting for euthanasia.