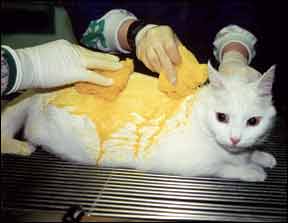 Feline dermatophytosis, commonly referred to as ringworm, is a fungal infection that is frequently observed in cats. The condition occurs worldwide, most commonly in warm, humid climates that are hospitable to the peculiar type of fungus that causes it. In the U.S., the disorder is especially problematic year-round in the deep South, says William Miller, VMD, a professor of dermatology at Cornell University’s College of Veterinary Medicine, and its prevalence can rise markedly in cooler areas of the nation with the arrival of hot and muggy summer weather.

The clinical signs of ringworm include areas of hair loss, broken and stubbly hair, patches of scaling, crusty or inflamed skin and alterations in hair color. Some affected cats may groom themselves excessively and scratch at their skin lesions, although Dr. Miller notes that ringworm is not typically an “itchy” condition.

If untreated, says Dr. Miller, ringworm — at least in a normal, healthy cat that is free of systemic disease — will probably resolve over time. Nevertheless, he points out, “Feline ringworm is not something that you want to take lightly. If it does go away without treatment, the process will typically take anywhere from nine months to a year, during which time the animal’s hair will keep falling out and its bare skin will be exposed. This can increase the animal’s risk of skin wounds and subsequent infection, not to mention that, in the winter months, a cat without fur will be cold and can experience frostbite.”

Another important reason for owners to seek prompt veterinary treatment for ringworm in their cats is that the disease has a high zoonotic potential — it can be passed to humans who come in direct physical contact with an affected cat. “So it really needs to be treated,” says Dr. Miller.

A Hungry Fungus. The name of this dermatologic affliction can be misleading. Although the lesions are, indeed, generally or ring-shaped, the condition has nothing whatsoever to do with worms. Rather, the cause of this disorder is a dermatophyte, a microscopically tiny fungal organism that originates in soil but can flourish as a parasite beyond its home environment.

The vast majority of ringworm infections are caused by a dermatophyte called Microsporum canis. Once entrenched in a cat’s skin, this fungus thrives by digesting keratin, a protein substance that is the main structural component of hair and nails. As this fungus consumes the keratin, it reproduces with awesome speed, creating millions of single-celled reproductive bodies (spores) that are capable of developing into new microorganisms.

When the dermatophytes come into contact with healthy feline tissue, several different outcomes may occur. They may be noticed and brushed off by a meticulously self-grooming cat; they may lose out in competition with more robust microorganisms and eventually disappear; they may establish residence on the skin without causing any adverse reactions; or, as a worst case, they may settle in droves on the animal’s skin and cause the hair loss and bald patches associated with the disorder.

A Social Disease. “Ringworm is the bane of animal shelters and catteries,” says Dr. Miller. “Once the organism gets into places like that, it’s extraordinarily difficult, if not impossible, to get rid of it.”

In general, cats that are exposed to M. canis and that are, for one reason or another, unsuccessful self-groomers are far more likely than other felines to contract ringworm. Also, says Dr. Miller, “kittens are, as a rule, socially gregarious — they like to play with one another and come into close physical contact.” And longhaired cats, such as Persians, may be at elevated risk due to the challenge of grooming their dense coats thoroughly.

“A ringworm infection usually manifests itself initially on a cat’s face,” says Dr. Miller, “because that’s where cats most commonly come in contact with each other while playing or socializing. Then, as the cat uses its paws to clean itself, it will spread the fungus all over its body. The severity of the infection depends a lot on the general health of the animal. If it has a systemic disease, such as hyperthyroidism, Cushing’s disease or a nutritional deficiency, the ringworm will spread much more quickly than it will in a healthy animal with a strong immune-system response.”

Spotting the Villian. If ringworm is suspected, a veterinarian will first attempt to exclude the presence of other dermatologic conditions, such as flea allergy, that M. canis infection may resemble. Toward this goal, says Dr. Miller, the veterinarian may examine the cat’s coat with a Wood’s lamp — an ultraviolet light under which a fungus-coated hair will glow with a yellowish-green color. The hairs that fluoresce in this manner are then examined microscopically for specific spores and other fungal characteristics. This procedure, however, may yield ambiguous results, since other infectious organisms may also glow under the light of a Wood’s lamp and some strains of M. canis don’t fluoresce.  Fungal culture is the most reliable diagnostic tool.

For any cat that presents with bald spots, he says, “the first and foremost thing you think of is ringworm,” and testing must be done to show whether the cat does indeed have ringworm. If it does, treatment for the condition will proceed accordingly. This typically involves treating each infected area with a topical antifungal medication and, in most cases, a systemic medication as well. If the lesions are present in many areas of a cat’s skin, a full-body rinse or dip may be used. “You want to attack this infection on both the inside and outside in order to cure it as quickly as possible,” Dr. Miller points out.

It will take at least six weeks or so of repeated treatments to completely cure a feline ringworm infection, he notes, “and a whole lot longer in some cases.”