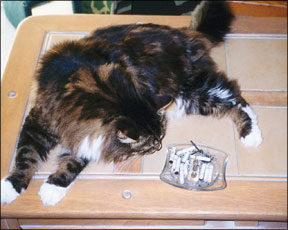 The American Lung Association defines secondhand smoke, also known as environmental tobacco smoke, as a mixture of the smoke exhaled from the lungs of smokers and the smoke that is given off by the burning end of a cigarette, pipe or cigar. These ambient fumes, which can linger in the air for hours after the source has been extinguished, will then be involuntarily inhaled by nonsmokers – with potentially deadly consequences.

Although secondhand smoke, which contains dozens of disease-causing chemicals (carcinogens) such as formaldehyde and benzene, is said to be responsible for at least 50,000 deaths in the U.S. each year from cancer and heart disease, it does

not only jeopardize the health of humans. Recent studies have shown that the physical well-being of companion animals is also threatened by inhaling air that is polluted by tobacco smoke. So if youre a cigarette addict, youll be doing yourself and every other creature living under your roof – including your cat – a huge favor by kicking the habit.

Studies have shown that cats who are persistently exposed to secondhand smoke are at increased risk for a variety of respiratory problems, lung inflammation, asthma and eye irritations. Even more alarming, perhaps, is research that reveals a dramatically elevated risk among these animals for developing two life-threatening cancers: feline lymphoma and oral squamous cell carcinoma.

Lymphoma, explains Margaret McEntee, DVM, an associate professor of oncology at Cornell Universitys College of Veterinary Medicine, is a malignant cancer that can affect the entire lymphatic system, involving the lymph nodes as well as the lymphoid cells that are distributed throughout the body – in the chest cavity, kidneys, liver, stomach, intestines, spinal cord and, most frequently, the gastrointestinal tract.

Squamous cell carcinoma, on the other hand, is a cancer affecting the flat, scale-like cells that constitute the outer layer of the epithelium, the tissue that lines the external and internal surfaces of tissues throughout a cats body. Most often observed as lesions on a cats skin, squamous cell carcinoma also occurs with considerable frequency in the feline oral cavity – the interior of the mouth.

“While we dont completely understand the process,” says Dr. McEntee, “it is clear that the carcinogens in secondhand smoke can cause mutations in the squamous cells and in the lymphocytes – the cells that constitute the lymphatic tissues.”

Alarmingly convincing evidence of a link between secondhand smoke and these two types of lethal feline cancer was provided several years ago by scientists at the Tufts University School of Veterinary Medicine and the University of Massachusetts. In a study involving 180 cats, the researchers found: (1) that the risk of lymphoma in cats exposed to household smoke was more than double that of cats that were not exposed to it; (2) that cats exposed for five or more years were three times more likely to acquire the disease; and (3) that the risk increased in direct proportion to the number of smokers in a household and the number of cigarettes that their owners smoked.

The researchers also found that cats living with smokers had a higher incidence of oral squamous cell carcinoma – and that the risk also increased in direct proportion to the number of smokers in their households and the number of years that the animals were exposed to secondhand smoke.

Other studies have shown that cats routinely exposed to tobacco smoke are at especially high risk for gastrointestinal lymphoma. “This is thought to be associated with their grooming,” Dr. McEntee says. “The carcinogens in the airborne smoke are deposited on their skin, and they swallow them into their GI systems when they groom themselves.”

Similarly, she says, the incidence of squamous cell-related oral cancer in cats may be attributed at least partially to their habit of ingesting the carcinogens while grooming as well as to inhaling them from the smoke-filled air of their environment. In addition, says Dr. McEntee, secondhand smoke may put cats at elevated risk for nasal cancer, because they typically breathe through their noses. “Dogs,” she notes, “are open-mouthed breathers by nature. But cats primarily breathe through the nose, so if theres smoke in the environment, it can potentially affect their nasal passages.”

Many mysteries remain concerning the link between secondhand smoke and feline cancer, Dr. McEntee points out. Indeed, she ways, “Not smoking does not mean that your cat is not going to get lymphoma or squamous cell carcinoma. Certainly, there will be cats that get cancer that live in households where no one smokes. There may be other predisposing factors – perhaps something dietary. But for now, there is very sound evidence of a link between secondhand smoke and these cancers.”

With that in mind, she agrees with her veterinary colleagues who urge cat owners not to smoke in their homes. They should either do their smoking outdoors, she advises, or at least smoke only in a separate room to which their cats never have access.