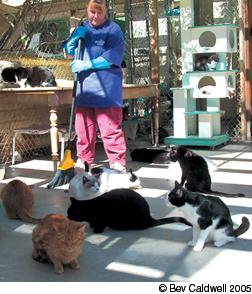 Animal shelters are the last place some people look when they want to adopt a pet. Visions of cats cowering at the back of their cages, doleful eyes peering between the bars, cats sleeping in their litter boxes, the smell of animal wastes, barking dogs, euthanasia and a stressed staff make some go elsewhere.

In prior years, shelters or pounds were perceived to be sad places, says Janet Scarlett, DVM, MPH, PhD, associate professor of epidemiology at Cornell Universitys College of Veterinary Medicine. The facilities themselves were not very inviting, and the animals were displayed in unattractive ways.

Luckily, many shelters have changed. Euthanasia rates are declining, thanks to spay/neuter programs and increased public awareness, according to the July 2003 issue of DVM: The Magazine of Veterinary Medicine.

Types of Shelters
Some animal shelters play an important role in the community. Receiving public funding, they perform animal control functions such as rescuing trapped animals, investigating animal abuse and collecting animals (primarily dogs) that are at large. Other shelters are private, non-profit organizations that rely on funding from donations and fund raising.

Shelters that do not euthanize animals are called no-kill, but even they sometimes need to euthanize animals too sick or injured to treat. Animal organizations such as the California-based Maddies Fund are seeking to establish a no-kill nation where all healthy, treatable shelter animals find adoptive homes.

When shopping for a shelter from which to adopt a cat, check out as many different types as you can. I strongly believe that people shopping for pets should look at both types, says Dr. Scarlett. There arent enough shelters to handle all of the homeless animals, and some by default have to euthanize.

What to Look For
When selecting a shelter, begin your evaluation the instant you walk through the door. The first thing to notice is odor, says Dr. Scarlett. If the shelter is not doing a good job of cleaning, I am concerned about how well they are able to take care of the animals.

Look at the way the animals are housed. Is food and water available in each cage? Is sufficient space allocated for each cat? Cats should have an interesting environment, with toys and shelving for vertical space so the cat is getting stimulation, says Dr. Scarlett.

The most important thing to look for is the condition of the animals. The animals should look healthy, with no coughing or runny eyes, and no evidence of diarrhea, says Dr. Scarlett.

Animals kept in communal areas should not be overcrowded, and they should have space or climbing trees where they can be alone. Sick animals should be separate from healthy ones. Sneezing and coughing cats should be in an isolation ward, says Dr. Scarlett.

Not all shelters have on-site veterinarians, but there needs to be veterinary medical assistance either through contract or volunteer veterinarians. Ideally, shelters should test cats for feline leukemia virus (FeLV). Some test for feline immunodeficiency virus (FIV), says Dr. Scarlett. A responsible shelter should neuter cats prior to adoption or offer a voucher for low-cost neutering with a local veterinarian. Then the shelter doesnt have to worry about progeny coming back a year later, says Dr. Scarlett.

Staff is Important
Does the shelter have an adoption counselor so you can obtain good information about an animal prior to adopting? Shelter staff often have some sense of the personalities of animals in their care, says Dr. Scarlett. Too often, people make decisions based on the cats color or appearance.

Staff should treat you with courtesy and respect. Even though a shelter is an animal service industry, its also a people business, says Michael Reed, director of the Peace Plantation, a lifetime-care facility housing over 300 cats and assorted other animals in Walton, New York. A successful shelter has to have a people person up front to try to make the public happy and to treat people nicely.

After seeing so many animals relinquished, it can be difficult for staff to remain cheerful.

Id like to see a separate place for adoptions versus intake, but in small shelters, that isnt possible, says Dr. Scarlett. When you accept relinquished or abandoned animals, its often hard to keep smiling.

When selecting a shelter, find out beforehand what the adoption policies are. Adoption fees vary and cover a variety of things such as vaccinations, spaying or neutering, testing for infections, etc. Some shelters have waiting periods during which they do background checks. Regardless of the type of shelter you select, choose one that seems to manage the animals best, advises Dr. Scarlett.

Once you find a shelter you like, you should also consider becoming a volunteer. I recommend getting involved with your local shelter, says Reed. Its an important way to be a part of the community.