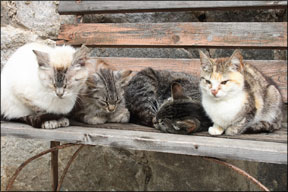 Anyone who rescues strays knows there is no shortage of cats. Wanting to provide a home can become a natural outgrowth of feeding them, and most people who adopt them have the best intentions. “They are caring, compassionate people who want to help them,” says Pamela Perry, DVM, a lecturer in farm animal behavior at Cornell Universitys College of Veterinary Medicine. But there is a fine line between adequately caring for multiple cats and obsessively accumulating them. Before deciding to bring in just one more, some important factors need to be considered.

Health Status. Free-roaming cats are subject to parasites and transmissible diseases with which an indoor-only cat might never come in contact. “When you take in an animal that you dont know, you usually know little about its background, including any diseases it may be carrying,” says Dr. Perry.

Before integrating the new cat into the household, the newcomer needs to have a thorough veterinary examination, including testing for infection with feline leukemia virus or feline immunodeficiency virus. “If you already have a cat, you dont want to bring another one into the house until it has tested negative for certain diseases,” says Dr. Perry. The newcomer also needs to be vaccinated, given flea treatments if necessary and checked for intestinal parasites and ear mites.

Work schedules and family activities may be deciding factors in whether or not to take in another cat. Some cats are more independent than others, but a stray cat may require a lot more care than you anticipated. Although most cats are crepuscular (active at dawn and dusk), a newcomer may demand attention when youre trying to get much-needed sleep. “Cats may sleep most of the day, but its still important to interact with them,” says Dr. Perry.

Adding another cat may require an additional litter box or two. Your resident cats may be litter-trained, but the stray may need instruction and may create messes in the litter box that were not a problem previously. Some costs such as litter and cat food may not go up much if another cat is added, but other costs may increase more significantly, especially if the newcomer has health issues. “People dont always realize how much money they might have to spend on pets,” says Dr. Perry.

Space Constraints. How much space each cat needs may depend on how well they get along. “A big consideration is: Will the other cats accept a new one?” says Fetterolf. A stray may seem fine with the person feeding him, but he may show other personality traits when confined to an enclosed space – like your home – where there are other cats. Too many cats that have issues with one another can create all sorts of behavior problems, like spraying, aggression, hiding, not eating, timidity and lethargy. The added stress of overcrowding may result in illnesses or injuries.