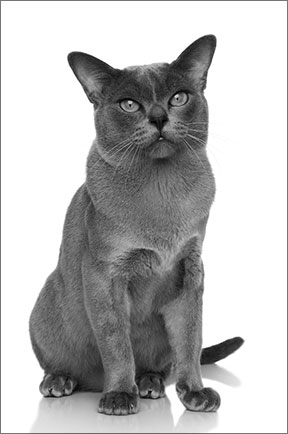 Living with a diabetic cat isn’t as difficult as owners initially expect, thanks to some pleasant surprises like this: About a third of cats will come to a point where they won’t need insulin any longer. They’re transient diabetics, says Megan Morgan, VMD, a specialist in internal medicine at Cornell University Veterinary Specialists in Stamford, Conn.

What’s more, advances in diet in recent years have made it possible for some otherwise-healthy cats to eventually become non-diabetic and stop requiring insulin injections when they switch to a high-protein diet. “That, to me, is really exciting,” Dr. Morgan says. “I can tell people: ‘There’s a chance that we can see improvement in your cat.’”

Cats who do remain diabetic can enjoy a fine quality of life. Here’s what you need to know to help make that happen.

Most Vulnerable. Diabetes commonly strikes older, obese cats, with males affected more often. It develops when the body doesn’t produce any or enough insulin, a hormone needed to break down and store energy from foods. As a result, the patient lacks nourishment, and the excess glucose remains in the bloodstream, potentially damaging organs and blood vessels.

The treatment of choice is exactly what Dr. Morgan’s 14-year-old domestic shorthair cat Frodo receives: insulin injected under the skin twice a day, every day, 12 hours apart, after meals to avoid complications. Frodo gets his injections at breakfast and dinner time.

“He doesn’t even notice when I give the injection,” says Dr. Morgan, crediting the tiny needle (much smaller than those used to draw blood at veterinary hospitals) and her recommended technique: She administers the shot in the scruff of Frodo’s neck as he eats. She varies the spot each time, viewing the loose skin as a clock. She aims for different “hours” on the clock to avoid irritating the skin.

“Owners are often pleasantly surprised at how easy it is to administer these injections,” Dr. Morgan says. “There are very few cats out there who really can’t handle getting an insulin injection. It’s not painful. And once they get used to it, they don’t even notice it.”

Glucose Plummets. Dr. Morgan is careful to give Frodo his insulin when he’s eating — not on an empty stomach. The reason: If a diabetic pet doesn’t eat but receives a shot of insulin, his blood glucose level plummets. “Then the brain cannot function normally,” Dr. Morgan says, “and we have seizures and neurological complications. We can see cats suddenly become weak and lethargic. Some of them can act as if they don’t know where they are and become very disoriented.” Worst-case scenario, if the cat’s glucose levels have been low for some time, he can become comatose.

Monitoring a cat’s food intake is critical. Dr. Morgan typically tells clients that, if a pet misses one meal, give him half his usual insulin dosage. If he misses more than one meal in a row, take him to the veterinary clinic to have his glucose level checked and try to determine why he isn’t eating. “If cats are diabetic, they should have an excellent appetite,” she says. “We need to get on top of that  and start getting that problem treated so we can safely treat their diabetes again.”

Trickier Cases. Diabetes isn’t difficult to treat — as long as cats don’t also have other serious health problems that cause them to lose their appetite or make their body more resistant to insulin. That makes regulating diabetes a challenge. Frodo is a transient diabetic, so flare-ups of his pancreatitis worsen his diabetes. When the pancreatitis improves, his diabetes improves. Some cats acquire diabetes because of conditions such as pancreatitis. “He’s actually doing well,” Dr. Morgan says of Frodo, who was diagnosed with diabetes in 2009 and also has chronic kidney disease.

Dr. Morgan tells clients that the maximum interval between veterinary visits for a diabetic cat should be three months. That way, the veterinarian can assess problems that may otherwise go unnoticed because cats skillfully hide illness. “They can really fool you sometimes,” she says.

Because hyperthyroidism, cancer, infection, inflammatory bowel disease and the liver condition called hepatic lipidosis (known commonly as fatty liver) are among other conditions that can complicate treating diabetes,
Dr. Morgan recommends that newly diagnosed diabetics be checked for other diseases.

No Home Testing. While some veterinarians recommend home testing of urine and/or blood, Dr. Morgan doesn’t. Instead, she advises owners to watch for signs that the diabetes is worsening: weight loss, increased thirst and appetite. Alert your veterinarian if you see changes.

Using urine test strips
at home means using non-absorbable litter in litter boxes, but some cats detest its rough texture. Worse, urine test strips always commonly reveal glucose in urine even in cats with ideally managed diabetes, leading owners to panic, Dr. Morgan says. Owners put a lot of emphasis on the amount of glucose in the urine. “That is just really not correlated necessarily with how well the blood glucose is regulated.”

At-home blood tests are like those used by human diabetics — you periodically get a drop of blood (by pricking the cat’s ear in this case) and put it on a glucose meter to check the glucose level. Dr. Morgan doesn’t recommend it because owners tend to misunderstand and become unduly alarmed when levels read, say, 400, when they really should be concerned at a low reading of 60.

“It can really affect quality of a pet’s life to constantly be pricked. We don’t want diabetic patients to be stressed all the time. Stress is going to make their diabetes a lot more difficult to regulate over the long term. And if they spend their lives hiding underneath the bed because they don’t want to be pricked in the ear, that’s not a quality of life for that patient.”

In the end, while caring for a cat with diabetes requires commitment, Dr. Morgan has found it’s also likely easier than you think. “People will tend to be very frightened when they initially hear that their pet is diabetic, and they will be afraid of treating them. I recommend trying because cats can have a really great quality of life despite being diabetic if they can have good care. It’s well worth trying to treat these guys for sure.” ❖