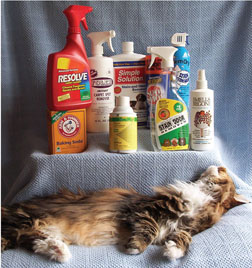 Youve asked a new friend to come over for coffee, and she accepts the invitation. Youve tidied up the place, and you have to admit that it looks good. So after work, you both walk in the front door of your apartment – and it hits you: the telltale odor that your cat has recently visited the litter box.

We love our cats, but we could do very well without the offensive smells and stains they often leave behind. Some odors, like that of urine, can seemingly last forever in a spot if you dont take care of it right away. Here, then, are some tips on getting rid of the not-so-adorable aspects of kitty companionship.

The two worst offenders that human companions encounter from their cats is the smell of feces and urine. This is often true even when the litter box is kept scrupulously clean. Some cats just produce very pungent waste. Even one time of your cat using the litter box can be enough to knock you over.

The first thing to do, of course, is scoop up the mess as soon as your cat finishes scratching in the litter box. But sometimes youll find that the odor lasts even after the offending waste is deposited. One of the easiest things to do is burn some incense. It only takes a few minutes for the incense to eliminate or, at least, mask the odor. Keep an incense stand with some incense and a lighter somewhere nearby so you can use it quickly.

Another suggestion: Use lemons to freshen the air. Cut a couple of lemons in half, place them cut-side up in the room where your litter box is – and the scent should neutralize any foul odors.

When your cat leaves a stain, theres usually an odor to go with it. There are a number of products that work simultaneously with odors and stains. Always test for colorfastness in a hidden area of fabric or carpet that you’re planning to treat; some products may cause a permanent discoloration.

According to eHow.com, you can use products you probably already have at home under your kitchen sink. For new stains, youll need a quart of warm water, one half cup of white vinegar, a small amount of laundry detergent (without any bleach) and several white paper towels. First, rub the stain with a cloth or towel with the detergent.

Then, mix together the water and vinegar and slowly dribble the mixture onto the stain. Place the paper towels over the stained area. Walk over the stained area several times to absorb excess moisture. And place some heavy books or objects on top of a layer of paper towels, and allow them to stand on the area from four to six hours. While the area dries, open the windows or use a fan to increase the air circulation. Remove the towels, and the area should be free of odor and stain.

For old stains, perform the same process a couple of times, using detergent, water and vinegar. Blot at least twice. If you smell a stain but cant find it, eHow.com suggests that you use a black light, which you may have to borrow from a teenager. (Urine often glows in black light.)

Removing urine from concrete (such as from a garage) takes some work. Whatever cleaner you use, make sure it does not contain ammonia – because ammonia is already present in old urine. Use an enzyme cleaner such as Natures Miracle Just for Cats Stain & Odor Remover found in most pet shops. “The enzyme not only cleans the stain and removes the odor,” says Brian Small, manager of Pet Quarters in Newington, New Hampshire, “but also breaks down the chemical marker the cat has left behind. This marker triggers the cat to return to the same place to urinate on.”

If your cat has left feces in a place outside her litter box, you must thoroughly clean the area. Again, use a cleaner such as Natures Miracle (which can be used to clean numerous stains unrelated to pets, as well). Once you have meticulously cleaned the area, prohibit your cat from the spot for a couple of weeks to help get her out of the habit of using that place as her litter box.

Sometimes the only way you can get the smell out of a carpet is to replace it. Unfortunately, even that might not completely eliminate the odor if urine has soaked through the carpet and pad and into the underlying flooring. If you’ve decided to remove the carpet and pad, try replacing them with ceramic tile. This durable surface is much easier to clean when theres a cat around.

Removing vomit stains is a bit easier than getting rid of urine stains – if you act right away. Most pet spot removers work well on new and old vomit stains. Follow the directions carefully. The process involves applying a spray to the stain area and covering it with white paper towels. The process may need to be repeated several times, but the results are good.