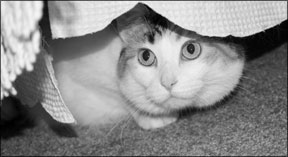 Scout was camped out under the sofa, refusing to eat. The cat’s fearful behavior began when Richard and Sue-Ellen Stillwell Jones’ daughter and her husband came to visit. When they walked into the Fort Collins, Colo., home, Scout looked terrified and disappeared under the sofa.

She didn’t emerge for most of the day, and Jones was afraid that the stress of having strangers in the home, combined with her lack of appetite, would cause the cat’s pancreatitis to flare up.

Mothers’ Effect. The reason: Cats who experience “stranger danger” carry the trait in their genes. Researchers have discovered that friendly male cats produce friendly kittens, Dr. Houpt says. In two separate colonies, according to a 1992 study by Dr. Houpt, Ilana S. Reisner, DVM, Ph.D.; Hollis Erb, DVM, Ph.D.; and Fred W. Quimby, Ph.D., VMD, the trait “friendliness toward humans” was identified disproportionately in offspring of the friendlier of two fathers. Of course, the mother contributes, too, both genetically and environmentally, but the sires who never saw the kittens also influenced them.

Early handling by many different types of people, both children and adults, can help, but only if it occurs during the socialization period, when kittens learn to make attachments to people and to other cats. The period is short, beginning at 2 weeks and ending at 7. In one study, kittens handled for five minutes each day until they were 6 weeks old showed less fear of strangers and unusual or new objects than kittens who weren’t handled. But by the time most people get a kitten at 8 weeks, Dr. Houpt says, it’s too late for socialization to make much difference.

Unfortunately, the problem doesn’t have a simple solution. Fraidy cats are most often found hiding under the bed, and that’s generally the best place to leave them. Set up a safe room where the cat can feel assured that strangers won’t invade his territory.

Jones took Scout’s belongings upstairs to her bedroom so she could have a cozy, comfortable hideaway where she felt secure. The next morning, she sat with Scout until she started eating. By the third and final day with new visitors, Scout felt confident enough to sit on the stairs and watch them for a few minutes. She expresses her fear of strangers by hiding and sleeping more than usual. Other cats may show their anxiety by:

Behaving aggressively, hissing and, if cornered, even scratching or biting. Eliminating outside the litter box. Urinating on or spraying items that belong to their owner, such as clothing or bedding. They’re not being spiteful. On the contrary, they’re helping themselves feel comfortable by putting their scent onto something carrying the scent of a familiar person.

You can’t turn a fearful cat into a social butterfly, but you can take steps to help him feel relaxed in the presence of others. Start by providing a guest-free refuge. Then use desensitization and counter conditioning to reduce the cat’s fear and help him to be more accepting of strangers in the home.

Both training methods use gradual exposure to a negative stimulus to change the cat’s association to a positive one. Desensitization involves exposure to a stimulus at such low intensity that the cat does not respond. Gradually the strength of the stimulus is increased. Counter conditioning is teaching the cat a behavior incompatible with aggression, such as playing with a toy or lying down or simply sitting watching the owner.

Catnip Can Help. If a newcomer will be around for the long term — a new spouse or a family member who will be a frequent visitor — have that person deliver the cat’s meals or offer a favorite toy or treat so that the cat associates the newcomer with good things. He should let the cat approach, however, and not attempt to pet him. Offer catnip to help the cat relax in the person’s presence as well as to stimulate the appetite if necessary.

Rather than approaching the cat with treats directly, the person should look away while tossing treats in the cat’s direction. If the favored toy is a large peacock feather or a fishing pole lure, have the person dangle it in the cat’s direction, again without giving the cat overt attention. Take advantage of the times when your cat is most relaxed or most interested in play for the newcomer to interact. Usually, that’s after meals or at certain times of the day — early morning and late at night, Dr. Houpt says.

Be sure to keep the household routine so the cat remains comfortable. A stressed cat is more likely to respond to a not-so-clean litter box by urinating or defecating outside the box. Don’t give your cat any reason to be more unhappy than he already is.

The worst thing you can do, Dr. Houpt says, is to pull the cat from underneath the bed and plop him onto a lap with the admonition to “be nice to Aunt Betsy.” There’s no good ending to that situation.

Provide Distractions. Instead, when you expect visitors, put your cat in his safe room with access to a litter box, food and water (well separated from the litter box), and toys or other distractions such as a video with birds or fish, or a window seat so he can look outside. Enter the room only at specific times to deliver food, scoop the litter box and give him some playtime or attention. That way, your cat will know what to expect and won’t be afraid of any close encounters of the stranger kind.

Medication usually isn’t necessary unless the cat is not responding to the suggestions given above and the visitor is going to be a permanent fixture in the household. Psychoactive medication without sedation can help and your veterinarian will be able to prescribe the appropriate one.

If you’re the stranger and the scorned party, don’t take it personally. A fearful cat doesn’t necessarily dislike you; he’s simply genetically incapable of responding with immediate affection. He may just need time.