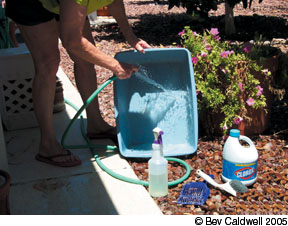 Cleaning your cats litter box is a household chore ranking right up there with cleaning the oven or scrubbing the toilet. But not cleaning the litter box can result in behavior problems that can be far worse to deal with. Some cats will tolerate a certain degree of used litter, says Pamela Perry, DVM, a behavior resident at Cornell Universitys College of Veterinary Medicine. But if the box gets to a point where the smell is really offensive to your cat, behavior problems can develop.

Your cat may let you know – even before a behavior problem develops – whether she approves of the litter boxs cleanliness. When cats use the box, they prefer to have a clean area to go in, says Dr. Perry. If a cat spends little time in the box digging, then there is probably something about the box the cat doesnt like.

The Basics
To keep the litter box from becoming intolerable to your cat and malodorous to you and your family, scoop it every day. The litter box should be scooped at least once a day, says Dr. Perry, and more often if there are more cats. Cleaning the litter box is not only a way to keep your cat using it, but it also allows you to monitor your cats waste elimination. Many health conditions first show up in the box either in excessive or infrequent urination, diarrhea or constipation. Detecting problems early is the best way to solve or manage them.

If you have only one cat, two litter boxes should suffice, preferably placed at different locations in your home. Multiple cat households require more boxes – and more scooping. Placing the boxes at multiple locations becomes even more important to satisfy those cats that may be inclined to hang out in certain areas of your home.

Scoops come in a variety of sizes and shapes. The one you choose should be sturdy, with raised sides to allow shaking off excess litter without the clumps of urine or feces falling back into the box. I recommend metal scoops because they dont absorb odors, says Dr. Perry.

To clean the scoop, you can soak it in an unused toilet bowl or a bucket of water overnight to eliminate dried, caked-on waste material, then just flush. Although its not a good idea to flush large amounts of kitty litter, the bits and pieces soaked off of the litter scoop should not create a problem. In the morning, wipe off the scoop with a mild soap, and allow it to dry before using it again. Having two scoops that can be rotated enables you always to have one handy while one is being cleaned. Another way to keep litter from sticking to the scoop is to spray it outdoors with the silicone used for boats, suggests Dr. Perry.

Cleaning the Box
Some cat owners prefer to line the litter box with plastic to prevent odors from soaking into the box. While liners work well with some cats, other cats dont like the feel or sound of plastic under their feet. And since most cats claw to bury their wastes, the liner will likely become shredded or pulled away from the sides of the box. Liners make cleaning the box easier for some people, says Dr. Perry, but they dont preclude them from scooping daily and washing the box every couple of weeks. To help avoid the shredding, use deeper litter.

Because plastic retains odors, wipe out the litter box every one to two weeks using a mild detergent and water. What you use to clean the box may affect how your cat feels about using it. Avoid anything that has a strong odor, says Dr. Perry. A cats sense of smell is superior to ours. We may like pine cleaners, but cats dont.

Also avoid citrus or ammonia cleaners. Cats typically dont like citrus smells, and ammonia smells like urine. Allow the box to soak and then rinse out the suds so that there is no residual odor. If you can, let the box sit out in the sun to dry once its cleaned out, says Dr. Perry.

When replacing the litter, avoid scented varieties. The perfume is for our benefit, not the cats, says Dr. Perry. Cats simply prefer that you get rid of the clumps and keep the box clean.

If you would like to remove odors from your cats box, add some baking soda to the litter. Stir it around so that your cat does not get it stuck to his feet. Baking soda should not be a problem, says Dr. Perry, unless it affects the clumping capability. Most cats prefer clumping litter.

Newfangled Solutions
During the past few years, manufacturers have introduced self-cleaning litter boxes. Some are designed to be flipped over a screen to remove wastes, while others work electronically. Even though the boxes are considered self-cleaning, they require manual input the same as standard boxes. Some cats appear to do fine with them, says Dr. Perry, but some cats are afraid of the electronic boxes because they make noise. Self-cleaning boxes also lull cat owners into the habit of not monitoring the litter box for health problems. Hint: Its a good idea to do some research on these expensive systems – based on the experiences of other cat owners – before buying.

With a regular box, youll know if your cat has diarrhea or a change in bathroom habits, says Dr. Perry.