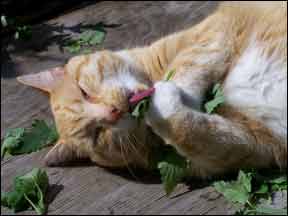 Planters of catnip, beware! This perennial is a member of the mint family – like spearmint and oregano – and it reproduces by spreading runners beneath the soil. Put one catnip plant in your garden and in five years it may well have taken over. Veteran

gardeners plant catnip in buried containers, or in above-ground pots that even the hardiest and most aggressive roots cant escape.

Despite the voracious nature of the plant, however, its worth having around. Carolyn McDaniel, VMD, a consultant at the Feline Health Center at Cornell Universitys College of Veterinary Medicine, says, “Catnip is non-toxic, non-addicting and low calorie. It can definitely play a valuable part of an indoor cats environmental enrichment.”

The entire catnip plant – stem, leaf and seed – is covered with microscopic bulbs that contain nepetalactone. When these bulbs (at the end of sharp hairs called trichomes) reach maturity, they burst, releasing the oil, which then vaporizes upon exposure to air. Just like poison ivy, brushing against the leaves bruises them enough to release the oil from the trichomes, which is why you might see your cat leaning into the catnip. The oil can also be released by insects chewing on the leaves – or by a cat doing the same.

In fact, the catnip plant undoubtedly evolved nepetalactone as an insect repellant. Researchers have found that the chemical is ten times more powerful than DEET at repelling mosquitos. It affects cockroaches and termites, too. The nepetalactone is easily extracted from catnip by steam distillation, but because the oil is so volatile, it doesnt last long, so its usefulness at keeping mosquitos away from your picnic will be limited. (In general, fresh catnip leaves should either be used quickly, dried or stored in a freezer to safeguard their potency.)

Despite cats fondness for munching on catnip, their response to nepetalactone is triggered by the olfactory system (which senses and processes odor), not by the digestive system. Nepetalactone is absorbed by receptors on a cats vomeronasal organ. Oddly enough, even cats without a sense of smell can respond to catnip, due to the unique location of this olfactory organ – in the front of the roof of your cats mouth, above the palate. But despite this location, Dr. McDaniel says “cats dont taste catnip. The nepetalactone has to be inhaled, rather than swallowed, for the receptor to react.”

Dr. McDaniel says that the chemical structure of nepetalectone is unlike any naturally occuring feline pheromone. (Pheremone, like human hormones, produce a chemical reaction in cats that affects their behavior.) Instead, she says nepetalactone seems to have “excitatory and mildly hallucinogenic effects.”

Catnip Isnt for Every Cat.

Not every cat responds to catnip the same way. Some cats become aggressive and may initiate fights with other animals; some get unusually active. “She bounces off the walls,” was how one cat owner described the effect of catnip on her pet. Other cats act drunk, drooling and rolling on the ground. The Non-timber Forest Products Program at Virginia Tech lists the classic response to catnip as the following sequence: “sniffing, followed by licking and chewing with head shaking, then chin and cheek rubbing, and finally a head-over roll and body rubbing.”

Nepetalactones not the only compound that inspires cats to strange behavior. Actinidine and dihydroactinidiolide for example, both do as well. These compounds are both present in silver vine, which explains why the Encyclopedia of Horticulture warns that cats are “put into such a frenzy by the plant that they sometimes tear the plants to pieces.”

According to Dr. McDaniel, you dont have to worry about your cat overdosing on catnip. The response only lasts from five to fifteen minutes, regardless of how much your cat is exposed to. After that, it takes an hour or more before the cats nepetelactone receptors will respond to catnip again. This acts like a built-in safety mechanism, preventing the cat from any danger of overindulgence. As a result, says Dr. McDaniel, “There is no indication that catnip can cause seizures in cats … or any other problem.”

The sensitivity to catnip is an inherited gene, an autosomal dominant trait. This means that only one of your cats parents needs to have the gene for your cat to inherit it. With one parent sensitive to catnip, a cat has a one-in-two chance of inheriting the sensitivity; the likelihood rises to a three out of four chance if both parents react to catnip. As a result, anywhere from ten to thirty percent of any given cat population wont respond to catnip. According to Dr. McDaniel, the color, gender or breed of your cat wont have any correlation to its sensitivity to catnip, since the gene isnt associated with any other traits. Except, perhaps, nationality: Australian domestic cats, for the most part, lack the gene for catnip appreciation, the result of their being descended from a small group of cats which apparently didnt carry the gene.

Kittens younger than six or eight weeks old wont respond to catnip at all, and it may take another month after that before theyre fully responsive. Says Dr. McDaniel, “The reason for this delayed response is another one of the catnip mysteries – it may be that the receptors in the vomeronasal organ need time to develop, or that the catnip response area in the brain may not fully develop until a kitten is eight to twelve weeks old.”

Even really large cats apparently carry the catnip gene. Tigers, lions, lynx, bobcat and cougar are all believed to react to nepetalactone. In fact, some hunters consider catnip oil essential bait for their bobcat and puma traps.

Rats, however, may be repulsed by catnip, although research on this is lacking. Some folk traditions hold that catnip keeps rats away from your house. Perhaps the real reason that planting catnip around your house keeps rats away is because cats are drawn to wherever catnip grows. And if humans are taken aback by the behavior catnip elicits, imagine how a rat feels.