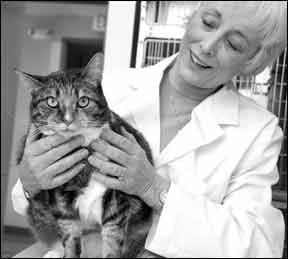 Into the lives of many cats of a certain age comes a certain diagnosis: hyperthyroidism. Susan Steiner’s cat was no exception. At 12 years of age, Grey’s weight had diminished to a mere five pounds. Faced with the less-than-appealing choices of invasive surgery or expensive radiation treatment, she opted for a third choice: medication. Every morning and every evening, Ms. Steiner pulverized a half-tablet of methimazole, carefully mixed the powder with the most appealing canned cat food she could find, and hand fed it to her senior cat. That was 15 years ago. Changes that have since occurred in the world of hyperthyroidism might have made her choices different today.

Age Plays Major Role. Board certified veterinary internist Dr. Arnold Plotnick, owner of New York City’s Manhattan Cat Specialists, describes hyperthyroidism as the most common glandular disorder in cats, second only to diabetes. “There is no breed or gender that is particularly susceptible to hyperthyroidism,” he notes. “By far the major factor is age.”

Is hyperthyroidism actually reaching unprecedented levels, or is its prevalence simply a function of more cats attaining old age and more veterinarians being aware of this disorder? According to Michael Stone, DVM, internal medicine specialist at the Cummings School of Veterinary Medicine at Tufts University, “Autopsies performed prior to the 1970s documented normal thyroid glands in cats, so it’s probably a little of both.”

“In the past, when it pet cats rarely lived past age ten, they didn’t have a chance to develop hyperthyroidism,” notes Dr. Plotnick. “Also, hyperthyroidism was only discovered in 1979, so it’s now diagnosed more frequently. We’re seeing more hyperthyroidism than we did ten years ago — although it seems that for the past five years, it’s been at roughly the same high level.”

Ryane Englar, DVM, practitioner-in-residence and consultant at Cornell University’s Feline Health Center, believes that today’s emphasis on preventative medicine and obtaining baseline health data are rapidly becoming standard parts of an aging kitty’s wellness visits. “It’s not uncommon to unearth a diagnosis like hyperthyroidism far more readily than by waiting for owners to perceive clinical signs on their own,” she notes.

Dr. Stone recalls his first case in 1984 — a physician and his cat that fortuitously arrived soon after Dr. Stone had first read about hyperthyroidism. They had been to two different veterinarians seeking a diagnosis of why the cat was eating excessively, yet losing weight. “The owner was happily surprised to get a quick diagnosis! Since then, I’ve probably treated over 100 cases of hyperthyroidism,” says Dr. Stone.

“While all may be contributing factors, the bottom line is that no one knows why cats develop hyperthyroidism,” says Dr. Plotnick, adding, “Indoor cats may be more susceptible to hyperthyroidism due to their greater exposure to these indoor environmental factors.” “There are more cases around the East and West Coasts than in other parts of the country; this suggests an environmental influence,” notes Dr. Stone. “Hyperthyroidism is probably caused or shaped by many factors, including the environment, diet, genetics, and a multitude of variables we have yet to identify,” says Dr. Englar.

“Cats on Coffee” Symptoms. The “classic” hyperthyroid cat often has one or more of the following signs: weight loss despite good appetite, heightened activity levels, increased vomiting, cardiac disturbances, altered vocalization, thirst, excessive urination, rapid heart rate and high blood pressure. “The cat’s body is sped up by high thyroid hormone levels; essentially making the cat look and feel like it’s had too much caffeine,” says Dr. Stone. “Diagnosis, made by a combination of clinical signs and testing, is fairly straightforward.”

“Veterinarians should be able to first feel the cat’s neck and tell whether the thyroid glands are enlarged,” says Dr. Plotnick. “Ordinarily, these glands are too small to feel. If you can feel them at all, they’re too big!” Further diagnosis involves a simple blood test to measure the level of thyroid hormone, called T4. The “free T4” — an even more precise test — can confirm the diagnosis in cases where hyperthyroidism is suspected, but the T4 is within the high end of the reference range.

Treatment Options: The Big Three.Three standard treatment options for hyperthyroidism have long been available to cat owners — medication to control the raging thyroid hormones, surgery to remove the hyperactive thyroid glands, or radiation to inactivate these glands. “There has been some recent exploration into alternative treatments such as percutaneous ethanol injections and radiofrequency heat ablations; more research is needed to determine the efficacy and safety of these treatments,” says Dr. Englar.

“Oral treatment is classically through methimazole (brand name Tapazole®), which interferes with iodine incorporation,” she explains. “Because iodine is essential for the production of thyroid hormone, this medication this works to “slow” the thyroid, thereby producing less T4 hormone and fewer clinical signs.” Unfortunately, cats need to be on the drugs for the rest of their lives, and nearly half of such treated cats experience side effects.

“It’s now possible to apply a gel to the inside of the cat’s ear; the medication is then absorbed through the skin, rather than having to pill the cat. Medication can also be compounded into a liquid form,” notes Dr. Plotnick. “While these medications are fairly inexpensive, the time, energy and costs involved in administering medications twice a day for the duration of your cat’s life can certainly add up, particularly if your cat is diagnosed at a fairly young age. Going the medication route may make more sense for geriatric cats.”

Surgery to remove the affected thyroid gland is becoming rarer, says Dr. Plotnick. “With the advent of radioactive iodine treatment, there is little point in doing surgery, since removing the thyroid glands is an invasive procedure that requires anesthetization, and may still leave behind pieces of ectopic thyroid that can still secrete excessive thyroid hormone, resulting in a recurrence.” Surgery also can easily damage the parathyroid glands in the process — glands which are vital for regulating blood calcium levels. “In such cases, there is a risk of post-operative hypocalcemia, which can be fatal if untreated,” says Dr. Englar.

One shot of radioactive iodine administered under the skin to inactivate over-productive thyroid cells is considered the “Cadillac” treatment for hyperthyroidism, says Dr. Plotnick, adding, “The vast majority of hyperthyroid cats only need one dose. It’s non-invasive, and in most cases, completely curative.” Dr. Stone agrees, “It’s safe and easy, and in a perfect world, all cases would be treated this way.” Obstacles include the lack of available treatment centers, a hospital stay of several days and a fairly high cost of approximately $1,500 (about the same price as surgery). Additionally, cats with certain secondary medical conditions wouldn’t necessarily be considered good candidates.

Ned Dykes, a veterinary radiologist at the College of Veterinary Medicine at Cornell University, recalls that when he began treating cats with radioactive iodine some 20 years ago, regulations required that they be quarantined — sometimes for weeks — until their urine had the same radiation output “as tap water.” Fortunately, New York State recently changed its rules on radiation exposure, allowing three-to five-day quarantines for pets if there are no children or pregnant women in their household. Some veterinarians and cat owners recommend reducing quarantine times further, in the belief that older cats — some of whom have never spent a night away from home–would undoubtedly recover faster in familiar surroundings. Depending on the people comprising the cat’s household, says Dr. Dykes, releasing cats immediately can be appropriate.