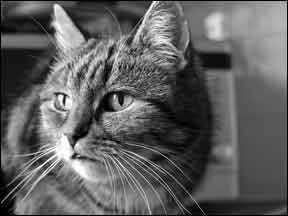 The old-fashioned term “the cat’s whiskers” means the height of perfection. It was popular in the ’20s, along with “the cat’s meow.” Debate ensued regarding the origin of the phrases, but people who used them certainly understood the unique capabilities of your cat’s most sensitive hairs.

When your cat’s whiskers move back and forth, either when he moves them voluntarily or when the tip of the whisker touches something, the mechanoreceptors detect subtle changes in air currents or vibrations and translate these into messages that indicate prey movement or the location of objects like furniture.

Facial whiskers are well-developed on most predatory species to enhance hunting abilities, and their location determines their function. The whiskers on the muzzle augment navigational skills in restricted spaces or in darkness. They extend to approximately the width of the cat’s body. Aside from aiding in navigation, the whiskers on the forelegs collect information about captured prey. Because cats are farsighted, they often cannot see animals in their clutches. The leg whiskers allow them to estimate size, shape and position of their prey.

Cats can also use their prominent facial whiskers’ position and length of their spread to communicate emotion. If they’re shy or afraid, closely bunched whiskers lying flat against their cheeks make their face appear smaller and less threatening. This look can also mean your cat is angry or feels vulnerable and it is commonly seen in cats who are feeding or greeting another cat.

Cats need to sense all stimuli when hunting, playing or walking, so their whiskers will be bristling, fully fanned and bending almost straight forward when they are involved in these activities.

Forcing whiskers into a position counter to their natural alignment causes discomfort and may trigger a swat from a cat with claws fully arrayed. As with other types of hair, whiskers are shed periodically, but not to worry. Others will grow in.