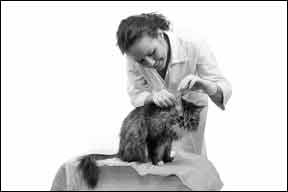 Advances in medications have given veterinarians and cat owners more choices for controlling seizures with fewer side effects. The most commonly used medications are phenobarbital and the newer drugs zonisamide and levetiracetam. “These anti-epileptic medications modify neural transmission in the brain to reduce the number of seizures an animal experiences,” says neurologist Sofia Cerda-Gonzalez, DVM, Assistant Professor of Neurology and Neurosurgery at the Cornell University College of Veterinary Medicine.

Phenobarbital can cause problems if a cat has an allergy to it. In addition, potential side effects include liver disease and increased thirst, urination and appetite. Thankfully, these reactions are rare in cats. Zonisamide and levetiracetam are prescribed on their own or as “add on” medications to lower the amount of phenobarbital needed. Both have relatively few side effects. Potassium bromide, which is frequently prescribed to treat seizures in dogs, cannot be used in cats because it can lead to life-threatening allergic airway disease.

A Daily Dose. Zonisamide has relatively few side effects and a lower level of sedation compared to phenobarbital, Dr. Cerda-Gonzalez says. It can be given once daily, a major advantage considering that some cats can be difficult to medicate. Levetiracetam, in comparison, needs to be administered three times a day and can be more expensive than phenobarbital or zonisamide. Among its advantages: It’s non-sedating and doesn’t have serious side effects.

Numerous diseases can lead to seizures, although the incidence of idiopathic epilepsy (i.e. epilepsy without an apparent cause) in cats is estimated at lower than the 3 to 5 percent seen in dogs. “Typically, we divide them into causes outside the brain (for example, metabolic disease — renal, hepatic, hematologic) and those inside the brain,” Dr. Cerda-Gonzalez says. Many seizures are caused by problems  inside the brain, such as primary metabolic derangement, storage disorders, idiopathic epilepsy, birth defects, poisoning, diseases such as cancer and infections, and injury.

Causes outside the brain can arise at any age. Generally, idiopathic epilepsy strikes young to middle-aged cats. The trigger is unknown. Some cats have seizures after becoming excited and others while sleeping. The two types of seizures are generalized, affecting the entire body, and partial or focal, affecting only a small part or one side of the body.

The symptoms of a partial seizure vary. “For example, they may involve twitching of the facial muscles and chomping movements of the jaw, or may instead involve movements of one or more limbs,” Dr. Cerda-Gonzalez says.

Before a seizure, a cat may sense a change and stay close to the owner for comfort. He needs help to avoid harm that may occur during a seizure, such as a fall down stairs or injury from sharp or hard objects. He’ll also need to be kept safe afterward, as he becomes aware again of his surroundings.

As a seizure begins, the owner should not try to pick up the cat and definitely should not try to move his tongue.  Cats do not swallow their tongues and may inadvertently bite an owner who tries to manipulate the tongue during a seizure. A cat bite requires medical treatment because of the high potential for infection.

The potential for dangerous consequences of seizure activity depends on the length, number and severity of seizures. “We typically consider generalized seizures to be an emergency if they last more than five minutes or if their number exceeds two in a row,” Dr. Cedra-Gonzalez says. “Also, repeated seizure activity has the potential to engender more seizure activity, a phenomenon termed the  kindling effect; so in general it is best to limit the number of seizures as much as possible. We apply these guidelines to our epileptics, who are currently being treated for seizures and whose owners are trying to decide whether to bring the animal to a veterinary hospital for emergency management.”

Loss of Sight.  Just as seizures vary from cat to cat, so does their behavior afterward. “Most commonly, following a generalized seizure, animals are frequently blind, so they may bump into things as they try to walk around,” Dr. Cerda-Gonzalez says. “They may also seem to be out of it — less aware of their surroundings. They may be hungry, and they may forget their litter box training.”

These post-ictal, or recovery, signs are usually temporary but can vary in duration from minutes to days. They typically last longer in animals who have had severe or numerous seizures.

A cat should have a veterinary checkup after the first seizure. The veterinarian will take a detailed medical history to try to determine the cause. Most tests can be done within two days, although results of tests to rule out infectious disease can take longer. Tests may include an MRI of the brain, an examination of spinal fluid or a CT scan.

Other tests, such as blood tests, are needed to find non-neurological origins of seizures. “Certain causes of seizures can prove to be more of a challenge than others, particularly infectious diseases,” Dr. Cerda-Gonzalez says. “With some of them, it can be difficult to differentiate an active infection from previous exposure to an infectious agent. Some diseases may also mask themselves as another disease. For example, infection with a cuterebra larva can at times be difficult to differentiate from a primary vascular accident [a clot or other interference with blood circulation that affects neurons in the brain].”

Treatment with anti-seizure drugs is usually started after more than one seizure, although exceptions are made depending on the severity of the first seizure. Treatment for an underlying disease is generally started as soon as it is identified. The owner’s detailed observation of the seizures is important in determining treatment.

Reducing Frequency.  “The goal of medication is to reduce the frequency and severity of seizures by at least 50 percent,” Dr. Cerda-Gonzalez says. “In addition, we aim for the animal experiencing less than one seizure per six weeks.”

Idiopathic epilepsy can’t be cured. In cases in which a primary cause for seizures is identified, the cause can sometimes be eliminated; but a seizure focus — the area of the cerebral cortex responsible for causing epileptic seizures — may be established, in which case seizures may continue. In either case, cats will need regular veterinary checkups and commonly require medication for the rest of their lives to control seizures. The medication can be discontinued in some cats, but this is a rarity. The encouraging news is that research continues to improve the number of therapeutic options to treat seizures in cats.