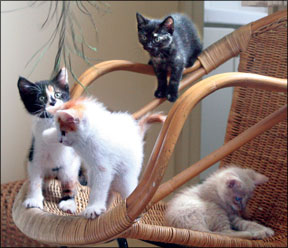 Among all agents of feline illness and mortality, few if any are more pernicious – especially to kittens – than feline panleukopenia virus (FPV). Disease resulting from infection with this virus is called panleukopenia – from the Greek words for all types (pan) of white blood cells (leuko) that are greatly reduced in number (penia). The disease is also known in some circles as “distemper,” a misnomer, notes Fred Scott, DVM, PhD, a professor emeritus of virology in Cornell Universitys College of Veterinary

Medicine and founding director of the Cornell Feline Health Center. “Distemper” refers to a respiratory disease, he explains, and there is no respiratory component to feline panleukopenia.

Cats become infected with FPV – which is classified as a parvovirus – by living in an environment that is contaminated with it or by coming in contact with the urine, feces, saliva or nasal secretions of a cat that is already infected. “Panleukopenia is highly contagious,” says Dr. Scott. “It takes only a small amount of the virus to cause infection, and the amount of virus shed by an infected cat is tremendous – probably anywhere from one billion to 10 billion viral particles per gram of fecal matter, urine or other secretions.”

To make matters worse, FPV is a notably durable virus. Indeed, says Dr. Scott, “Its probably the most resistant virus known in veterinary medicine. Once an area is contaminated, its going to remain so for years unless theres a lot of direct sunlight on it, which will inactivate the virus for a period of time.”

Of course, he points out, decontamination by sunlight can occur only in an outdoor area – a backyard patch of grass or soil, for example – but certainly not within catteries, animal shelters or barns, where cats are apt to share contaminated bedding, cages and food bowls or to come in contact with the hands and clothing of an animal handler who has been tending infected felines.

FPV does its damage by attacking and destroying a cats white blood cells, with the disease manifesting itself most dramatically in the gastrointestinal tract. “This virus requires rapidly dividing cells in order to replicate,” explains Dr. Scott. “As this replication progresses, the hosts white blood cells are destroyed and, in the process, large numbers of viral particles are released. The type and number of dividing cells that are destroyed correlates directly with the severity of the resulting clinical disease.

“This rapid viral replication prevents the normal replacement of the epithelial cells that line the small intestine, which results in diarrhea, vomiting, dehydration, and secondary bacterial infection. The dividing cells within the bone marrow, lymph nodes and thymus gland are also destroyed. And in a newly born kitten infected with FPV, the rapidly dividing cells in the cerebellum are destroyed, which results in ataxia – diminished muscle coordination.”

Dr. Scott describes the progression of the disease as follows: “The clinical signs usually start about three or four days following infection and include fever, severe depression and lethargy, vomiting, diarrhea and dehydration. Although the owner cant see it, there will be a tremendous decrease in the kittens white cell count. Rapid and severe dehydration is the biggest problem. In addition to the loss of fluid, the remaining fluid becomes metabolically out of balance. Secondary bacterial infections are likely to occur, and – without immediate veterinary treatment – the cat will probably die within a few days.”

Fluid replacement, which aims to correct the dehydration and electrolyte imbalance in an affected cat, is the first step in treating panleukopenia. This is usually followed by the administration of antibiotics to curb secondary bacterial infections. “The goal,” says Dr. Scott, “is to keep the cat alive for five to seven days until the immune system response sets in. When that occurs, the virus will be totally controlled and the cat will recover rapidly unless a detrimental secondary infection has set in. But thats an unusual complication.”

According to Dr. Scott, outbreaks of panleukopenia nearly wiped out certain feline populations in the 1700s and 1800s. Until effective vaccines for the disease were developed and properly used in the late 1960s, more than half of all cats in shelters developed the disease and 25 percent to 50 percent or more of those animals died.

In its earliest weeks of life, says Dr. Scott, a kitten is protected against FPV infection because of the natural immunity that has been passed along to it in colostrum – an antibody-rich fluid that the kitten receives from the mother during the first day or two of nursing. This temporary immunity wanes over time and, in general, will no longer be protective in kittens after they reach the age of six to 16 weeks, a period that varies depending on the level of antibodies a kitten has received from the colostrum. From the age of six weeks, kittens must be vaccinated against FPV according to a schedule that will entail booster shots every four weeks until the kitten is 16 weeks of age.

Owners are also advised that good hygiene practices will help to limit the spread of FPV once an outbreak occurs. Routine use of a household bleach solution (diluted 1:32) will deactivate the virus on a cats bowl, litter box and other areas that may have been contaminated.