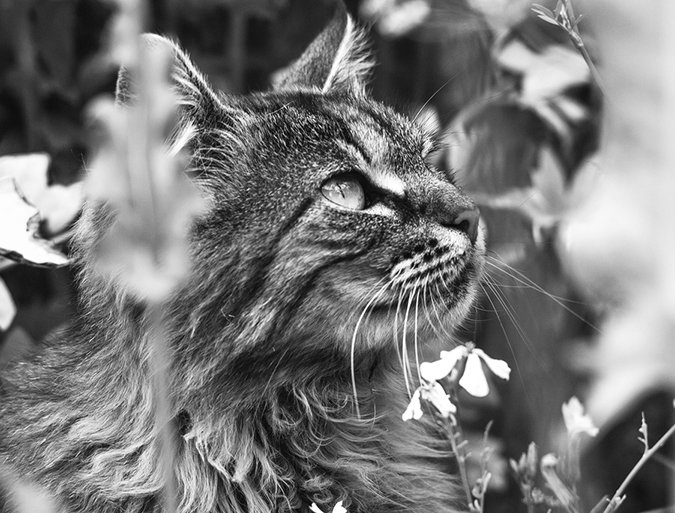 If you think your cat can’t get ticks or the diseases that they spread, emerging evidence indicates otherwise. While cats, unlike dogs, are fairly resistant to tick-borne diseases, they can be affected, says Meredith L. Miller, DVM, ACVIM, a lecturer in small animal medicine at Cornell University College of Veterinary Medicine.

One of those diseases is a merciless killer with a tongue-twister of a name: cytauxzoonosis — more informally known as bobcat fever. “This is a very serious and often fatal disease caused by protozoa called cytauxzoon felis,” Dr. Miller says.

The disease is most likely to strike between March and September, when the incidence of ticks is at its highest. Cats with cytauxzoonosis seem fine one day, sick the next. They develop a high fever, become depressed or lethargic and lose appetite. The protozoal infection prevents blood flow to tissues, resulting in multiple organ failure.

Cats who develop cytauxzoonosis “go down really fast,” says Cornell parasitologist Dwight D. Bowman, Ph.D. Even with treatment, cats can die within a week of infection. The mortality rate is often greater than 50 percent. “There are studies showing that cats die within days of the tick bite,” Dr. Bowman says. Infected cats cannot spread the deadly disease to humans or other cats or dogs.

Despite its name, bobcat fever affects domestic cats as well as bobcats and mountain lions. Bobcats appear to be the main reservoir for the disease, hence the name.

Cytauxzoonosis may develop from five to 20 days after exposure, so note it on your calendar if you find a tick on your cat. Outdoor cats are at highest risk, especially if they live in rural or wooded areas where ticks thrive. City kitties are less prone but not immune from the threat.

The only treatment is a cocktail of antiparasitic and antibiotic drugs, plus aggressive supportive care such as IV fluids and a feeding tube for nutritional sustenance. Some cats may need oxygen or blood transfusions.

Ticks that carry C. felis are the Lone Star Tick (Amblyomma americanum), which is considered the predominant carrier of the disease, and the American Dog Tick (Dermacentor variabilis). These ticks are found in Southeastern and South-Central states such as Arkansas, Florida, Oklahoma and Texas, but that’s not the limit of their range. They are seen as far east as the Atlantic coast and as far north as North Dakota.

“The trouble is Amblyomma americanum is definitely moving north,” Dr. Bowman says. “We know that for a fact. So it is becoming much more common.”

Lyme disease is the most common tick-borne illness. It’s seen primarily in humans but is also known to affect dogs. The disease, which is transmitted by spirochete bacteria through the bite of a tick, causes joint inflammation, kidney disease, appetite loss and lethargy. It’s not known for certain if cats can get Lyme disease. We don’t have a clear answer, but there are reports of cats with Lyme-like symptoms responding to treatment for Lyme disease.

Ticks can also carry Mycoplasma spp., a blood parasite that can cause severe anemia in cats. Other potential pathogens that can be passed by a tick bite include Ehrlichia spp. and Bartonella spp.

Mycoplasma, formerly known as haemobartonella felis, is transmitted by the bite of an infected tick but can also be transmitted from mother cat to kittens or from one infected cat to another during a fight. It’s also possible infected cats could transfer the disease to humans through bites or scratches.

In cats with feline leukemia or feline immunodeficiency virus and even some healthy cats, mycoplasma can cause severe and occasionally fatal hemolytic anemia. Ehrlichia and Anaplasma transmitted by ticks can cause disease in cats, but little else is known about their effect on felines. Cats with Ehrlichia or Anaplasma may have a fever, seem lethargic, lose their appetite and weight, suffer joint pain or have vomiting and diarrhea. Treatment with antibiotics may resolve these signs.

The Trouble with Ticks

Cornell parasitologist Dwight D. Bowman, Ph.D., and other experts say that ticks extending their range remain viable throughout the year in many parts of the country. While cats typically don’t directly transmit tick-borne illnesses to humans, if your cat is exposed to ticks, you are, too.

The kind of tick that attaches to your cat depends on where you live:

In the Northeast: Deer, or black-legged, ticks (Ixodes scapularis) can spread anaplasmosis phagocytophilum and ehrlichiosis to cats. Despite its name, the brown dog tick doesn’t discriminate and may also feed on cats and transmit ehrlichiosis.

South: Cats are at the greatest risk from the Lone Star Tick (Amblyomma americanum) and the American Dog Tick. Both transmit the potentially fatal cytauxzoonosis. They may also encounter the same ticks and tick-borne diseases found in the Northeast. You can identify the Lone Star Tick by the bright white spot on its back.

Upper Midwest: You can expect to see the same ticks and tick-borne diseases found in the Northeast. Cytauxzoonosis is also a threat to cats in this region.

West Coast: Cats may acquire anaplasmosis from black-legged ticks. Those in the Pacific Northwest may also encounter the American Dog Tick, which carries cytauxzoonosis.

Cats are safest from these diseases if they live indoors. Those who go outdoors should receive a routine tick preventive year-round or wear a breakaway tick collar. It’s a myth that cats don’t get ticks and don’t need protection from them. That belief may stem from the possibility that cats groom ticks off themselves more quickly than dogs or that ticks are hidden in the feline fur coat.

“Tick preventives can be either monthly spot-ons, such as Frontline Plus or Revolution, or a tick collar such as a Seresto collar that lasts for eight months,” Dr. Miller says. “It is also important to brush your cat and look for ticks to remove manually if he goes outdoors, particularly in warmer months.”

Some preventives repel ticks or kill on contact. With others, the tick dies only if it bites the cat. “Seeing a tick on your pet does not necessarily mean the preventive isn’t working,” Dr. Miller says.

Talk to the veterinarian about the best choice for your cat.