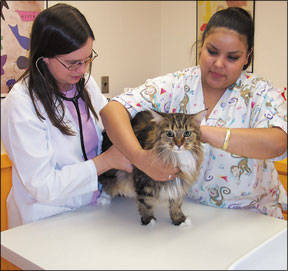 The function of your cats skin extends well beyond its role as the matrix for the animals lustrous haircoat. In a healthy feline, the skin also works, for example, as a barrier against invasion by harmful microorganisms. It serves as a watertight seal, retaining an animals body fluids and preventing dehydration. And it insulates an animals internal organs against the outside worlds extremes of heat and cold.

Despite its normally durable structure, however, every cats skin is subject to a wide array of disorders, most of which are minor and readily treatable. But some untreated skin conditions can rapidly progress to a serious, even lethal, stage, with systemic implications.

Considering the dangerous potential of virtually any untreated skin condition, William H. Miller Jr., VMD, a professor of dermatology at Cornell Universitys College of Veterinary Medicine, strongly urges cat owners to practice what he terms “preventive maintenance.” Keep an eye out, he advises, for any suspicious scratching or hair loss that might suggest the presence of a parasitic, bacterial or fungal infection. Take note of any skin wounds, growths or swollen areas on the skin, no matter how inconsequential they may seem. And seek the counsel of a veterinary dermatologist if any such suspicious signs appear.

“Most skin conditions will not kill a cat,” Dr. Miller explains. “In every case, though, if you overlook or ignore the condition, youre going to have a very uncomfortable animal.”

Among all feline skin disorders, abscesses are, in Dr. Millers words, “first and foremost” in potential severity. An abscess is a localized collection of pus that forms at the site of an infection. (See related article on page 12 of this issue.) Although pus typically contains a certain amount of cellular debris and dead tissue, it is composed mainly of white blood cells that have been summoned by an infected animals immune system to combat invading bacteria or other microorganisms. An abscess may develop at the site of a penetrating wound – if a cat steps on a thorn or a piece of glass, for example. But these infections most often result from bites received during a cat fight.

If an abscess is to emerge, it will usually do so about three days after a cat has been bitten or otherwise wounded. A well-developed abscess will appear as a dome-shaped mass on the skins surface, typically a half-inch to an inch in diameter and either firm or slightly mushy to the touch. Although abscesses may appear anywhere on an animals body, they are most frequently located on the limbs, face, base of the tail and back.

These pus-filled eruptions may also develop internally if a penetrating wound punctures a cats liver or kidney, for instance. If an internal abscess remains untreated and it ruptures, bacteria and pus will pass into the bloodstream. “With all of the toxins circulating through its body, the cat can become septic and die,” says Dr. Miller.

It is possible for an owner to treat a cats abscess at home, although Dr. Miller strongly discourages this since, he explains, “The probability of the treatment being completely successful is pretty slim.” He recommends instead that treating an abscess of any size should be left to a veterinarian. This will ensure that the abscess is expertly drained and cleansed and that the patient receives appropriate postsurgical treatment with systemic antibiotics.

The most frequently observed feline dermatologic disorder is a severe reaction to the presence on the skin of parasitic organisms, especially fleas and ear mites. according to Dr. Miller, flea infestation is mainly characterized by a cats incessant scratching on the back of its neck and chewing or licking the area of its back just above the tail. With ear mites, the cat will persistently shake or scratch its head.

Fleas are the most common of all external feline parasites, and the consequences of infestation, while merely uncomfortable for most cats, can be the source of deadly disease for others. Flea bites cause insufferable itching, and a hypersensitive cats relentless scratching may open wounds in the skin that are vulnerable to serious infection. Moreover, these tiny creatures often carry infectious agents – tapeworm eggs, for example – that can mature in the intestine when a cat swallows them.

Ear mite infestation can lead to mutilation of an animals ears and face, resulting from aggressive scratching. Even worse, a condition called otitis externa – an infection of the outer ear – can progress to the inner ear and damage the ear drum, which can permanently affect the animals hearing and balance.

Flea and ear mite infections are highly preventable and easily treatable. “Once you identify the source of the problem, there are many different treatments, such as ear drops and topical medications, that will get rid of them,” says Dr. Miller.