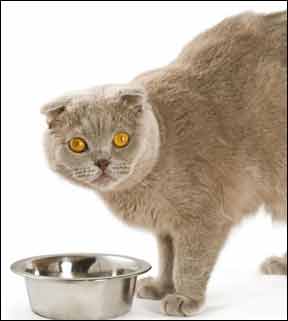 You think to yourself: “Whats the matter with my cat?” For the second time this week, your cat has barely touched his food. You begin to worry if hes sick – or merely sick of the usual mealtime fare. Healthy cats will occasionally eat less or skip a meal, but it isnt normal for a cat to consistently refuse food.

Generally, cats are content eating the same food over and over again. But if your cat refuses to eat for several meals in a row, it should be a cause for concern. The signs of illness can be very subtle, and a loss of appetite can indicate various health issues.

There are also benign reasons why your cat may skip a meal or eat less food. If you switch your brand of food, your cat may simply not like it or may get indigestion from the sudden dietary change. If the new food has a greater caloric density than the old food, the cat will likely decrease his caloric intake accordingly. If you plan to introduce a new food, you should make a gradual dietary transition over a weeks time. Begin the transition by mixing a small amount of the new food into the usual food. Each day, increase the concentration of new food until, after about a week, it constitutes the entire meal.

A cats food intake can also change according to his activity level. If you have an outdoor cat, keep in mind that he may very well be visiting a neighbors house to eat the food they leave out for their own pets.

Cyclical Pattern. Sometimes, cats exhibit cyclical food intake patterns, according to Katherine Houpt, VMD, PhD, and the emeritus Katherine Houpt, VMD, PhD, and the emeritus James Law professor of Behavior Medicine at Cornell Universitys College of Veterinary Medicine. Research shows that when cats have food available ad libitum (free choice), their eating patterns can fall into a cycle lasting from several weeks to two months. During this cycle, a cats appetite will become suppressed periodically. At the low point of this appetite cycle, the cat will eat less, allowing its body weight to fall. After a short time, lasting from a few days to a couple of weeks, the cat will resume its normal caloric intake. Experts agree that an occasional change in the amount your cat eats – or an occasional skipped meal – normally should not be a cause for concern.

And what about the cat who waits patiently while the owner opens can after can after can – finally accepting one as palatable? Although there are no formal studies on this behavior, many veterinarians believe that if a cat is hungry enough he will eat anything, but most cat owners try hard to satisfy the specific tastes of their pets. Experts suggest that you first remain within the same formula, but try a different flavor. If that doesnt work, you can switch to a new brand. Again, a gradual change in food is a smart idea.

Become familiar with your cats habits so that you will notice anything that is inconsistent or unusual. If your cat stops eating for more than a day, you should consult your veterinarian promptly. 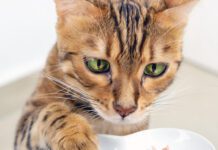