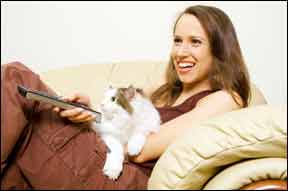 A bored cat is likely an unhappy cat. Just like humans, cats need stimulation; and when left on their own too long, they can experience loneliness and even depression. An unhappy cat may lose or gain weight, stop grooming itself, or become destructive. And a

cat with nothing to do will often sleep the day away instead of getting needed exercise.

For those of us who must leave our pets alone for long hours while at work or elsewhere, the solution is only a click away: Turn on the TV and put on a cat movie.

Even a cat whos shown no interest in Brad Pitts charms or Jay Lenos jokes may lose its nonchalance when shown a movie specially produced for cats. The difference lies in the camera work. Cat videos are scaled for feline sensibilities and shot from a cats viewpoint. The camera focuses on prey just as a cat on the hunts gaze would be, with no superfluous car chases or bubbling fountains to distract attention. Because cat eyes have evolved to perceive movement more acutely than detail, cats usually find the simple moving images on the screen to be captivating.

Videos for cats feature birds, squirrels, chipmunks, fish, insects, butterflies – all the creatures cats love to stalk. The creatures flit, creep, hop and fly across the screen, an almost irresistible lure to feline hunting instincts. Cats, of course, dont understand that the images arent real. Many will watch for hours, focused and intent, just as if they were tracking live prey.

Videos are a harmless way for cats to satisfy their natural instinct to hunt. They can stalk the prey prancing across the screen and paw the images without harm either to live animals or your television set. As a side benefit, the sight of your cat leaping at a cinematic

butterfly can provide plenty of human amusement, too. One owner marveled at her cats determination to catch the flying insect that had appeared on the video: When the insect disappeared from the screen, the cat leaped on top of the television set to catch it as it came out the other side.

The first videos intended specifically for cats were produced about twenty years ago. Since then, dozens of videos have hit the market. Some emphasize a “natural soundtrack”; Kitty Show claims its productions use a special “sepia filter” which “enhances the colors cats see best on TV.” But judging from the enthusiastic testimonials of cat owners, it hardly matters which video you choose.

How to Proceed. Elissa Wolfson, author of 101 Cool Games for Cool Cats, says its best to start with your cat about three feet away from the TV, at eye level. She suggests putting a chair or stool at “pawing distance” from the TV, in case your cat wants to get closer to the action later – although your cat may ignore the stool in order to get as close as possible to the TV. The first time you play the video, focus your cats attention on the screen by darkening the room, turning off radios or other sources of sound, and minimizing the number of people present. Turn on the video and gently tap the TV screen. But, says Wolfson, “dont make a fuss about the video or try to force your cat to watch it.” Not every cat will find the moving images compelling.

Wolfson says she tried everything “short of rubbing catnip on the TV screen” to get her three-year-old cat interested, but it refused to watch. Her one-year-old cat, on the other hand, was almost immediately “mesmerized.”

Most of the videos are designed to operate on an endless loop, providing hours of entertainment without the need for human intervention. Cats delight in watching the videos over and over. Like small children, some cats apparently even memorize their favorite parts. One owner says her cat “frequently seems to anticipate the moves of the animal on screen.” Yet no matter how many times their paws fail to connect, cats continue to swipe at the fluttering butterflies and prancing squirrels on-screen.

Turn off the TV and some cats will continue to stare at the empty grayness, clearly determined not to miss whatever might appear next.