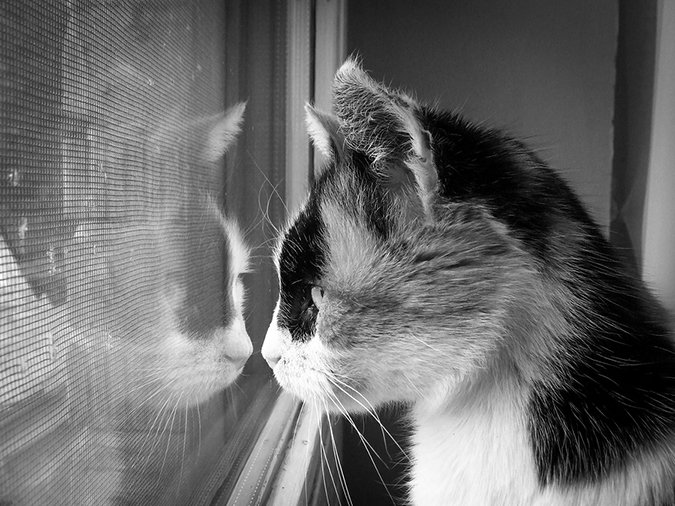 A stray cat has begun visiting your yard and you’ve been feeding him. He’s open to friendly advances and you wonder if he would benefit from a real home. Or perhaps following a close call, you wonder if your indoor cat, who frequently goes outside, should remain in the house for safety’s sake.

One significant challenge you may face in transitioning an outdoor cat indoors is an existing cat who doesn’t welcome newcomers and attacks the new cat, says behaviorist Katherine A. Houpt, VMD, Ph.D., professor emeritus at Cornell University College of Veterinary Medicine and former president of the American College of Veterinary Behaviorists.

The reverse can happen, too, when the newcomer stresses an existing ill or elderly cat. “One owner I know had to divide her house so each cat would have his own space — obviously not an ideal situation for either the cats or the owner,” Dr. Houpt says.

If you do have a resident cat, let him get used to the new companion slowly. Keep the new cat in a separate room temporarily and let them initially mingle only for short periods under supervision, all the while bestowing generous attention and treats upon your resident cat.

Be sure to have as many litter boxes as cats in your house, plus one extra — for example, three litter boxes for two cats. Your formerly outdoor cat may have an easier time eliminating indoors if you use very fine grain litter, which is most like the sand or soil he would have been using.

Another challenge is that some former strays brought inside keep scratching at the door and yowling to return outside. They may also try to escape at every opportunity. “A product that can help is called Ssscat,” says Dr. Houpt. “The owner can set it to go off whenever the cat crosses a motion-detecting beam — for example, while attempting to sneak out the door. When it goes off, the compressed air makes a loud hiss rather like a mountain lion’s hiss!”

In that case, it’s best to have such deterrents come from sources other than the owner, says Dr. Houpt. “Human timing between stimulus and response is notoriously poor, so the cat may not associate his behavior with the consequence. Also, you don’t want your cat to think you are doling out unpleasant surprises and dislike you as a result.”

Owners can take steps to help reduce the anxiety a former outdoor cat might face. One is to provide him with an outdoor cat enclosure — sometimes called a catio. “Cats with access to the outside seem to experience less stress,” Dr. Houpt says. “The bigger the area you can provide the better, but even a small outdoor space is better than none at all. If at all possible, the enclosed area should contain some grass to munch on or even a small tree to scratch.”

Another way to make life more fulfilling: Enrich the environment. “Cats like to look out windows and see birds,” Dr. Houpt says. “They will greatly appreciate a viewing perch, such as a cat tree. You can also simulate outdoor life by playing games that allow them to stalk and hunt ‘prey’—such as a tossed catnip mouse or a wand with dangling feathers like Da Bird. I also recommend the CatDancer, a bouncy wire with rugged cardboard dangles, which moves in intriguingly erratic ways. Laser pointers make a dot of light that owners can wave for their cats to chase. And treat balls with holes that release kibble when batted around can keep life interesting while you are away.”

Many cats are content with a guaranteed food source and comfortably settle into indoor life, says Dr. Houpt. “Others may be more wired for the environmental interactions that come with an outdoor life. Over-the-counter supplements that may help a cat calm down are available. Some nutraceuticals, like Solliquin (alpha-lactalbumin), contain milk proteins, which act like natural Valium. Green tea extract such as Antitank may also help. There is also a new product called Feliway Multicat, available from veterinarians. It is from Ceva and is especially designed for multi-cat households, which can help with the transition.”

Dr. Houpt has witnessed many successfully transitioned cats during her years of practice. “One of my clients took in an outdoor cat — a 12-year-old Persian, who at that point had only one tooth. He was perfectly happy to have the soft meals and a warm cat bed provided for him indoors.”

For most cats, Dr. Houpt doesn’t think we are asking too much of them to live their lives indoors. She says the goal is to mimic the adventures of the outdoors but without the dangers.