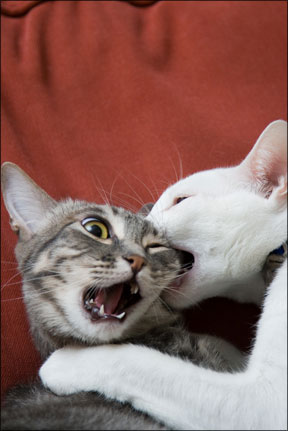 While fighting among cats is not typical behavior, it certainly does happen in the multicat household. Read on to learn some reasons why cats pick fights with each other – and what you can do about it.

All kittens play, practicing to defend themselves by arching their backs, jumping on each other, chasing each other and maybe exchanging a few nips on the ears. “The difference between playing and fighting,” says Katherine A. Houpt, VMD, emeritus professor of animal behavior at Cornell Universitys College of Veterinary Medicine, “is that when playing, cats take turns chasing each other. There isnt one dominant aggressor or one main victim. Nobody hides.”

What Fighting Looks Like. In general, cats dont play much after 16 months of age, and males are more likely to engage in play of this kind. As for fighting, cats will fight at any age. “True fighting is usually more of a one-way process,” says Dr. Houpt. “One cat will be the aggressor, and the other will be the victim. Hissing, clawing and batting with the paws are more fear-directed than playful. The noisier the interaction, the more likely its a fight and not play.”

Heres the typical scenario: One cat is sleeping peacefully on the couch. Your other cat is sitting on the window sill near the couch, watching the goings-on outside. A strange cat comes rambling by close to the house. The two cats – one inside, one outside – stare at each other. The cat outside, seeing that your cat cannot reach him, dares to approach the house even closer.

Your cat gets furious, maybe jumps at the window but cant do anything to thwart that daredevil glaring at him from outside. In his anger and frustration, your cat finds the next best cat to attack – the innocent, sleepy kitty on the couch. (For humans, its like getting mad at your boss and then coming home and yelling at your kids.)

Another reason cats fight is over their favorite place to sleep, says Dr. Houpt. If one cat finds another in her napping spot, she might attack to get her spot back. “This kind of aggression is more status-related,” says Dr. Houpt. “Its like your cat saying, This is my spot, which is different than true territorial aggression which signifies, I want you out of this house altogether.”

Territorial aggression occurs most commonly when another cat is introduced into the household. “But its not always the newly-adopted cat who get picked on,” says Dr. Houpt. “Sometimes its the other way around. You can usually tell who the aggressor is: One of the cats – either the adopted one or the original cat(s) in the household will seek out the other and fight with it.”

Cat fights are also triggered when something changes about the cat, especially its scent, says Dr. Houpt. This can happen by bathing a cat, taking a cat to the veterinarian, or taking your feline to a cat show. “If one cat gets outside, the other cat at home may attack it because the cat has picked up some strange odors outside,” says Dr. Houpt.

Stopping Attacks. Luckily, many cats stop short of fighting on their own. One cat will swallow its pride, walk away and let the other cat be the reigning feline in the house. But when there is a lot of fighting that renders one cat fearful – or theres the possibility of injury – you should stop the fight. Here are some tips to stop fights and also prevent them:

Distraction Helps. If your cats are really going at it, use distraction as a means of stopping the fight. Make a loud noise or spray them with a water bottle, if necessary. Dont physically try to separate them because you could get clawed yourself, says Dr. Houpt.

Consider Separation. If fights continue between two particular cats, you may need to separate them for a full week, keeping them in different areas of the house. Then you can slowly reintroduce them.

Scent Exchange. Exchange your cats scents so they will seem more familiar with each other, especially when introducing a new cat into the home or if your cat has picked up a strange odor from the outside. “Take a cloth and rub each cat on the cheeks and top side of the tail where the scent glands are located,” says Dr. Houpt. This helps mingle their scents, and they should feel less threatened by each other.

Block Outside Forces. For redirected aggression, try to prevent strange cats coming into view outside your window. This is, of course, difficult to do. One suggestion: “Use window wallpaper on the glass,” says Dr. Houpt, “which prevents people from looking in – or your cat from looking out. Place it at the bottom of your window, so that light can still come in.”

Medication As Last Resort. If all else fails, your veterinarian may prescribe medication for both cats – to decrease aggression in the attacker and to decrease fear in the victim.