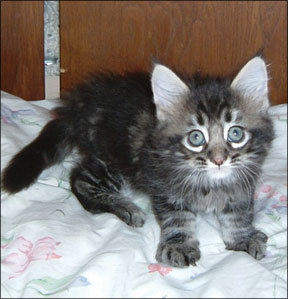 You should be pleased to see your cat, at the age of seven, looking terrifically fit and behaving with the same mischievous vitality that she did when she was a kitten. Bear in mind, however, that the feline age of seven is equivalent to the age of 41 or so in

a human, and your cat as trim and spirited as she is at present is bound to start showing the normal signs of aging before you know it.

Indeed, full membership in the senior citizen class is, for your cat, just a few short years away. The World Health Organization categorizes people between the ages of 60 and 74 as “elderly” and those who are 75 and older as “aged.” Applying the accepted human-to-cat age formula, an elderly cat would be between the ages of 12 and 15, while an aged cat would be 15 years of age or older.

Age-related physical and behavioral changes may appear subtly at first but will no doubt become more obvious as time passes. Knowing what (and what not) to expect can be very useful. It will help you distinguish normal changes from those that may be associated with a serious physical disorder.

Ilona Rodan, DVM, hospital director at the Cat Care Clinic in Madison, Wisconsin, often treats cats that are in their early twenties the human equivalent of 100 years of age and older. However, she notes, the age of seven is not too early to start looking for signs of aging.

Following are some of Dr. Rodans general observations regarding the physical and behavioral characteristics of elderly cats:

“Cats tend not to groom as much when they get older,” says Dr. Rodan, “so their coats may become unkempt, matted and less glossy. And because of stiffness in their joints, which is often caused by arthritis, they may not use their scratching posts enough to keep their claws trimmed and in good condition.” Consequently, she advises, owners have to be increasingly attentive to grooming their cats as the animals get older.

Loss of hearing and decline in visual acuity may become noticeable in some cats by age 15 or 16, according to Dr. Rodan, but these problems are not generally characteristic of the aging feline. “Gradual loss of hearing is the more common of the two,” she notes, “and serious decline in vision tends to occur in older cats with high blood pressure.”

Severe dental problems intensify with age, she points out, and the accompanying pain, risk of systemic infection and inability to chew effectively increase significantly as a cat ages. These health challenges are not direct results of the aging process but are generally attributable to the lack of attention paid to a cats dental hygiene during its younger years.

Due to a natural loss of motility in the intestines, cats tend to experience constipation increasingly as they age. Indeed, says Dr. Rodan, “Ninety percent of the constipated cats that I see are in their teens. Owners of older cats should watch for signs of constipation such as pain or straining when defecating, or absence of bowel movements–because there are things that veterinarians can do to help relieve the problem.”

While the ability of the feline immune system to ward off disease naturally declines as a cat grows old, Dr. Rodan says that “we dont often see problems associated with this.” She adds, however, that a naturally impaired immune system may make an elderly cat more susceptible to infections spread by kittens in the same household.

As a rule, sleeping patterns do not change noticeably in older felines, although it is not uncommon for an elderly cat to roam the house noisily during the night. Any dramatic change in the length of time a cat sleeps during a 24-hour period should be brought to the attention of a veterinarian, Dr. Rodan advises, since this could be a sign of disease.

Compared to their eating habits when they were young, older cats tend to prefer smaller meals, and they like to eat several times during the course of a day. In most cases, this is merely a reflection of their naturally changing metabolism. Any cat that either starts eating voraciously or shows a total lack of interest in its food should be seen by a veterinarian.

An aging cats litter-box behavior often changes for the worse, frequently due to stiff joints that impede the animal from hopping into the box. Dr. Rodan advises owners of elderly cats to provide multiple litter boxes, placed strategically throughout the house, or to use a three-sided litter container that enables an animals easy access to it.

“Many cats can live into their mid-teens and early 20s,” says Dr. Rodan. “The key to making sure that a cat has a happy and healthy old age is to start taking good care of it when it is a kitten. Groom the animal regularly, for example, and take proper care of its teeth from the start.” Also, she advises, all cats, regardless of their age, should have a thorough physical exam at least twice a year and perhaps more frequently than that as they advance into their senior years.

For additional information on caring for your senior cat, see “The Special Needs of the Senior Cat,” viewable at www.vet.cornell.edu/fhc/brochures/seniorcat.html.