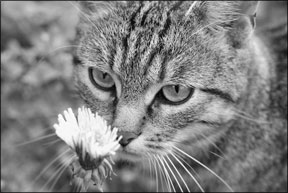 Cats, even those who live strictly indoors, are never completely safe from venomous insects. All it takes is a wayward bee or wasp to slip through an open door or window and catch your cat’s attention. His innate prey drive can kick into gear as he leaps and tries to swat and eat the flying insect. In reaction, the bee delivers a painful sting.

“Most bee or wasp stings occur on a cat’s front paw or face,” says Elisa Mazzaferro, DVM, Ph.D., who specializes in emergency and critical care at the Cornell University Veterinary Specialists Center in Stamford, Conn.

If your cat does get stung, don’t panic. In most instances, mild swelling or tenderness will develop at the sting site. Your first step is to remove the stinger as quickly as possible to slow the spread of venom in your cat’s body. The stinger, which combines a poison sac with sharp lancets that deliver the venom, can pump it into a cat for up to three minutes after being separated from the bee, Dr. Mazzaferro says.

If the stinger is visible in the coat, use a credit card to scrape it out. Never try to squeeze the stinger out with tweezers because the venom sac may rupture, further exposing your cat to venom. Try to keep your cat quiet and calm, and apply a cool compress — a wet washcloth wrung of excess water — to the sting site to reduce swelling. “Do not use icy cold compresses or ice wrapped in a towel because they can cause the pet to shiver — stick with cool compresses,” Dr. Mazzaferro says.

OTC Remedies. Monitor your cat and contact his veterinarian if the swelling grows and spreads. Most likely, you’ll be advised to give an over-the-counter antihistamine. Select one that contains only diphenhydramine, such as Benadryl. Keep the medication in your pet first-aid kit to be prepared for such an emergency. Ask the veterinarian for the correct dose for your cat’s weight. Some OTC products for people contain acetaminophen, a commonly used pain reliever that can be toxic to cats. Others may contain xylitol, which has been shown to cause liver failure in pets. Still others may contain cherry flavoring and are meant for children, not pets, who do not like the flavor.

Going Into Shock. Some cats, like people, are extremely allergic to insect bites. The area around the sting site balloons in size, and within five to 10 minutes, the gums change from pink to white. Cats can start vomiting and drooling, have difficulty breathing, become confused, and go into anaphylactic shock. They can die if they do not receive immediate veterinary care.

Taking a pet first-aid class can teach you the steps to take when minutes count and the best way to stabilize your cat to transport him to the veterinary clinic. Dr. Mazzaferro highly recommends that you call the clinic en route so that the veterinary team can have an exam room ready when you arrive.

Cats with severe reactions to insect stings often require treatment with IV fluids to prevent shock. Veterinarians administer steroids that act as anti-inflammatory agents and antihistamine injections to reduce the swelling. Expect your cat to remain under supervised care at the clinic for one to three days until his veterinarian says he’s healthy enough to return home.