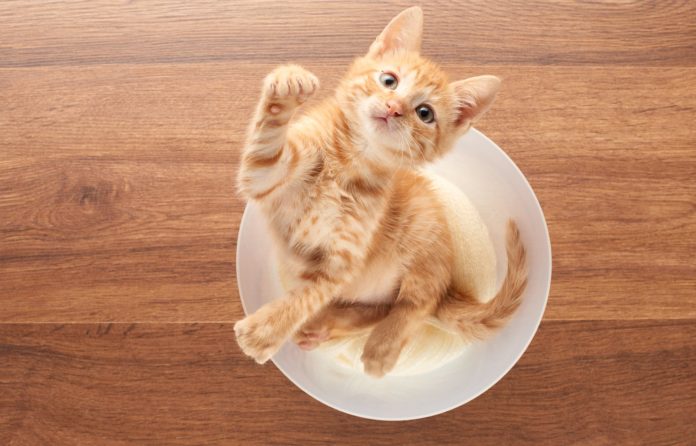 All cats have their habits and routines, along with favorite activities. But sometimes behaviors get over the top and cross the line into compulsions. Compulsive behaviors can indicate an underlying problem in your cat and can potentially cause other problems.

A compulsive behavior is something that a cat does that either isn’t appropriate for the situation or is excessive, such as excessive grooming, self-mutilation, pica (eating non-food items such as paper, rocks, or hair), and sucking on fabric.

Veterinary behavior consultant Pamela J. Perry, DVM, PhD, says, “In general, compulsive disorders typically arise in situations of repeated conflict or frustration during which the animal lacks control. Conflict occurs when the cat is motivated to perform two opposing behaviors (e.g., approach-withdrawal).Frustration occurs when the cat is motivated to perform a behavior but is prevented from doing so (e.g., when a cat wants to oust an outside cat from his territory but is unable to get the intruder through the window).” Not sure what to do to resolve the situation, the cat channels his energy into another, often familiar activity, such as grooming.

If the scenario replays enough times, the behavior can become the cat’s go-to response to that stressor and may then be generalized to others.

There is probably a genetic aspect to the development of compulsive disorders. If you got your cat from a source where you know his parents, ask about compulsive behaviors in close relatives or observe for them yourself. “There is a genetic predisposition for the compulsive behavior, pica, in Burmese and Siamese cats,” says Dr. Perry.

“If a cat starts to display behaviors that are excessive, unusual, or out of context, the owner should seek help from a veterinarian,” says Dr. Perry. An example of an out-of-context behavior would be swatting at a fly when there isn’t a fly present.”Likewise, if the cat performs behaviors that may be self-injurious (eating plastic, self-trauma from licking or biting), then a visit to the veterinarian is warranted.”

Before a cat is diagnosed with a compulsive disorder, medical problems should be ruled out. Many things can cause the brain to malfunction: toxicity, trauma, malnutrition, cancer, hormone imbalances. Your veterinarian will likely run a chemistry panel and complete blood count (CBC) and may do x-rays. Magnetic resonance imaging (MRI) or computed tomography (CT) scan may be done to check for a tumor or other defect in your cat’s central nervous system.

If medical causes have been ruled out, it’s time to make some lifestyle changes to help your cat. Your goal is to prevent your cat from performing the compulsive behavior (especially if it is harmful), distract him if he starts, and engage him in positive alternative activities.

Prevention: Prevent compulsive behaviors by figuring out which situations trigger the behavior and avoiding them. Keeping a journal of when the cat demonstrates the compulsive behavior can help. Is there a neighbor cat who comes too close to the house? Does another cat prevent him from getting to the water bowl?

Once you have identified one or more stressors, try to alleviate them. Discourage the neighbor cat from coming near your house, or block your cat’s access to the window where he can see the other cat and move his perch to a different spot. If possible, create a routine for your cat. Stick to regular feeding schedules, and develop a routine for when you need to leave for work, which may include providing a special treat or toy when you leave.

Distraction: “Punishment should be avoided to avoid causing or exacerbating fear or conflict,” says Dr. Perry. If your cat starts to display a compulsive behavior, interrupt him by giving a command that he knows or making a loud noise (avoid something that will scare him and cause additional stress). Once the behavior has been disrupted, give him something better to do, such as playing with him or giving him treats.

Engagement: Enrichment activities will help to keep your cat’s mind stimulated. Keep old favorite toys around, but periodically add in new ones. Give him boxes and paper bags to play with and see if he enjoys watching videos made for cats. As cats are predators, toys that play on his hunting instinct are a great option. These can be toys that move or ones stuffed with treats or catnip. Puzzle toys that he has to manipulate to get the treat out are another fun option.

Depending on the severity of the disorder, success of environmental management, and risk of the cat injuring himself, behavioral medications may be prescribed by the cat’s veterinarian.

-Use enrichment that gives the cat opportunities to engage in desirable behaviors (climbing, scratching, etc.)

-Identify and remove or minimize stressors that may lead to conflict

-Engage the cat in any activity that is incompatible with the compulsive behavior (interactive toys, bird videos, etc.)