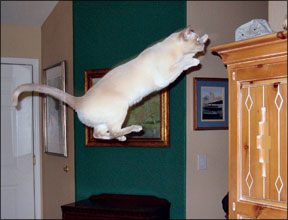 If you asked Mother Nature, “What is the most athletic animal in the world?” She would most likely answer “the cat.” If in doubt, watch your feline in perfect, graceful flight up the kitchen table to the inside of a cupboard – without touching a thing. Your cats agility and sense of balance is one of her most outstanding

features. Heres how it works – and how it can go awry.

Biologists say that cats havent changed for the past ten million years. “The big cats, such as lions, tigers and jaguars, and the small cats are almost identical in their agility and flexibility,” explains Mark Lotz, panther biologist with the Florida Fish & Wildlife Conservation Commission. “If you watch cats hunt – large or small – they all possess the same skills of pouncing, stalking low to the ground and launching off at top speed to chase their prey.”

These acrobatic abilities are possible because of the structure of their skeletons, especially their spine and shoulders.

Compared to humans and dogs, cats are superior athletes. Besides having an enhanced body structure, “The neurological transmission is faster in cats than in dogs,” says Patti Schaefer, DVM, a veterinarian in private practice in Olympia, Washington. “This means the signals are faster from a cats brain to its body – and vice versa – than similar transmissions in dogs. Therefore, cats can respond faster to signals from their environment, such as seeing a mouse crawling along in the grass.

The extra lumbar and thoracic vertebrae account for the cats enhanced spinal mobility and flexibility, compared with humans. (Among cats, the exceptions are the Manx and Bobtail cats that have no tails and have fewer caudal vertebrae than other felines.) The flexibility of the spine allows the cat to twist in midair, such as when a cat jumps up from the floor and lands – perfectly balanced – on a narrow window sill.

The tail: “The tail acts like a rudder,” says Mark Lotz. “When the cat takes sharp turns, the tail will lean to other side, enabling the cat to go at a fast pace without losing balance. Because the Manx and Bobtails dont have tails, they have more trouble with balance than other cats.”

The Scapulas: Another anatomical feature unique to felines is the structure of the scapulas (shoulder blades). When you see your cat stalking long and lean to the ground, the scapulas are at work. “In the cat, the muscular attachments between the scapula and the trunk (body) are different than in dogs, allowing cats to crouch low during stalking and hunting activities. The trapezius muscle attaches the dorsal (top) edges of the scapulae to each other, rather than attaching the scapula directly to the body, as in dogs. This looser attachment of the trapezius in cats allows for more freedom of movement of the scapulae, allowing the body to sink lower between to two thoracic limbs. This can be seen in pictures of crouching cats, as the tops of the scapulae protrude above the top of the back,” according to Dr. Paul Maza, lecturer in the Department of Biomedical Sciences at Cornells College of Veterinary Medicine.

In addition, “The clavicles (collar bones) of cats are considered free-floating (not fixated like in humans), allowing cats to pass their body through any space into which they can fit their head,” says Dr. Schaefer. (Dogs, with only remnants of a clavicle – if any at all – can also squeeze into very tight spaces not suitable for humans.)

The cats front legs are equally impressive. “Cats can rotate their legs back and forth – (called pronation and supination) at a much

greater range than other mammals,” says Dr. Schaefer. “The best comparison is what you do when you scoop up soup and put it in your mouth.”

With the exception of cheetahs, felines have retractable claws that allow the cat to silently stalk its prey. You may have noticed a little protrusion (like a sixth finger) located on the inside of the cats wrist. This is the carpal pad, also found on the paws of the big cats and dogs. Experts believe this pad helps to prevent skidding while jumping.

Like all felines, according to biologist Mark Lotz, cats can walk very precisely because they directly register; that is, they place each hind paw (almost) directly in the paw print of the corresponding forepaw. This not only minimizes noise and visible tracks, but also provides sure footing for their hind paws when they need to navigate rough terrain.

Whiskers: A cats whiskers help with both balance and deterimining the width of a space. Located on their upper lips, cheeks, chin and over their eyes, the cats whiskers, according to Lotz, help cats feel their way as they move, especially at night. The whiskers are like tiny fingers transmitting information to the brain. “Theyre an important part of the cats kinesthesis – awareness of its body and motion in space – which is essential to hunting and survival,” says Dr. Schaefer.

When Your Cat Loses His Balance

Like all athletes, cats can suffer injuries or develop conditions that impede their normal flexibility and balance.”Cats can have pre-existing hip and spine problems that show up later when the cat gets more active,” says Dr. Schaefer. “Arthritis can come on at any time. We see that especially from overtraining for agility contests.”
In fact, if you plan on entering your cat in an agility contest, your veterinarian should make sure there are no underlying neurological, muscular or joint problems that might affect your cats health or performance, she says. But cats who dont publicly perform can have also suffer from problems that impact their agility,” says Dr. Schaefer. Symptoms include:

–The inability to jump anymore – or not wanting to jump on or off high places like they used to.

–Excessive licking over the hip area, which may indicate pain.

–A change in gait, such as dragging of the feet.

–Crying out, especially when you pick up your cat or touch certain areas.

–Fatigue or lack of interest in running and chasing like she used to.

Many of the conditions that cause these symptoms are treatable, says Dr. Schaefer. So dont delay in seeking medical advice if you notice a change in your cats behavior.