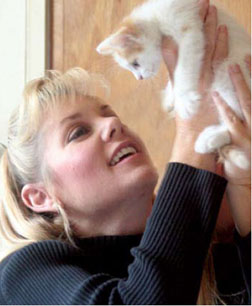 Feline reproductive-system disorders are fairly common, especially in females. Owners would thus do well to know about these complex arrangements of organs and glands and to be aware of the disorders that may affect them and in some instances even pose a lethal threat.

In almost every respect, the anatomy of the feline reproductive system corresponds directly to that of humans. The female systems major components include the uterus (an organ in the lower abdomen in which fertilized eggs – or ova – develop into kittens); the ovaries (two small organs that produce the ova along with the hormones estrogen and progesterone, which are crucial to the reproductive process); the vulva (the external genital structure located just below a female cats anus that serves as the entrance to the vagina); the vagina (the narrow passageway leading from the vulva to the opening of the uterus – the cervix – through which male sperm is transported); and the mammary glands (milk-secreting structures located on the underside of a cats chest and abdomen).

Likewise corresponding to its human counterpart, the male cats reproductive system includes the penis (the organ of copulation); two testes (glands that secrete the male hormone testosterone as well as sperm and are enclosed in a fur-covered sac – or scrotum – that is positioned just below the anus); two bulbourethral glands (which discharge an important constituent of seminal fluid); the prostate gland (which secretes the fluid component of semen); and the ductus deferens (a tube that carries sperm from each testis to the urethra, a channel within the penis through which semen is transported during copulation).

There are, as might be expected, a few differences as well. For example, a female cat has two rows of four or five mammary glands and nipples, while human females are equipped with just two. “But the main anatomic difference between the human and feline systems is that a female cats uterus is Y-shaped, whereas the human uterus is pear-shaped,” notes Michelle Kutzler, DVM, PhD, an assistant professor of clinical sciences at Oregon State Universitys College of Veterinary Medicine.

The two long arms of the Y – called “horns” – extend from each ovary, she explains, and join at the short stem of the Y, which is the uterine body. “This seems to be an evolutionary advantage,” says Dr. Kutzler, “since cats are litter-bearing animals and the linear components of the Y-shape increase the surface area for placental contact and nourishing.”

In male cats, the sole unique feature is an array – rows and rows – of tiny, sharp projections that encircle the end of the penis. “Unlike women, who ovulate spontaneously every month,” says Dr. Kutzler, “female cats only ovulate when stimulated, and the most obvious stimulant in mating is physical contact with these barbs. When the males penis is in the females vagina, the stimulation initiates a neuroendocrine reflex that leads to the production of a female hormone that results in ovulation.”

Regarding true reproductive disorders in the male cat, Dr. Kutzler cites blockage of the urethra as the most frequently seen. She explains: “This duct, which transports urine and semen to the outside, can become obstructed with plugs and stones that normally would pass in female cats, but are unable to move through the longer and narrower male urethra. This can be a fatal condition.”

Cryptorchidism is a congenital reproductive-system disorder marked by the failure of a male cats testes to descend into the scrotum. Though comparatively rare, the condition occurs with “some frequency,” says Dr. Kutzler, noting that the disorder is reported to be present in between one percent and three percent of male cats.

High on the list for males, she says, are injuries to the reproductive tract – bite wounds on the penis or scrotum, for example – that are inflicted during mating by a reluctant female and result in infections that can become systemic and life-threatening. As for malignant growths in the male reproductive system, she points out that prostate cancer is “extremely rare” and that, to her knowledge, no cases of feline bulbourethral cancer have ever been reported.

Overall, however, Dr. Kutzler says that male cats have far fewer reproductive disorders than do females.

Many or perhaps most of Dr. Kutzlers patients are female cats with disorders associated with their heat cycle (estrus). The owners are often breeders, and the disorders frequently have to do with an animals fertility or absence thereof. The problems include anestrus, a condition in which a female never goes into heat; persistent estrus, in which the animal is always behaving as if it is in heat, with the result that the owner cant determine the appropriate time for breeding; a females refusal to mate with a male, although showing all of the behavioral signs of readiness; and females whose heat cycles are normal but who never become pregnant after mating.

Among the many reproductive-system disorders she treats that are not directly linked to fertility, Dr. Kutzler cites the following two as the most common:

Pyometra, an infectious disease with potentially serious complications, which begins when the lining of the uterus (endometrium) becomes thickened and crowded with large, fluid-filled cysts. Bacteria from the vagina then migrate into the uterus and cause this life-threatening infection.

Ovarian remnant syndrome, a condition in which a fragment of an ovary remains in the animals body following the spaying operation. The remnant, although perhaps tiny, will still release hormones, and the affected animal will continue to display the behavioral signs of estrus.

Also relatively common among reproductive system disorders in female cats, says Dr. Kutzler, are ovarian tumors (often malignant), mammary gland cancer, inflammation of the uterus (metritis), accumulation of mucus in the uterus (mucometra), and uterine or vaginal prolapse, in which these organs protrude out of their normal position.

To diagnose a reproductive system disorder, Dr. Kutzler will typically rely on a complete blood count and chemistry panel; she frequently relies on ultrasound imaging as well. In many cases, she says, “I can make at least a tentative diagnosis during the course of a 20- or 30-minute interview with the owner. If, for example, the owner tells me the cat was spayed when it was four months old and now, six or eight months later, its howling and putting its rump up in the air for four days at a time, thats proof enough that the animal is cycling and therefore must have an ovarian remnant.”

Treatment depends, of course, on the nature of the condition that is diagnosed and on the cost involved. Some cases – especially those involving extensive surgery and a hospital stay of, say, five or 10 days – can be, as Dr. Kutzler puts it, “quite expensive.” Indeed, elaborate surgery or protracted treatment for serious infection or cancer are likely to be very costly.

As is true for most feline medical conditions, the earlier a reproductive disorder is recognized and treated, the better. Dr. Kutzler urges owners to be on the alert for signs of these conditions and to seek prompt veterinary care.

For unspayed females, she advises, “Watch for the signs of systemic infection – depression, anorexia, vomiting, excessive water consumption and vaginal discharge that is either bloody or mucoid. And notice changes in the cats behavior. If your female has been spayed and still shows signs of being in heat, she may well have an ovarian remnant. For both spayed and unspayed females, check the underside of the chest and abdomen periodically for any lumps that might indicate the presence of mammary cancer.”

For males, Dr. Kutzler points out, “The signs of urethral blockage are difficulty urinating, excessive time in the litter box and persistent licking of the penis. You may notice abnormal discharge, and the animal may make it clear that it is in pain when you pick it up.”