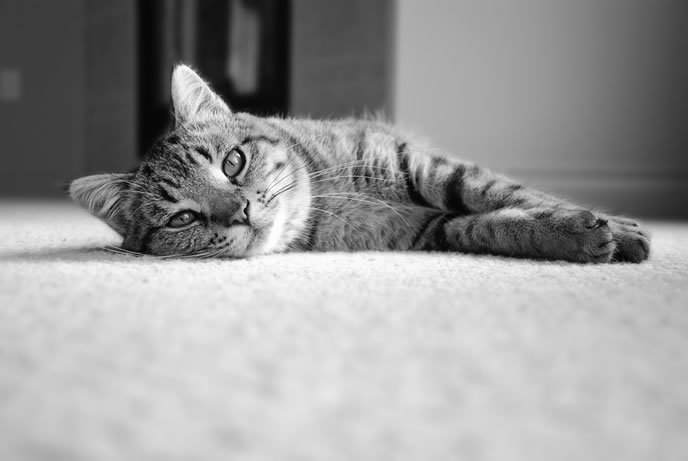 Cats suffer kidney disease more often than many other species, including dogs and humans. Almost all geriatric cats have some kidney damage. Because the kidneys produce a hormone that stimulates red blood cell production, when the kidneys fail, cats may experience anemia, which is low red-blood cell concentration in the blood. Anemia may limit the delivery of oxygen to vital tissues.

It can’t be dismissed merely as tired blood to be cured by magic elixirs. Anemia can be life threatening and may occur suddenly. At other times, it may be a clue to a chronic underlying problem like kidney disease. However, advances in veterinary medicine are providing hope.

A Blood Sample Clue. One breakthrough in the diagnosis of the cause of anemia is the polymerase chain reaction (PCR) test. This revolutionary technique, which can identify small pieces of DNA in a sample of blood, has been used in research applications since its discovery in the 1980s.

Now veterinarians use the technology to identify the DNA of potential infectious organisms such as Mycoplasma sp. or Babesia sp. that can cause anemia.

“Over the years our diagnostics have become more sophisticated,” says Meredith Miller, DVM, ACVIM, a lecturer in small animal medicine at Cornell University Hospital for Animals. “PCR testing is much more sensitive than looking for blood parasites via microscopy and more specific than using antibody titers — a measurement of antibodies in the blood.”

Anemia has a host of causes and can be classified as either regenerative or non-regenerative, based on the body’s response to it:

Regenerative: With this type of anemia, bone marrow produces new red blood cells, but often not quickly enough or in sufficient numbers to replace what is lost. “The two biggest causes of regenerative anemia are blood loss and hemolysis — where red cells are produced but prematurely destroyed,” says Catherine Cortright, DVM, ACVIM, veterinary internist and former resident at Cornell.

Non-regenerative: The more common variety — and the one with the most possible causes — is characterized by the body’s inability to produce new red blood cells, typically because of a problem with bone marrow.

The CBC can also determine whether the anemia is regenerative or non-regenerative. “We look under a microscope for the size and color of the cells and the number of immature red blood cells, called reticulocytes. Their presence is a sign that the bone marrow is sending out immature blood cells and trying to regenerate,” Dr. Cortright says.

Screening for evidence of internal bleeding or of an underlying infection comes next. If no other reason for a nonregenerative anemia is found, a bone marrow aspirate — a sample taken with a large needle — must be performed under sedation or anesthesia to see if a primary bone marrow disease like cancer is present.

Although regenerative anemia is less common, it often requires immediate diagnosis and treatment. The blood loss resulting from traumatic injury — if for example, a cat is in an accident and is bleeding profusely — is the easiest type to diagnose.

Treatment is relatively straightforward: Once the cat is stabilized, the bone marrow can resume producing red blood cells. Often a blood transfusion is the only way to achieve this stabilization. The principle is the same for internal bleeding, except that it’s more difficult to detect until a cat shows signs of severe anemia, such as shallow breathing, lethargy and pale gums.

“Keep in mind, however, that cats are especially good at hiding signs of illness, and sometimes the only indicator that something is wrong may be a decrease in social behavior or increased hiding,” Dr. Miller says.

Causes of regenerative anemia include:

– Mycoplasma hemofelis, parasitic bacteria that infects red blood cells. The bacteria is transmitted by fleas. Infected red blood cells are removed from circulation by the spleen or liver, leading to a severe and life-threatening anemia.

– The ingestion of toxins such as rat poison. This alters the ability of the blood to coagulate and may lead to life-threatening bleeding into the chest or abdomen.

– The consumption of food or household items such as raw onions, garlic, the pain medication acetaminophen, and zinc, the main component of pennies produced since 1982.

Sometimes a blood transfusion is the only way to help a cat who is bleeding or showing signs of severe anemia. But cats have naturally occurring antibodies to the common blood types other than their own and can have a fatal reaction if the wrong type blood is administered, Dr. Miller warns. Transfusing a cat without knowing the blood type of both the cat and donor beforehand is never advised.

The inability to produce red blood cells that characterizes non-regenerative anemia has myriad possible causes, including:

– Infections and inflammatory diseases, especially chronic kidney disease. Cats stand out as a species in this regard, says Brian Murphy, DVM, Ph.D., veterinary pathologist and Associate Professor at the UC Davis School of Veterinary Medicine. “We don’t understand why it is so common. It’s not true of dogs, humans, horses and primates, but most cats start acquiring renal injury at 10, 11 or 12 years of age, and a significant number of them eventually go on to develop renal failure.”

– Dr. Murphy and his team are working on gene therapy solutions. (See sidebar below.)

– Medications affecting bone marrow. Some antibiotics and pain medications, including aspirin and acetaminophen, may be associated with bone marrow suppression, as can estrogen-containing creams.

– Infectious diseases like the feline leukemia virus and parvovirus.

Often non-regenerative anemia is too mild to cause clinical signs. It is usually resolved by treating — if not curing — the underlying condition. Cats who become anemic over a period of time, as is the case with many non-regenerative anemias, fare better than those who have a sudden onset of anemia, because the body has had time to adjust to the decreased red blood cell count.

“With the continued advancements in veterinary medicine,” Dr. Miller says, “many cases of even severe anemia may be treated with an excellent long-term prognosis.”