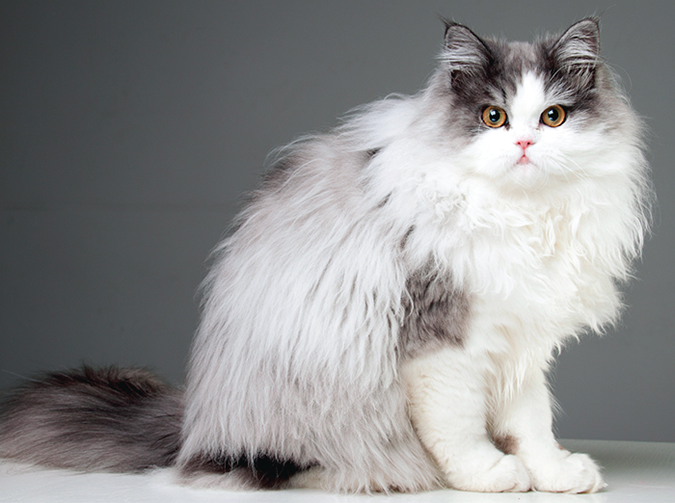 Not that long ago, a DNA analysis on anyone or anything was unthinkable. It wasn’t until 2003 that the human genome (genetic material) was fully sequenced. In 2007, the feline genome was partially sequenced in an Abyssinian cat named Cinnamon. This is important because sequencing helps us understand what an organism will look like and what disease conditions it might be prone to having. DNA analysis can be valuable to cat owners and breeders.

So far, we know of about 250 heritable genetic conditions in cats. These include diseases like hypertrophic cardiomyopathy, polycystic kidney disease of Persians, and progressive retinal atrophy of Siamese cats. Being able to study the way these diseases are passed on to offspring is a critical part of DNA analysis.

To understand this information, it’s important to know that there are limited DNA sequences to compare your cat against. Because there are fewer feline breeds and more money has been spent on dog DNA testing, our information on felines is currently limited. Luckily, there are several laboratories working on broadening the database. These include the 99 Lives Cat Genome Sequencing Initiative at the University of Minnesota, which is contributed to by researchers funded by the Cornell Feline Health Center at Cornell’s Veterinary Biobank (see sidebar on p. 6) and others. The project currently has 200 cat genomes sequenced, at the Cat Genome Project at the U.S. National Cancer Institute.

Furthermore, companies offering feline DNA testing are building their own databases against which to compare your cat’s sample. The more cats that undergo DNA sequencing, the more information we will have. In the chart on this page, we have collected three popular commercial tests and compared them.

Since Cinnamon’s genome was sequenced, feline DNA kits are becoming more available. While it may sound daunting to collect DNA from your cat, it is quite simple. The kits generally request either a hair sample or a swab of the cheek. Blood testing is likely the most accurate, and if you are interested, your veterinarian can collect this for you.

What Can DNA Testing Tell You?

Feline DNA testing can offer a wealth of information, including genetic control of coat color, coat length, and possible predisposition toward certain diseases. Unlike dog DNA testing, in which owners receive a percentage breakdown of breeds, cat DNA testing does not offer this yet.

The current DNA tests compare your cat’s DNA to the pedigreed breeds that have been sequenced to find the most similar match. This can tell you why your cat looks a certain way and may provide insight into behavioral traits and disease processes. For instance, Bengals are known to be very active, athletic cats, whereas Ragdolls are known for being cuddlers. Maine coon cats and Ragdolls have a heritable genetic heart condition called hypertrophic cardiomyopathy, and Persians are prone to genetically mediated polycystic kidney disease.

DNA tests can provide information regarding what diseases your cat may be a carrier for (if you are interested in breeding) or may have a heritable predisposition toward. When deciding to breed, knowing your cat’s carrier status for breed-linked diseases is critical. This way, when selecting a breeding partner, you can avoid propagating that gene in the kittens.

Feline genome sequencing is still in its infancy, but advancements and improvements are being made. Several institutes are working on building feline genetic databases.

If you’re considering a feline DNA test, ask yourself what you’re interested in learning and why. If you are concerned about a breed-specific disease, consult with your veterinarian about submitting blood to laboratories. If you are mostly interested in learning about your cat’s possible genetic disease predisposition, a feline DNA test kit is likely adequate.

We’re all familiar with the term DNA. But do you know what it is? DNA stands for deoxyribonucleic acid. It is the hereditary genetic code upon which life is built. Most DNA is found within chromosomes, which are contained in the nucleus of the cell, the director of all cellular activity. Cats possess 38 chromosomes (for comparison, humans have 46).

DNA is composed of the chemical bases adenine (A), guanine (G), thymine (T), and cystine (C) arranged in a double helix. These pair together—A with T, G with C—to form base pairs. The pairs are bound together by sugar and phosphate molecules, forming a “ladder.” These pairs and their organization determine how an organism is built and how it functions.

The feline genome has approximately 2.5 to 3 billion base pairs per cell, making up about 20,000 to 25,000 genes. Genes are short segments of DNA. Genome refers to the entire set of hereditary information within an organism.

Researchers at the College of Veterinary Medicine at Cornell University are developing a database of cat DNA to identify the genetic basis of a variety of common feline diseases, including inflammatory bowel disease, hypertrophic cardiomyopathy, chronic renal disease, and diabetes mellitus. By comparing DNA from healthy cats with DNA from cats with one or more common cat diseases, they hope to learn more about what roles genes may play in these conditions. This knowledge can improve diagnosis and treatment of a variety of feline diseases. If you would like to help with this study, a small blood sample will be needed from your cat (only cats ages 10 and older). There is no charge to participate. If you’re interested, you can fill out the DNA donation form at http://bit.ly/CornellCatDNA