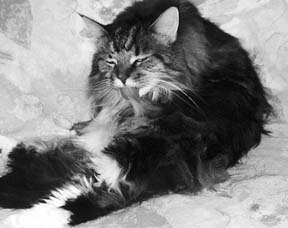 Your old Persian cat, Farah, is napping peacefully on your new Persian rug. Suddenly, she bolts up, wide awake and clearly uncomfortable. She crouches, extends her neck, and for a few seconds, retches, hacks and gags in distress. Then, to her relief (and your dismay), she spits up something scary looking – right on that valuable Persian rug.

What Farah has disgorged is a trichobezoar – a damp wad of undigested hair, moistened by bile and other digestive fluids – thats commonly referred to as a hairball. Despite that term, hairballs are rarely globular in shape. Rather, they are most often slender and cylindrical. According to Joanna Guglielmino, DVM, they are generally similar in appearance to a cigar or sausage, an elongated shape imparted by the narrow food tube (esophagus) through which a hairball passes on its adventurous journey from the cats stomach to the outside world.

At first glance, a hairball can be confused with feces, says Dr. Guglielmino, an associate veterinarian at The Cat Doctor, a Seattle-area clinic specializing in feline health. But if youre courageous enough to examine it closely, youll discover that its odor is not really foul, only mildly fetid, and its apt to be the same color as your cats fur.

Regurgitated hairballs are variable in size. They are usually about an inch long, she says, but Ive seen some that are five inches long and an inch thick.

How Hairballs Develop
Hairballs are the unsavory byproduct of a good, clean habit. As your cat grooms herself, she swallows a lot of the dead hair that has come loose. This is because tiny backward-slanted projections (papillae) on the surface of her rough tongue propel the indigestible hair down her throat and into her stomach. While most of this hair eventually passes through the animals digestive tract and is excreted intact in the feces, some of it remains in the stomach and gradually accumulates into a wet clump – the hairball.

According to Dr. Guglielmino, kittens and young cats are less apt to develop hairballs than older cats that, as well-experienced groomers, are likely to spend a good portion of their waking hours busily licking their coats. Some cats are, by nature, more fastidious than others in their grooming habits. Long-haired breeds – such as Persians and Maine Coons – are at significantly greater risk than short-haired breeds. And the development of hairballs is more frequent in seasons of the year when cats shed their coats.

Appropriate Concern
Its not uncommon, says Dr. Guglielmino, for a cat to upchuck a hairball once every week or two, and thats nothing to worry about. However, if your cat is lethargic and refuses to eat for more than a day or so, or has had repeated episodes of unproductive retching, you should consult your veterinarian without delay.

Its possible that a hairball, instead of being regurgitated, has passed from her stomach into her intestine and is creating a potentially life-threatening blockage somewhere within the digestive tract. Or its possible that the frequent hacking has nothing at all to do with hairballs. It may instead be a sign that the animal is suffering from a serious respiratory ailment, such as asthma, in which case emergency treatment would be necessary.

Diagnosis of intestinal blockage, says Dr. Guglielmino, is based on physical examination, bloodwork, radiography and a history of the animals pattern of hairball regurgitation. If a blockage is detected, surgery may be the only way to remove the hairball. More often, therapy will center on protecting the intestine through several days of clinical care that includes intravenous rehydration and the use of a laxative to move the hairball through the digestive tract. This extended supportive care, she notes, can cost between $300 and $400.

Reducing the Risk
To minimize and possibly prevent the development of hairballs and their complications, Dr. Guglielmino recommends the following:

Get your cat accustomed to a daily brushing and combing.

If the animal wont allow it, take her to the veterinarian or a reputable groomer for a haircut once or twice a year. This is especially effective in long-haired breeds.

Feed her a hairball remedy – usually a mild petroleum-based laxative – once or twice a week.

In addition, she advises, keep the floors of your home free of thread, paper clips, twist-wraps, and other materials that, if ingested, can become dangerous hairball ingredients.