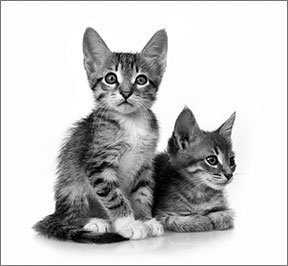 It may come as a surprise to learn that nearly one-third of cats experience signs of an active infection of flu-like feline calicivirus (FCV). Most of us would think that vaccinations prevent the disease in cats, and we’d be mistaken.

The bigger question for virologists, however, is whether some cats are naturally resistant to the disease. The answer might offer the hope of finding a way to prevent infection by this baffling virus.

Virulent Strains. FCV usually causes a minor case of feline sniffles, but in rare instances, especially in crowded catteries and shelters, the disease can evolve into virulent strains that spark deadly outbreaks. FCV accounts for nearly half of infectious feline upper respiratory tract diseases, and most cats are exposed to the virus at some point, usually as kittens.

John Parker, BVMS, Ph.D., Associate Professor of virology at Cornell University College of Veterinary Medicine’s Baker Institute for Animal Health, is one of a handful of specialists in the country studying FCV. He has received a $22,500 one-year grant from Winn Feline Foundation to research susceptibility and resistance to the virus.

“The ultimate goal would be to find ways to completely prevent it. But at the moment, we’re working on identifying cats who might have an in-built resistance,” Dr. Parker says. “If there were cats out there who were resistant, it’d be important to know. For example, if you’re a cat breeder and your cats by chance are resistant to FCV, it may make a difference in the cats you want to breed.”

The idea that certain cats might be resistant traces back to research conducted elsewhere. British Blue shorthair cats in that study didn’t develop the disease, despite exposure. But the finding is highly speculative, as it wasn’t the point of the study. “Just to be perfectly clear — we don’t yet know that there are cats out there who are completely resistant to FCV,” Dr. Parker says.

DNA Collection. He and colleagues are collecting DNA from cats’ blood samples at the Cornell University Hospital for Animals — leftover samples from unrelated tests that owners gave permission to use. They hope to analyze 150 samples in a year. Based on initial observations, they expect to find genetic differences in the cell surface protein where the calicivirus attaches. It’s called feline junctional adhesion molecule A, or fJAM-A for short.

If it turns out that gene variations will predict whether a cat is susceptible or resistant to the disease, Dr. Parker hopes that someday a genetic test could be developed to identify resistant cats.

Dr. Parker, who had worked as a private practice veterinarian, became interested in the virus when reports of virulent systemic FCV emerged. “As a virologist, I was interested in how a normally mild virus disease could become so virulent. So I decided to start working on the virus as a new faculty member at Cornell.”

The puzzle at the time was: Why are some forms so extremely virulent? Research led to clues, one being that the more severe strains grow faster in the lab. “There is a correlation between rapid growth of viruses in tissue culture and virulence in cats. We looked for a genetic signature that would be indicative of virulence, but because of the high background variation in genome sequence of FCV strains and the small number of highly virulent isolates we had to examine, we couldn’t distinguish a genetic pattern that could tell us if the virus was virulent or not. Individual FCV strains differ by about 20 percent in their genome sequence. These viruses have a high rate of mutation.”

Daunting Problem. Taking the big-picture view, Dr. Parker says the virus typically isn’t so much of a problem for an individual cat who becomes infected. It’s a daunting problem for the feline world at large. That’s because the virus can persist and mutate very quickly. Sometimes it will make a change that leads to a more dangerous virus.
About those vaccinations for FCV: They don’t provide total protection from infection in all cats. The vaccine reduces its severity, should a cat develop the full-blown disease. “It’s not that the vaccine is useless,” Dr. Parker says. “It’s just that it’s not completely protecting against infection.”

There are various ever-evolving strains of calicivirus, which can mutate even within an infected cat. Some cats carry the virus but never become sick or show any outward symptoms at all, and vaccination makes them less likely to spread infection.

“The message I would probably give to owners is don’t panic. FCV is not ebola virus,” Dr. Parker says. Owners have relatively little to worry about, especially when, in most cases, the virus causes no more serious effects than a simple cold.

THE SIGNS FROM MILD TO SEVERE

Symptoms are generally mild in most cases of feline calicivirus infection:

The cat may have a stuffy nose.
His appetite may be a little off.
He may have a slight fever.
He may sneeze.
His eyes may water.

In more serious cases, however, especially in kittens:
The cat may have difficulty breathing.
Ulcers can erupt in the nose or mouth, prompting drooling.
Some strains of the virus can lead to painful joints and limping.
The cat may be depressed and lethargic.

If your cat should contract the disease, treatment is basic nursing care. Clean the eyes and nose with a moistened tissue to remove debris. Separate your pet from other cats, and keep him comfortable. His water and food bowls should be clean and available only for him, not shared. If he has an ulcer on his tongue and is not eating normally, make food tempting. Place sardines in a food processor to liquidize and mix with regular food warmed to 86 degrees Fahrenheit.

“Cats use their nose to detect smell and they like strong-smelling foods. If they can’t smell, they can’t eat,” says Dr. Parker. “Like the common cold, there’s nothing that’s really going to help [cure it]. But it’s usually going to get better.”

Symptoms usually clear up quickly on their own. Veterinarians prescribe antibiotics only for very ill cats. Diagnosis includes dabbing a cotton swab in the ear, eye or mouth to collect discharge for testing.