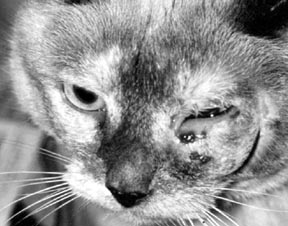 Your feisty but lovable old cat Scrapper is out of sorts. For the past few days, hes been lolling about the house, uncharacteristically lethargic, off his food, and seemingly depressed. While stroking his back to comfort him, you notice a small but distinct lump just to the side of his tail. You touch it gently – but Scrapper nevertheless lets out a howl, followed by a hiss. Obviously, the lump is very painful to him. Its likely that youve discovered an abscess – a clear sign that Scrapper is harboring an infection (and also a foul mood).

Usually From Bites
An abscess is a localized collection of pus, the sticky, smelly, yellowish fluid that forms at the site of an infection. Although pus usually contains a certain amount of cellular debris and dead tissue, it is composed mainly of white blood cells, which have been summoned to combat invading bacteria and other microorganisms.

In cats, abscess-producing infections usually result from bites, since the bacteria that cause infection are normal inhabitants of the feline mouth and are easily passed along when one cats sharp teeth puncture another cats tender flesh.

Due to what James Flanders, DVM, refers to as the bacteria-rich oral flora normally residing within the feline mouth, a high percentage of cat bites will result in infection, and consequently, develop into abscesses.

Unneutered Males at Risk
Dr. Flanders, an associate professor of surgery at Cornell University College of Veterinary Medicine, says that the most likely victims, by far, are unneutered males. Intact females and neutered animals of either sex may also get into occasional fights, he points out. But unneutered males are far more aggressively territorial and are more inclined to brawl with a would-be interloper.

If an abscess is to develop, it will usually do so about three days after a cat has been bitten. According to Dr. Flanders, it takes that long for the microorganisms that entered the cats body to proliferate, and for the animals white blood cells to respond in great numbers.

The abscess will appear as a dome-shaped mass on the skin surface, typically a half-inch to an inch in diameter and either firm or slightly mushy to the touch. The abscess is a sign that the body is attempting to get rid of the microorganism, says Dr. Flanders. Thats where the pus comes from.

Although they may appear anywhere on an animals body, abscesses are most frequently located on the limbs, face, base of the tail, and back.

A Veterinary Visit
In general, Dr. Flanders urges that an abscess of any size should be treated by a veterinarian. He recalls cases in which owners have put off seeking veterinary care until abscesses have grown to four or five inches in diameter. By this time, a cats white blood cells are, without a doubt, losing the battle against the invading bacteria. Thats when the infection can spread systemically and overwhelm the cat – with potentially lethal consequences.

A visit to the veterinarian will ensure that the injured cat receives a thorough presurgical workup, an expertly executed lancing, draining and cleansing of the abscess and underlying tissue, and appropriate postsurgical treatment with systemic antibiotics – usually, says Dr. Flanders, a broad-spectrum penicillin-type drug.

Lancing an abscess will usually take from 15 minutes to a half-hour, says Dr. Flanders. To have a small abscess lanced, a cat may not need to be fully anesthetized – sedation and local anesthesia often will suffice. For larger abscesses, the cat will have to be totally anesthetized for the duration of the procedure.

Cost of Treatment Varies
The cost of treating an abscess varies widely depending on such factors as the type of veterinary practice at which the procedure takes place, its locale (rural versus urban), the site of the abscess, and the cats overall age and physical condition.

If the cat is older, very sick, or seriously debilitated, we might have to keep it for intravenous fluids and special antibiotics, says Dr. Flanders. Or we might have to install a drain in the wound to make sure that any hidden remaining pus continues to flow out of it.

Usually, he notes, the surgical procedure will completely drain the abscess. The good news for Scrapper and other such afflicted cats is that recovery from surgery is usually speedy and without complications. If the surgery has been a rigorous ordeal, recovery might take a few days, says Dr. Flanders. With the proper antibiotics, though, I would say that most cats bounce back 80 percent in one day and feel great within a few days.