Question: Buddy, my 15-year-old neutered male cat, has been treated for a skin condition (miliary dermatitis) for many years. He often gets little scabs and bumps on his skin, but last week a much larger-than-usual lump formed under his left jaw. Buddy has been miserable (reluctant to eat, etc.). We have been treating the sore with an antibiotic ointment, and now scabs are forming and ointment seems to be soothing. Why does this recur?

Answer: The development of multiple small scabs and bumps is fairly common in many types of feline skin diseases. The term miliary dermatitis is just a description of the way the skin is responding to some underlying skin disorder. Miliary dermatitis is one of the more frequently seen dermatological conditions in cats, and there are more than 20 different potential causes (for example, allergy, infection, or parasitic infestation) of this kind of scabby, bumpy skin disease.

Diagnose the cause
First, the veterinarian must diagnose the cause, which is sometimes difficult to accomplish, and then treat the underlying disease accordingly. Not being able to see the swelling on Buddy’s lower jaw places me at a distinct disadvantage, but I’m suspicious that what is happening may not result from miliary dermatitis. The apparent discomfort he has experienced would not be expected, nor should there be a large swelling, since the skin bumps associated with miliary dermatitis are quite small and not particularly painful.

I think it would be prudent to take Buddy to your veterinarian for a careful examination of the area. An abscessed tooth is one potential cause of the swelling. When such infection is severe enough, pus may drain from an open wound in the jaw near the infected tooth’s root, perhaps mimicking the type of sore you are seeing. If this is the case, proper treatment should resolve the pain and swelling within a short time.

However, it is possible that another, far more serious condition could be responsible. Cancer of the mouth or skin is not particularly rare in older cats, and any unexplained swelling should be examined as quickly as possible.

Question: I am hoping that you will settle a disagreement between my friends and me concerning calico cats, tortoiseshell cats, and cats of three colors. My friend says that these cats, especially torties, are always female. I say that one should be careful when using a universal quantifier like “always” since there are exceptions to most rules. I’d wager that a percentage, albeit small, of these cats are male. Who is right?

Answer: You win! Tricolored cats can be male, although the incidence is rare – odds are about one in 3,000. As a clarification, tortoiseshell cats (torties) have a black coat color with patches of red or orange. A calico cat is a tortoiseshell with patches of white. Torties and calicos can have a dilute coat pattern in which the black is replaced by gray and the red is replaced by a cream color. For simplicity’s sake, these cats are all classified as tricolors.

Tricolored cats are supposed to be female. For a cat to have both black and red coat colors, it must have two X sex chromosomes as the X chromosome carries the black or red gene. As you may know, in mammals normal females carry two 2 Xs (XX) while normal males are XY. Normal males don’t have the ability to express both black and red colors because they don’t have two X chromosomes. One of the more common genetic abnormalities that can produce a male cat with a tortoise shell coat color pattern is called Klinefelter’s syndrome (a syndrome that also affects some humans). Affected male cats have an extra X chromosome, so they can be tortoiseshell, but they are sterile. However, other, less common, genetic anomalies allow male cats to be tricolored but fertile. So, contrary to popular belief, some male tricolored cats are not sterile. 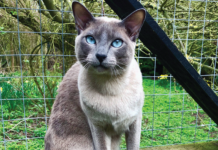