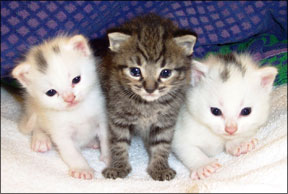 Honestly, veterinary researchers werent trying to make liars out of cat owners when they published “Urinary biomarkers to assess exposure of cats to environmental tobacco smoke” in the

They were trying to advance the science of gas-chromatography analysis to search for toxins that might cause disease in pets. Out of 61 healthy cats in the urinalysis study, 19 came from households where the owners said cigarettes were smoked. And 42 came from homes where owners swore no one ever smoked.

In a victory for gas chromatography, the urine of all 19 cats showed evidence of

the chemical, 4-(methylnitrosamino)-1-3-pyridyl)-1-butanol, and other tobacco-related gunk. But so did the urine of three cats from supposedly smoke-free homes. The researchers said something about “guilt and embarrassment” but were not so polite: Second-hand smoke is bad for every animals health! If you kids cant take it outside, well test the cats urine again.

If you were waiting for a sale to buy a pricey Allerca GD kitten (touted as “the worlds first scientifically proven hypoallergenic cat”) you waited too long. According to the companys website www.allerca.com, the price just jumped – from $3,950 per sneeze-free pet to $6,950 – “as a result of an increase in the cost of liability insurance.”

The Mystery of Nasal Discharge

On the other paw, sometimes cats are the ones with runny noses. A study reported in the

A few of the affected cats had “foreign bodies” up their noses for several months before they finally got to see a vet. Others had polyps or tooth root abscesses. But the bottom line from veterinary researchers at the University of Missouri is this: Despite advanced diagnostic testing, imaging studies and biopsy, “the cause of chronic nasal discharge in cats often remains elusive.”

When Cats Were “Retrievers”

Youve heard the sad news about the director of the Cornell Feline Health Center and author of the “Ask Dr. Richards” column in this newsletter. Maybe you know the ironic way that James R. Richards, DVM (1948-2007) died – swerving his motorcycle to miss a barn cat in the road.

But did you know how Dr. Richards developed a lifelong fondness for the critters he invariably called “kitty cats”? According to his mother, who survives him, “Jim Bob” Richards grew up on a farm in Preble County, Ohio, an area once so rural that there were no children his age nearby. The farms barn cats were his first – and until he reached school age – only friends.

He even trained one to perch on his shoulder while he hunted agricultural-pest birds for the bounty that helped buy school clothes. Each time keen marksmanship felled a bird, the “retriever cat” dashed into the grain field and dutifully brought it back.

Dr. Richards was a great teacher, communicator and interpreter of “felinese.” At Cornell, where some of us knew the original, he was “the Carl Sagan of Cats.” Billions and billions of them. He was doing two of the things that mattered most – riding on twisty country roads, and trying to save the life of a cat.