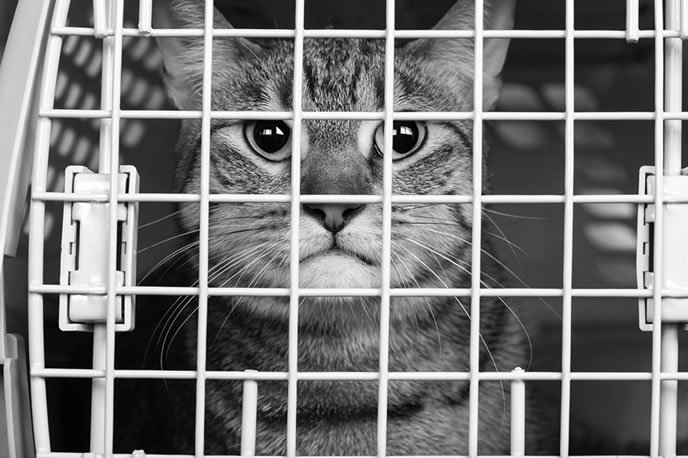 When you adopt a kitten or a cat, the traditional plan calls for spaying or neutering as soon as possible. This common procedure is usually effective in rendering your cat sterile but does carry health risks and requires time to prep, operate and provide post-surgical care.

In the U.S., animal shelters euthanize an estimated 2.7 million cats and dogs annually because there aren’t enough homes for them. That’s why a concerted effort is underway among veterinarians, animal shelters and rescue groups to find alternatives to surgical sterilization that are quicker, less costly and invasive and, most of all, safe.

Limited Success. “Pet overpopulation remains a major problem in this country,” says S.H. Cheong, DVM, Ph.D., a specialist in theriogenology (reproduction) at Cornell University College of Veterinary Medicine. “There’s been good success in reducing the sale of pets at pet stores, but more education is needed to make the public aware of the need to have their pets spayed or neutered so that they don’t contribute to this pet overpopulation problem.”

The Gary Michelson Found Animal Foundation, a privately funded organization, announced that it will award a $25 million prize to any person or group that develops a single drug treatment to safely and permanently sterilize male and female cats and dogs without surgery.

“We at Cornell are well aware of this prize, and it has certainly generated a lot of discussion here,” Dr. Cheong says. “This is a complicated challenge: to create a one-time non-surgical sterilization for both males and females.”

One challenge is efficacy. “Species will become extinct if the reproductive system fails to survive many challenges over tens of thousands of years. Therefore, there are redundancies — back-ups — to most physiologic pathways to recover from single exposures to challenges to reproduction. Most methods fail to consistently cause permanent sterility in males and females,” Dr. Cheong says, adding that even in humans, birth control methods are not single treatments except for surgery.

“The winning product must be permanently effective on both males and females at any reproductive age, from prepubertal to sexually mature, and there are not that many physiological pathways common to all these groups that can be targeted.”

What’s more, the one-time product must also be easy, safe, cheap, able to survive field deployment without special cooling/freezing conditions and prove a viable path toward approval by the Food and Drug Administration. Dr. Cheong says.

The Michelson foundation has already awarded Harvard University Professor David Mooney, Ph.D., a $700,000 grant to develop a vaccine to sterilize animals by disrupting a hormone responsible for reproduction. Meanwhile, research on alternatives to surgical sterilization continues. These include tubal ligation for female cats, vasectomies and sterilant injections for male cats, and immunocontraceptives. Many are promising options but far from perfect:

This surgical procedure involves blocking (with or without cutting) the fallopian tubes to prevent sperm from reaching the egg for fertilization. Unlike traditional spaying, the uterus and ovaries are not removed.

Advantages: It allows normal hormone production while preventing unwanted pregnancies. It’s less invasive than traditional ovariohysterectomy in which the two ovaries and most of the uterus are removed.

Concerns: An increased risk of pyometra, an infection of the uterus.

Through an incision made in the scrotum, a veterinarian cuts, ties and blocks off the vas deferens tubes, preventing sperm from entering the seminal stream during ejaculation.

Advantages: The procedure is potentially quicker and usually results in a faster recovery than castration because the testicles are not removed. The male cat is sterile, unable to impregnate a female in heat but retains secondary male characteristics.

Concerns: Without removal of the testicles, which produce testosterone, the male cat will continue to display hormone-related behaviors such as roaming, urine marking, humping and aggression. In addition, vasectomies are not generally taught in veterinary schools.

“The biggest advantage of castration versus a vasectomy is the reduction of intact male behavior,” says Dr. Cheong, adding that some owners may prefer the secondary male characteristics that remain such as larger heads, higher muscle mass and retention of the testicles. “This is not a very common procedure in veterinary medicine. I would be surprised if this option takes off in terms of popularity in dogs and cats.”

A chemical compound of zinc gluconate neutralized with arginine, an amino acid, is injected into a male cat’s testicles to make him sterile. His testicles atrophy and shrink in size, but are still visible. The drug has been used abroad but hasn’t been approved for use in cats in the U.S.

Advantages: The procedure doesn’t involve anesthesia and surgery and can be done in less than a minute.

Concerns: Neutersol, the original drug for dogs, was withdrawn from the market two years ago because of adverse reactions, such as inflamed testicles, in some dogs.

Ark Sciences purchased the intellectual rights to the drug, and its new version, Zeuterin, received Food and Drug Administration approval in 2012. Veterinarians must complete a five-hour training program to be certified to use the drug, says Sandeep Manchanda, Ark Sciences’ chief operating officer. “Swelling is an expected outcome, but it is not painful in most cases,” he says, explaining that 6.3 percent of dogs in their study experienced pain, and scrotal ulceration was the most serious adverse event occurring in 0.4 percent of the dogs.

“We have developed protocols to successfully treat these cases,” Manchanda says. “We do not have a timeline for cat approval but expect to submit a research study for possible publication soon.”

To date, about 600 veterinarians have been trained and are using Zeuterin on male dogs at an average cost to owners of about $250, he says.

Bryon Maas, DVM, Ark Sciences’ medical director, sees compelling reasons from a veterinary standpoint to consider Zeuterin. “This non-surgical option allows us to preserve some of the testosterone in male dogs and keep their endocrine systems.”

At Cornell, Dr. Cheong believes Zeuterin is a viable option if previous concerns, such as swelling, are addressed with the newer version.

This contraceptive vaccine specifically targets gonadotropin-releasing hormones, which are important for reproduction.

Advantages: No surgery is required. The vaccine is used on horses, dogs and cats in Canada and Australia. It may also activate the cat’s immune system to fight infectious diseases and cancers.

Concerns: The FDA hasn’t approved the vaccine for use on cats in the U.S. Duration of reproductive suppression is variable and may result in unwanted pregnancies. Booster vaccines would be required every two years or so to be reasonably confident that the cat remains infertile.

Speaking about Dr. Mooney’s potential product for the Michelson prize, Dr. Cheong says, “The ease of use would maximize veterinary labor at shelters. An implant could potentially be designed to also include vaccines for rabies and other diseases, reducing the number of injections for pets.”

The hope is that a non-surgical option could someday be widely and safely used to help reduce pet overpopulation,

Dr. Cheong says. “There are far too many homeless animals and far too many animals having to be euthanized in shelters.” ❖