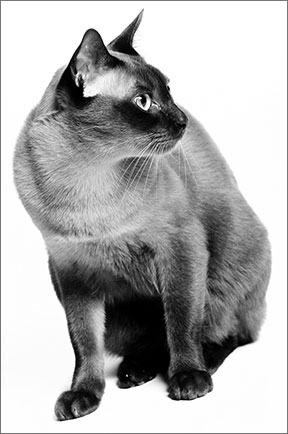 If you have a short-nosed cat who has put on some pounds and suffers breathing problems due to a condition called brachycephalic airway syndrome, one simple change could go a long way in easing his discomfort: help him slim down.

Flat-faced breeds are vulnerable to respiratory difficulties such as labored breathing and snoring as they struggle to inhale, says James A. Flanders, DVM, ACVS, Associate Professor of small animal surgery at Cornell University College of Veterinary Medicine. “Obesity worsens the symptoms of brachycephalic airway syndrome (BAS). Of all the things an owner of a brachycephalic cat can do, weight management is the best way to avoid problems.”

Excessive Exertion. In fact, weight loss can sometimes control the condition in cats with only mild or intermittent symptoms without the need for surgery. Likewise, avoiding situations that induce heavy breathing — such as stress, excessive physical exertion and hot or humid conditions — can be beneficial.

For most cats with BAS, however, surgery is the recommended treatment to correct structural abnormalities in their faces or throats. “When cats demonstrate clinical signs of brachycephalic airway syndrome, it is almost always related to their nostrils and occasionally their soft palates,” Dr. Flanders says. “Typically, surgical treatment can do wonders for these pets, and they do quite well afterward.”

Himalayans, Burmese, Persians and Exotic Shorthairs — a shorthaired version of Persians — are among brachycephalic breeds, but not all will necessarily suffer from the syndrome, also known as congenital obstructive upper airway disease. Owners’ understanding of the underlying causes and symptoms can help in both prevention and timely treatment.

Although some people find the flattened faces of brachycephalic cats endearing, discretion should be used when breeding them. Those who require surgery to correct their breathing problems should not be used for breeding. Some veterinarians recommend spaying or neutering them at the time of the surgical correction of the brachycephalic abnormality.

The compressed facial structures of brachycephalic breeds lead to increased resistance in their airways. The more severe or numerous abnormalities a cat has, the more severe the symptoms are likely to be. They can include:

If not corrected, brachycephalic airway syndrome can eventually lead to secondary problems, such as airway inflammation and strain on the heart. Most cats are diagnosed as young adults, often by 3 years of age. The structural abnormalities in a cat’s face and head can include:

Stenotic nares
These severely narrowed nostrils are the most common defect in brachycephalic cats. The narrowed openings restrict the amount of air that can enter through the nose. Stenotic nares can be corrected surgically by removing a piece of tissue from the nostrils to allow better airflow.

Everted laryngeal saccules
This often occurs in addition to another abnormality. The added effort that cats with BAS must devote to breathing can cause these small pouches inside the larynx to turn outward or be sucked into the airway. The everted laryngeal saccules then further obstruct air flow. Treatment entails surgical removal of the saccules.

Anti-inflammatory medications and oxygen therapy are often used for short-term relief of airway inflammation and breathing difficulties. However, surgery is eventually required to correct the underlying anatomical abnormalities. The cost varies from $500 to $3,000, depending on the hospital and extent of problems. “Some cases require only relatively minor outpatient procedures, but others are more severe,” Dr. Flanders says.
The earlier problems are detected and treated, the better the prognosis. Cats with only one defect, such as stenotic nares, tend to fare better than those with multiple problems.

As with any surgical procedure, patients need to be monitored closely afterward. Because surgery results in swelling, airways can be even further narrowed during recovery, so the cat’s breathing and heart rate will be closely monitored, along with other key health indicators.

Intervention Efforts. In some cases, intervention might be required to ensure that a cat receives adequate oxygen during recovery. Such interventions can include a nasotracheal catheter in which a tube is passed into the trachea via the nasal passage or, in more serious cases, a tracheostomy, which is an incision in the windpipe.

Veterinarians administer medication to control pain for several days after surgery. Antibiotics are usually prescribed only if there is an ongoing infection such as pneumonia. A follow-up exam will be scheduled two weeks after surgery to evaluate healing. Meanwhile, the veterinarian might recommend restricting your cat’s exercise or activity.

A successful surgery will result in better breathing, higher energy levels and improved sleep. However, complications can occur. In some cats, surgery to open the nostrils can cause collateral damage to surrounding tissue and result in the collapse or permanent narrowing of the nostrils. Surgery to shorten a cat’s soft palate can result in a soft palate that is too short. In these cases, the cat might suffer from reflux of food into the nasal cavity, which can cause chronic nasal infection. However, such complications are relatively rare, and working with an experienced veterinary surgeon can help ensure the best possible prognosis.

In the past 10 to 20 years, surgical options for the procedures used to correct brachycephalic abnormalities have greatly improved outcomes, Dr. Flanders says. For example, many veterinarians now use lasers, rather than traditional scalpels, to trim nasal passages and the soft palate. This results in less swelling and bleeding, and reduces recovery time.

Younger cats diagnosed with brachycephalic airway syndrome tend to have a better prognosis than older cats, as the risks associated with undergoing surgery increase with age. Timely surgical correction can be tremendously effective, however, with many cats seeing improved quality of life for many years. ❖

SOME AIRWAY PROBLEMS HAVE A DIFFERENT BASIS

In some cases, upon inspection, suspected cases of brachycephalic airway syndrome turn out to be related to other issues, such as upper respiratory system infections, foreign objects obstructing the airway or allergic reactions that cause the airway to swell.

Brachycephalic airway syndrome is diagnosed based on a cat’s breed, facial shape, clinical signs and the results of a physical examination. Stenotic nares, or narrowed nostrils, are often diagnosed on visual inspection alone.
However, abnormalities that occur within or beyond the mouth, such as an elongated soft palate, hypoplastic trachea or everted laryngeal saccules, can require heavy sedation or full anesthesia to perform the tests required to diagnose them. These tests include laryngoscopy and tracheoscopy, in which a small fiber-optic scope is inserted through the mouth to examine the larynx and trachea.

Veterinarians typically grade brachycephalic syndrome on a four- or five-point scale, with zero meaning the cat exhibits no symptoms and four to five meaning the cat has such difficulty breathing that the condition is potentially life threatening.

Cats with brachycephalic airway syndrome understandably have an increased risk in undergoing general anesthesia. Blood work and chest X-rays might be recommended before the procedure to evaluate general health. If a cat must undergo general anesthesia for diagnosis, the veterinarian will likely recommend that surgical correction be performed at the same time.