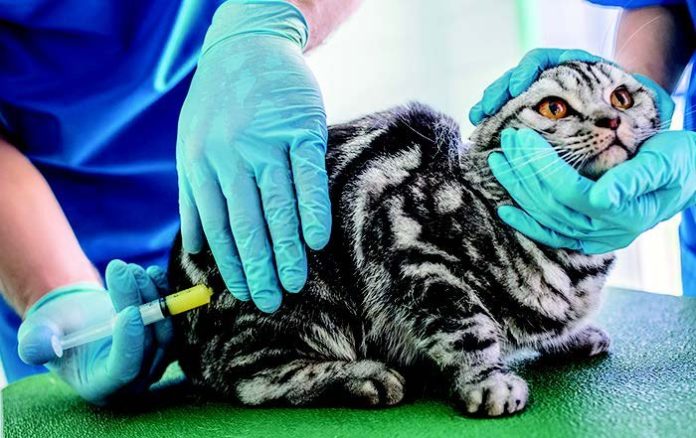 The specter of feline vaccine-associated sarcomas—malignant growths that can appear at the injection site of some vaccines—lurks in the back of the mind of every cat owner. Although veterinarians have guidelines for tracking vaccine-related sarcomas, you still may wonder if it’s wiser to skip vaccine boosters and rely instead on titers, which are blood tests that can tell you how much immunity to a specific disease remains in your cat.

Once the initial vaccination series to stimulate immunity has been given to your cat, titers can minimize how many shots your cat needs to get every year. Measurement of titers can be useful for some cats, but titer use in predicting protection from infection may be limited—and titers are not a money-saving option. By and large, titers will cost you more than a vaccination.

Titers are not vaccines, and they aren’t a panacea for keeping your cat safe from deadly diseases.

A titer is one measure of immunity. It is a snapshot of how well a particular part of a cat’s immune system is working to protect that cat from infection at the moment the blood is drawn for the test. It’s important to realize, though, that there are other mechanisms that a cat’s immune system uses to provide protection against pathogens (referred to as cell-mediated immunity).

A titer measures the concentration of antibodies your cat has produced against a disease pathogen. Antibodies, which can neutralize invading pathogens, are produced by lymphocytes in your cat’s blood. Each titer is specific for one disease/pathogen.

To determine your cat’s titer against an illness, a blood sample is drawn and sent to a laboratory. Once the blood arrives at the lab, it will be divided into samples that are then used to test for different diseases. Each separate sample will be sequentially diluted and mixed with a different antigen to see if there is a reaction (this reaction indicates that antibodies are binding to the antigen, which is generally a protein that is part of the disease pathogen). The more a dilute sample continues to show a reaction, the stronger the immune response (i.e. greater concentration of antibodies). For example, a sample with a titer of 1:300 suggests that the sample has a lower concentration of antibody than a sample with a titer of 1:1600.

To get a quantitative titer (such as 1:1600), titers need to be sent to laboratories that can do the serial dilutions. Some in-office kits offer “semi quantitative” titer results or simply indicate likely protection or lack thereof. The usefulness of these in-office tests has been the subject of debate.

A positive antibody titer means that your cat’s immune system is producing antibodies to a pathogen, and if enough antibody is produced, this may provide protection from infection. This could be due to either natural exposure to the pathogen or to vaccination.

A negative result generally means one of two things:

2) Your cat produced antibodies to that pathogen in the past but, over time, their concentration has diminished.

Titers for an individual cat may support recommended booster schedules of once every three years or they may show that protective immunity runs out after just two years.

The American Veterinary Medical Association (AVMA) cautions pet owners against counting on titers as proof that their pets are protected, unless there is research showing a direct correlation between an antibody titer level and immunity against disease exposure.

According to the AVMA principles: “For most common vaccine antigens, the correlation between serological (blood) response to vaccination, long-term serostatus, and protection in the host animal has not been adequately established. The lack of these data often precludes practitioner’s ability to make well-informed vaccination decisions based on serostatus alone.”

The Kansas State Veterinary Diagnostic Laboratory explains when titers should or should be used quite clearly: “In order to be useful, two criteria need to be met: 1) One needs to be able to detect a measurable immunity to a disease in a blood sample, and 2) There needs to have been challenge studies performed to associate protection with that specific titer level. A challenge study shows that animals which have a specified antibody titer did not get sick when exposed to the disease for which the titer was checked.”

Some cats probably should not get booster vaccines, including cats who have had bad reactions, cats with cancer or undergoing treatment for cancer, and cats with immune-mediated illnesses.

In addition, it’s wise to look at your cat’s lifestyle and determine what vaccines make sense for her. All cats should be current on rabies. The Kansas State lab, which is renowned for rabies testing, points out: “Rabies is zoonotic (can be transmitted to people) and control in rabies vectors (animals that can carry the virus and infect others) is the most efficient method in prevention of human rabies . . . laws currently do not include the use of titers in place of vaccination. The other complicating factor is that there is no agreed standard titer value that is considered protective.” So even if your cat has a rabies titer done, if she bites someone and is not current on her vaccinations, she will be quarantined.

The American Association of Feline Practitioners (AAFP) Advisory Panel is not comfortable with accepting titers as proof of immunity: “Because antibody titers may not reliably correlate with, or predict, the degree of protection or susceptibility for an individual cat, the Advisory Panel recommends employing defined revaccination intervals rather than measuring antibody titers to assure protection.”

That said, titers can be useful in some situations. If your kitten has received her initial series of vaccinations, a titer done two or more weeks later can indicate if her immune system responded appropriately to the vaccine. A titer also can be used to determine whether a stray cat has produced antibodies to a particular pathogen, but in reality, drawing blood is more expensive and logistically more difficult than preemptively vaccinating all cats encountered in shelter and trap-neuter-release programs.

Several factors affect a vaccine’s effectiveness and induced duration of antibody production. The first to consider is the type of vaccine. There are three basic types of vaccines:

Attenuated or modified live: Modified live vaccines are composed of modified versions of the actual pathogens and mimic a natural infection with that pathogen. These usually stimulate strong immunity. They should not, however, be used in cats with any health or immune problems or in pregnant queens, as there is potential to induce the disease itself in these cases. These vaccines must be properly handled and stored carefully to assure safety and efficacy.

Killed: Killed vaccines are noninfectious and cannot cause disease. They are generally considered safer and more stable than attenuated vaccines, but the immunity duration induced by these vaccines may be less than that of a live vaccine. Rabies is a killed vaccine.

Recombinant: Similar to killed vaccines in that they are noninfectious, recombinant vaccines are produced using DNA technology to induce bacteria to produce proteins that are subsequently administered to induce an immune response. Some feline leukemia vaccines are recombinant.

Vaccine efficacy can vary with the pathogen, any immune adjuvants (these are compounds that enhance the immune response induced) that have been added, and the method of administration.

The pathogens themselves also may influence immunity. A pathogen (i.e. virus) may develop an increased virulence (severity) and may undergo mutations that circumvent the immune response induced by a vaccine.

Many factors influence when and with which vaccines a cat should be immunized. Titers may be part of that health plan in rare cases. Talk with your veterinarian about your options. Overall, a defined vaccine schedule is preferred over titers to determine vaccine scheduling at this point.

A Little About Immunity Systems

Immune protection against pathogens is provided by two general systems in your cat. The first, humoral immunity, is the production of antibodies that bind to and neutralize pathogens. The measurement of titers evaluates this system.

The second component to the immune system is called cell-mediated immunity. This part of your cat’s immune defenses involves the activation of various cells that either engulf invading pathogens or that release chemicals that ultimately lead to the recruitment of other cells in neutralization of pathogens. Cell-mediated immunity is more effective against certain pathogens than the production of antibodies. It is possible, but not certain, that for some diseases, even if your cat has a low antibody titer, she is still protected from illness by her cell-mediated immune system.