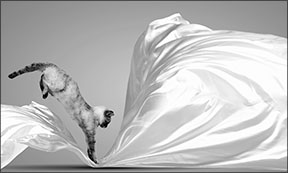 Owners, take note: At some point in time, your cat might tear a nail. It’s one of the top 10 pet accidents requiring veterinary care, according to a review of thousands of claims by Veterinary Pet Insurance. And it can happen in a flash.

“The claw gets caught in material like a rug or a crack between the boards of a deck, and the animal tries to extract it, or makes a sudden turn without recognizing that one of his claws is caught — resulting in a torn claw, or avulsion,” says dermatologist William H. Miller, VMD, Medical Director of the Cornell University Hospital for Animals.

Because they enjoy climbing and scratching, cats can easily snag their nails in curtains or upholstered furniture. Another common cause of injury is nail clipping — even a small movement of the paw during a session can cause a tear.

Those Long Claws. While any age or breed of cat can injure a claw, “Cats with overlong claws are more prone to an avulsion,” says Dr. Miller. Kittens are especially vulnerable as they engage in active play or acrobatic sessions. Nail injuries are also common in outdoor cats — they often snag their claws while scrambling up trees.

In addition, Dr. Miller says, “If the animal has a localized claw disease, such as ringworm, that claw is much more easily damaged. And although rare, some systemic diseases or congenital hereditary conditions like hypothyroidism, nutritional deficiency or primary seborrhea (causing scaly, itchy skin) can result in weakness of all the claws, making both skin lesions and claw damage more likely.”

Serious complications sometimes develop from nail injuries. “A torn claw is painful,” Dr. Miller says. “Often the claw isn’t ripped off entirely but remains attached to the non-avulsed portion near the base of the claw. Every time the avulsed portion is pulled, banged or bumped, more pain is added to the picture. Rarely, the trauma to the caught claw is so intense that the bone beneath the claw is fractured, which is excruciatingly painful.”
When the claw is torn, the claw bed is left without its protective covering,

Dr. Miller says. “If the injury is ignored, the exposed claw bed can become infected. The infection can get into the bone and become an entirely different and more serious issue.”

Home Remedies. Owners can sometimes remedy a torn nail at home. If some of it is still attached, it’s necessary to clip it off to prevent further discomfort. “If the animal isn’t in too much pain, the owner may be able to do this,” says Dr. Miller. “If the claw is torn off entirely, but again, the animal isn’t in too much pain, lightly bandaging that foot will protect the claw bed from additional damage.”

The wound should be monitored and the bandage changed frequently. If the wound begins to smell bad, indicating infection, a trip to the veterinarian is in order, Dr. Miller says. “Regardless of how simple the claw damage looks, if the animal is in pain, don’t try these remedies at home — you may get bitten. Leave the treatment to your cat’s veterinarian.”

If the foot is especially painful, the veterinarian may administer a local anesthesia or tranquilizer. He or she will then remove the damaged portion of the claw and may bandage the foot, prescribe antibiotics to ward off infection and prescribe pain medications or antiseptics as needed.

You can expect mild bleeding from the injured area during the 24 hours after treatment. “Pain and swelling should begin to diminish within two days, and within a few weeks, the nail should begin to re-grow,” Dr. Miller says. “Keep your cat indoors during treatment to prevent re-injury and keep the wound clean. With good treatment, the prognosis for a torn nail is excellent: The vast majority of cats with injured nails make complete recoveries.”

Although claw injuries can’t be entirely prevented, you can take steps to decrease the risk. Be aware of your cat’s surroundings to avoid potential claw-snagging situations, supervise physical activity and make sure to provide a tightly woven scratching post. ❖