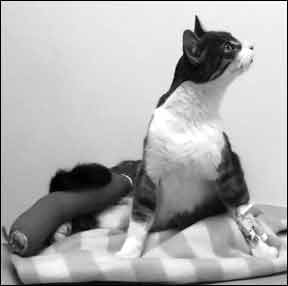 Despite their typically strong, agile, and resilient bodies, cats are subject to a wide variety of musculoskeletal disorders — diseases and injuries affecting the complex structure of bones, muscles, tendons, and ligaments that give shape to their bodies and enable them to move about. Fortunately, most of these disorders — such as congenital malformations, inflammatory diseases and tumorous growths — are relatively rare in cats.

Less rare by comparison are bone fractures that result from traumatic events, such as  when a cat is hit by a car, for example, or falls from a tree. A fracture can occur when any physical force applies sudden and excessive pressure on a bone until it snaps at its weakest point.

Although fractures occur less frequently in felines than they do in dogs, cats with broken bones are treated once or twice each month at the Cornell University Hospital for Animals (CUHA), according to Ursula Krotscheck, DVM, an assistant professor of clinical sciences at the University’s College of Veterinary Medicine.

All fractures are treated with great care, regardless of their severity, since any broken bone — if not treated immediately and appropriately — can conceivably result in a permanent malfunction or the loss of a limb.

Traumatic Injuries. Getting hit by a car or truck is by far the greatest single cause of feline bone fractures, says Dr. Krotscheck. Cats fortunate to have survived such a traumatic event will usually have one or more broken bones to show for the unpleasant experience, typically in the pelvis, hind legs, or tail. The second most frequently seen feline fractures are those sustained by cats who fall to earth from a significant height — from a lofty tree branch, say, or from the windowsill of a house or apartment building.

A cat can also suffer a fracture in a fight with another animal (a coyote or hostile dog, for example) or by getting tangled up in gardening or farming equipment or — if it is lucky enough to survive — by being shot at by a trigger-happy hunter.

The threat of bone fracture, however, is by no means confined to those animals that spend most of their lives outdoors. “A cat can break a bone indoors by leaping to the floor from a high shelf or the top of a refrigerator,” notes Dr. Krotscheck. “A bone can even snap if it gets caught between couch cushions or between a mattress and a bed frame. In fact, that’s quite common.”

Vulnerable Bones. Feline fractures occur most frequently in the long bones of the front or hind limbs,  the femur, tibia, humerus, radius, or ulna. Broken pelvises and jaws may occur, though less frequently. And spinal fractures can also happen, but they are extremely rare. Rib fractures are comparatively rare in cats — much rarer than in dogs, Dr. Krotscheck points out — because the feline rib cage is “very pliable.”
As is true of dogs and humans, a cat is prone to two broadly defined types of bone fracture — closed and open. Within each category, breaks of varying severity may occur.

Closed fractures are those in which a broken bone has not penetrated the skin and, therefore, has no communication with the outside environment. The least serious of these is a hairline fracture, in which there is a crack in the bone, but the bone doesn’t change shape or position.

Open fractures are those in which a broken bone has penetrated the skin surface, resulting in damage to surrounding muscle and other soft tissues. These are obviously far more dangerous than closed fractures because of their complexity and the risk of infection stemming from the exposure of bone and soft tissues to the environment. There are three categories — or “grades” — of open-fracture severity:

Grade One open fracture. It’s the most common and least severe. Essentially, a piece of bone breaks through the skin and immediately retreats back into the body, leaving a small wound in the skin surface.

Grade Two open fracture. There is significant trauma to the skin and underlying tissue, and a portion of the broken bone remains exposed to the environment.

Grade Three open fracture. The most serious, it involves severe trauma to the bone, skin, and underlying tissue and may include significant loss of bone tissue.

Fractures may also be characterized according to whether a bone has broken cleanly in one or more places (a simple fracture) or has shattered into many pieces (called a comminuted fracture).

Damage Control. Most broken bones can be successfully repaired by an expert veterinary surgeon; the choice of methods depends primarily on which bone is broken and which type of fracture has occurred. A hairline fracture, for instance, may simply require only the use of bandages or splints, since the bone has not been displaced. The majority of fractures, however, will require surgery entailing the repositioning of the bone parts and their stabilization with a variety of plates, rods, wires and other orthopedic devices.

A fracture is diagnosed by means of a thorough physical examination and X-rays of the injured area. Specific treatment will be based on the location of the break and the type of fracture revealed by the X-ray images. For example, says Dr. Krotscheck: “If we see a minimally displaced fracture or just a hairline fracture in the bone, we might use external coaptation — a simple splint or cast that stabilizes the limb until the bone heals.  But that’s not usually a good option if there’s a break with significant bone displacement. And external coaptation is generally not used for fractures of the humerus or femur.”

In the case of a broken femur, a surgeon would probably opt to use some type of internal fixation, such as plating. In this procedure, a stainless steel plate is screwed onto the injured bone, keeping it aligned so that it can heal straight. The length of time necessary for a fracture to heal when a plate is involved will depend largely on the cat’s age.

As in humans, young cats tend to heal more quickly than significantly older cats, Dr. Krotscheck points out, so healing can take anywhere from eight weeks to several months.