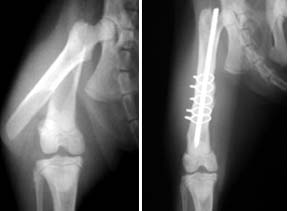 Despite their supple, resilient bodies, awe-inspiring agility and exquisite athleticism, cats – just like humans – are subject to a host of orthopedic problems. Of the various disorders of the feline skeletal system and associated soft tissues, bone fractures and their consequences are among the most common, says Robert Hart, DVM, an instructor of small animal surgery at Cornell Universitys College of Veterinary Medicine.

At the Cornell University Hospital for Animals (CUHA), Dr. Hart says, We typically see two or three cats each month with fractures of varying seriousness. All cases are treated with great care, regardless of their severity. As Dr. Hart points out, any broken bone – if not treated immediately or if improperly attended to – can conceivably result in a permanent malfunction or even the loss of a limb.

Frequent Causes
Auto accidents are known to be, by far, the greatest single cause of feline bone fractures. Animals lucky enough to survive being clipped or run over by a car will often suffer fractures to their rear ends – the pelvis, hind legs and tail – presumably because they have been struck while escaping an oncoming vehicle.

The second most common fractures are sustained by cats that fall to earth from a significant height – from a lofty tree branch, say, or from the window sill of a house or apartment building. But a cat can also break a limb, says Dr. Hart, by leaping from an eight-foot fence and landing the wrong way. On the other hand, a cat may survive a fall from an extreme height if its body is sufficiently relaxed as it lands. (Dr. Hart knows of one animal that plummeted 32 stories, fractured a few bones, but lived to meow about it.)

Fractures also occur with considerable frequency in roaming felines whose curiosity gets them tangled up in gardening or farming equipment – lawnmowers or threshers, for instance. And, sad to say, many cats sustain broken bones as a result of being kicked or slugged by their owners or shot by gun-wielding property owners who are trying to rid their land of strays, says Dr. Hart.

Cats seldom break bones while fighting with other cats, says Dr. Hart. Theyll suffer scratches, or deep skin wounds, or damage to their eyes, he says. But cats are pretty smart – theyre not going to fight hard enough to break each others bones. However, he has frequently seen cats at CUHA whose bones have been broken during run-ins with dogs or coyotes.

Sometimes, he points out, the cause of a fracture remains unknown: You open the door, the cat goes out, and it comes back a while later with a broken leg – and you have no idea how it happened.

Types of Fracture: Open and Closed
A cat, like a human, is prone to two broadly-defined types of bone fracture: open and closed. Within each category, breaks of varying severity may occur.

Open fractures: This term describes fractures in which a broken bone has penetrated the skin surface. As Dr. Hart explains, there are three grades of open-fracture severity.

In a grade one open fracture (the most common and least severe), a piece of bone that has broken through the skin immediately retreats back into the body, leaving a small wound in the skin surface. In a grade two open fracture, there is significant trauma to the skin and underlying tissue, and a portion of the broken bone remains exposed to the environment. A grade three open fracture-the most serious-involves severe trauma to the bone, skin, and underlying tissue and may include significant loss of bone tissue.

Closed fractures: This term is used to describe fractures in which a broken bone has not penetrated the skin and, therefore, has no communication with the outside environment. The least serious of these is a hairline fracture, in which there is a crack in the bone, but the bone hasnt changed shape or position.

Of these two categories, Dr. Hart points out, open fractures are by far the more dangerous because of their complexity and the risk of infection stemming from the exposure of bone and soft tissues to the environment.

Fractures may also be characterized according to whether a bone has broken cleanly in one or more places (a simple fracture) or has shattered into many pieces (a comminuted fracture). In addition, fractures can be described according to the area of a bone in which a break has occurred. Kittens, for example, tend to experience physeal fractures, which occur in a soft area (growth plate) near the end of a long bone – the epiphysis – in which immature bone tissue is developing.

Vulnerable Areas
Feline fractures occur most frequently, says Dr. Hart, in the long bones of the front or hind limbs – the femur, tibia, radius, or ulna. We also see a lot of fractures of the jaw and the hard palate, he adds, and fractured pelvises are also fairly common.

Most of these broken bones, he says, can be successfully repaired by an expert veterinary surgeon. The same holds true for spinal fractures, he points out, although these injuries present a special challenge. Cats are so small, says Dr. Hart, that if their spine breaks, they may die. Occasionally, the injury will not be fatal but the spinal cord will be so damaged that the animal will be permanently paralyzed. In many instances, however, the spine can be repaired, and the cat will regain its walking function.

A Waiting Period
Cat owners should consider any fracture as a medical emergency that requires immediate veterinary attention. Although a fracture – or at least the area of injury – is likely to be clearly apparent, an experienced  veterinarian may postpone repairing the injury pending a period of observation and a variety of laboratory tests. Dr. Hart describes the process as follows: We will put the cat in a restricted area, cage it in order to limit its mobility, and give it pain medication and provide any other necessary treatment. Lab tests and X-rays will be done immediately, and then well wait for as long as it takes – perhaps several days – to make sure that the animal didnt suffer life-threatening internal injuries in the accident that caused the bone fracture.

We also want the cat to get some rest. You dont want to operate right away on an animal thats just fallen out of a tree or been caught in a thresher. Youve got to give its body time to recover from the trauma.

The Repair Job
Measures employed to repair a broken bone depend primarily on which bone was broken and which type of fracture occurred. A hairline fracture, for instance, may require only the use of bandages or splints, since the bone has not been displaced.

The majority of fractures, however, will require surgery entailing the repositioning of the bone parts and their stabilization with a variety of plates, rods, wires, and other permanently installed orthopedic paraphernalia. Repairing a broken bone, he points out, can range from $500 or so to fix a simple fracture to several thousand dollars for a complicated repair involving multiple bones.

Our goal, says Dr. Hart, is to get the animal walking as soon as possible. Most cats are ready to test the fixed fracture within a few days or weeks after surgery. But you want to keep them as quiet as possible so that they dont overdo and wreck the repair job. Fortunately, the outcome is almost always uniformly successful, and the cats normal function soon returns.