While different cancers have varying warning signs, early symptoms can be general signs that something’s wrong. Some signs might indicate other illnesses as well, but in any illness, the earlier it is caught and treated, the better the prognosis and the less the cost of treatment.

Behavior Changes: If your cat is hiding more, not interacting with you the way she normally does and is not soaking up the sun in her favorite afternoon nap spots, something may be wrong. There is similar reason to be concerned if she isn’t as active as she once was or doesn’t seem to want to put in the effort to play, even with that addictive feather toy.

Bleeding or Discharge: The only normal discharges are urine, feces, and in some cases, a clear watery discharge in unspayed female cats that are in estrus. Anything else warrants a veterinary visit.

Bloating: If your cat is suddenly looking fat when she never did before, she could have a bloated abdomen due to fluid buildup related to a cancer.

Breathing Difficulties: A cat who is less active and struggling to breathe or breathing rapidly (greater than 40 breaths per minute) may have lung cancer/disease or a cardiac condition.

Difficulty Defecating or Urinating: A too-clean litterbox is always a serious concern. In cancer, it could be a sign of blockage of the urinary or gastrointestinal (GI) tracts by tumors.

Jaundice: A yellow tinge to your cat’s skin, inside her ears, on her gums, or on the “whites” of her eyes could indicate liver problems, including cancer.

Lack of Appetite: Cancerous growths may make it difficult for a cat to eat, interfere with the absorption of nutrients, or may secrete chemicals that decrease appetite.

Lameness: Cancers of the bones or joints can cause lameness.

Lumps and Bumps: We all pet our cats, but that’s not the same as doing a monthly check for new lumps. Bumps could be benign fatty tumors or could be more aggressive cancers, and they should be closely monitored.

Matted Hair: A lack of feline hygiene is a sign your cat isn’t feeling well. It could be arthritis or obesity making it difficult for her to self-groom, but she could also be weak or feeling poorly.

Mouth Abnormalities: Drooling, especially with blood, may be due to a mass in her mouth. Oral cancers are commonly associated with foul breath.

Non-Healing Sores or Scaly Skin: Sores that won’t heal are problematic, especially if you have a white cat with sores on her face or ears.

Vomiting and/or Diarrhea: These are commonly observed in a variety of diseases, including cancers.

Weight Loss: Unintended weight loss should set off alarms. Cancer cells can decrease nutrient absorption and increase the metabolic demands of a cat, causing weight loss despite a good appetite. Weigh your cat monthly. It’s difficult to judge weight change when you see your cat every day.

You are your cat’s first line of defense when it comes to health care. Make sure you know her normal physical appearance so that you can recognize any changes. Caught early on, many cancers can be managed to give your cat more quality time with you 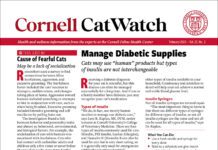