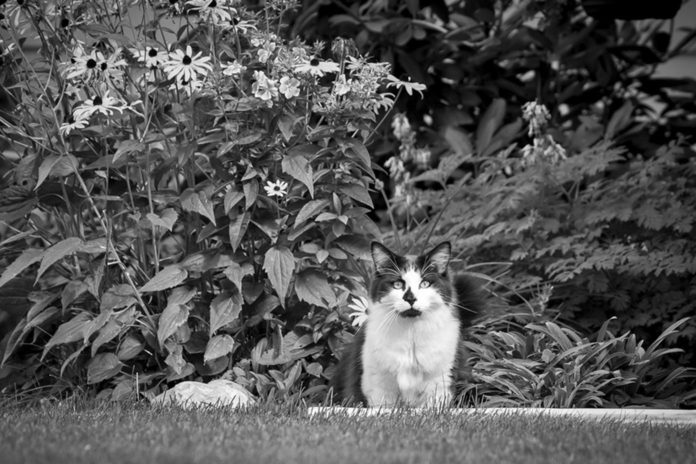 Unlike dogs who typically develop discrete hot spots in response to irritation, insects and allergies, hot spots in cats are less common for one surprising reason: “Although they can have an identifiable trigger event, they can pop up for no apparent reason,” says dermatologist William H. Miller, VMD, a medical director of the Cornell University Companion Animal Hospital.

“Instead of hot spots, cats can get hot zones. In dogs the hot spot is usually fairly small while they are much bigger in the cat, hence, a zone versus a spot. When clawed cats scratch an area, they usually do much more damage than a scratching dog would. When the sore is created by licking, the cat does a better job and licks a much wider area than a dog.”

It’s the Season. A hot zone is a localized area of acute moist dermatitis caused by self-trauma. The trigger event can indeed be allergies, Dr. Miller says, and as we approach the height of summer, managing an allergic cat can be especially daunting.

Certain foods and dust mites can cause year-round itchiness and general misery for affected cats. But allergies to pollen, moldand flea bites tend to be more seasonal. They become more prevalent in warm weather, waxing and waning in severity.

The encouraging news is that the incidence of flea-bite allergy, once the most typical allergic reaction seen in cats, has decreased considerably since the advent of effective, easy-to-use flea control products. “However, in areas where people do not use these preventives, flea bite hypersensitivity is still alive and well,” Dr. Miller says.

An allergy is an immunologic reaction that causes clinical signs — some more serious than others. Allergic cats typically react to normally innocuous substances, including food ingredients, insects and substances in the environment, including various chemicals.

“It can also extend to agents that are normally somewhat harmful such as insect bites,” Dr. Miller says. “But in these cases, the response to the insect bite is well out of proportion to what you’d expect from the number of bites the animal gets.” They can result in redness, rashes, bleeding and secondary skin infections.

Unfortunately, allergies remain with the cat for life. “Cat owners have to appreciate that long-term control is necessary and will probably have to be adjusted as time goes on,” Dr. Miller says.

Genetic Influence. Young cats are particularly susceptible to some types of allergies. “Skin allergies are a genetically influenced disorder, so the signs occur early in life — often between 1 and 3 years of age,” Dr. Miller says. “We often don’t see the cat until he is 5 or older. This apparent later onset may be because the early signs of itching, such as excessive fur licking, aren’t noticed or don’t appear serious enough to go to the veterinarian.”

Often the cat’s unwillingness to take oral medications presents additional challenges. “Depending upon the cat, his temperament and the severity of his allergies, long-term control can be costly and time-consuming,” Dr. Miller says.

One type of treatment called immunotherapy, generally must be continued for months or even years to achieve results. Once a list of offending allergens is identified via blood or intradermal skin testing, a specialized serum, containing small quantities of these allergens, can be formulated specifically for your cat. Through injection of small amounts of the allergy serum over time, many cats experience a decreased sensitivity and reduced response to allergens.

Your cat’s veterinarian may prescribe topical ointments and oral antibiotics for hot spots. In severe cases, the cat may have to wear a collar to prevent further irritating the wound and risking reinfection. Once the underlying cause has been identified and the wound treated, the hot spot can finally begin to cool down.

New research developments may help quell itching. “The mechanics of allergic reactions are being studied, so we know much more about the molecular mechanics of the disorder in dogs than we used to,” Dr. Miller says. “This knowledge is being used to develop new treatments. With time these treatment modalities will spill over into the cat so we’ll have better, safer, and, hopefully, easier to administer medications for the cat.”