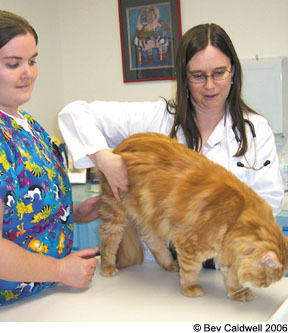 Constipation – the inability to evacuate the bowels easily – is a common feline malady that is attributable to a wide range of causes, including, for example, a faulty diet, traumatic injury, infection, an adverse reaction to medication, lack of access to drinking water, intestinal tumors, neurologic disease or an underlying metabolic abnormality.

Whatever the cause, the anatomic and functional signs are the same: The animals colon – the section of the intestine that functions as a reservoir for undigestable food, mucus, bacteria and dead cells prior to their passage from the body – becomes impacted with hard feces that refuse to budge. Or if the afflicted cat is able to partially move its bowels, the result is apt to take the form of small, hard, dry bits of stool.

The elimination process can be almost as painful for an animals owners to witness as it is for the cat to experience. The cat will hunch over its litter box, stare fixedly ahead, its abdomen pulsating, its legs and hindquarters quivering as it strains to pass the impacted stool. After repeated fruitless efforts, the cat is likely to give up and disappear from sight, presumably frustrated and uncomfortable, to take a peaceful breather before making another effort to defecate.

Potential Complications
According to Dr. Robert Washabau, VMD, a professor of medicine at the University of Pennsylvanias School of Veterinary Medicine, obstruction of the colon may occur in three progressively severe forms. The most common and least severe is occasional constipation, which is generally treatable with enemas, medication and dietary adjustment. If untreated, the condition can proceed to obstipation, a more stubborn fecal impaction that may require prolonged hospitalization and more elaborate therapy – for example, manual removal of hardened fecal matter from an anesthetized cats colon.

The most severe, end-stage form of constipation is megacolon, in which the colon becomes grossly dilated and unable to function properly. This condition could prove fatal without treatment, which may require surgical removal of part of the colon.

If your cat appears to be straining in order to defecate, says Dr. Washabau, or if shes yelping in pain while moving her bowels, the owner should consult a veterinarian as soon as possible. If the animal is completely unable to defecate, if it has lost its appetite, if it is vomiting, or if there is blood in its stool, you have an emergency situation – and veterinary help is needed without delay.

Overall, Dr. Washabau notes, about 75 percent of constipated cats do well after treatment. But, he adds, about 25 percent of the population are likely to have multiple recurrences due to colon damage. Over time, he says, this can become a real problem that calls for multiple veterinary visits.

Frequent Causes
According to Dr. Washabau, constipation, obstipation and megacolon may be seen in cats of any age, although most cases are observed in middle-aged animals (about six years of age). The problem occurs in both females and males, although about 70 percent of afflicted cats are males. Shorthaired cats are three times likelier than longhaired cats to experience constipation. And Siamese cats appear to be more vulnerable than other breeds.

Although the presence of trichobezoars – commonly known as hairballs – in the digestive tract is often cited as a precipitating factor in cases of constipation, Dr. Washabau contends that the scientific evidence for that is unconvincing. He is likewise skeptical about the extent to which dehydration is a key factor. A lack of water, says Dr. Washabau, can certainly worsen a case of constipation, but cannot in itself be considered a major cause.

In some cases, he says, constipation can stem from dietary inadequacy – especially a lack of  fiber – and from certain medicinal side effects. Inability to defecate easily and routinely may also be caused by neurologic conditions or from various disease processes, such as the development of an intestinal tumor.

Males, he says, also have difficulties with urinary tract obstruction. This can produce the same signs as colonic obstruction, and it may be impossible for the owner to know whether the cat is straining to defecate or straining to urinate. In fact, the two problems can exist together.

Unfortunately, if its a urinary obstruction, he could die from that –  so its most important, especially for a male cat, that the owner report unusual litter-box behavior to a veterinarian right away.

Of all known causes, says Dr. Washabau, the most common by far is damage to the pelvic bones resulting from trauma – when a cat is hit by an automobile, for example. This type of injury can narrow the bone structure in the pelvic area in such a way as to block the movement of fecal matter from the colon all the way out. About one-fourth of the constipation cases we see are due to pelvic fracture.

Addressing the Problem
Diagnosing constipation – a procedure that will typically include baseline blood tests, a blood chemistry analysis, and urinalysis – is a comparatively simple matter, according to Dr. Washabau. It begins with abdominal palpation. We feel around the abdomen, he says, and along the entire length of the colon to see if it is distended with fecal matter, and we observe whether theres any pain associated with the palpation. If the animal is constipated, you can tell right away. To follow up, we sometimes do X-rays or abdominal ultrasound. With an older cat, for example, we might be worried that there is a tumor causing the obstruction. This is uncommon in the colon, but it does occasionally occur – so X-rays and ultrasound would be needed.

Although dehydration is an infrequent cause of colonic obstruction, treatment will usually begin with measures to reduce its role as a contributing factor. First, well rehydrate the cat, says Dr. Washabau, and then well treat the animal with a warm-water enema, repeating the process as often as necessary to produce results. Sometimes, this can be done under mild sedation, but general anesthesia may be required. If warm water doesnt do the job, we may give enemas with lactulose. This is a synthetic sugar that makes the fecal matter more liquid and more readily defecated. We also may use motility agents or drugs that stimulate secretion in the colon.

These drugs may take two or three days to work, he says. In any case, the cat will not be released to its owners until the obstruction has cleared. Only when the animal defecates, says Dr. Washabau, is it ready to go home. The cost of diagnosis and treatment, he notes, is typically in the $200-to-$300 range; treatment for advanced and more complex cases will, of course, be more costly.

Reducing the Risk
Several measures, Dr. Washabau advises, can help cat owners prevent their animals from experiencing constipation and its conceivably lethal consequences. The following, he says, are most important:

Feed your cat a high-fiber diet. It doesnt really matter whether the food is dry or wet.

Make sure that the animal has ready access to a good supply of clean, fresh drinking water.

Keep the litter box well tended. If you allow feces to accumulate for days, the cat may avoid it. Shell defecate somewhere else or may decide just to hold it in.

If it is a multiple-cat household, the animal may refuse to use the litter box out of fear of a competitor. Its wise in such a case to use multiple litter boxes.

Above all, he urges, pay serious attention to your cats defecation habits and consult your veterinarian promptly if you notice any signs of the animals inability or unwillingness to move its bowels.