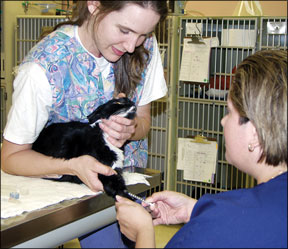 Lethargy, weakness and a reluctance to exercise are among the clinical signs of many feline health disorders. If your cat is showing these signs and you notice that she is also breathing rapidly and that her mucous membranes – especially her gums – are pale, its quite possible that she is suffering from anemia, a condition caused by an inadequate flow of oxygen throughout her system.

If the cause of the anemia can be detected at an early stage, the condition is often treatable. If it remains undiagnosed and is allowed to progress, however, it can lead to a cats gradual

Anemia results from a deficiency of red blood cells (erythrocytes). The rich, red color of these concave, disk-shaped cells, Dr. Goldstein explains, is imparted to them by hemoglobin, an iron-containing pigment that fills the cells. Both the red cells and the hemoglobin are produced in the bone marrow in response to stimulation by a hormone called erythropoietin, which is produced primarily in the kidneys. In a normal cat, the hormone stimulates the production of the erythrocytes in response to the need for oxygen. Accordingly, the oxygen inhaled by the animal binds with the hemoglobin and is transported to all the cells of the body.

Because oxygen and other substances, such as iron (which red cells transport as part of the hemoglobin molecule), are necessary to support the life of any animal, a severe loss or destruction of red cells or a dramatic reduction in the ability of the bone marrow to produce new erythrocytes presents a severe health threat.

The signs are similar in both regenerative and nonregenerative anemia. An affected cat will appear to be weak and lethargic; it will breathe rapidly in order to increase the amount of oxygen it takes in; and its gums, earflaps and nose will be paler than normal. A severely anemic cats mucous membranes may lose all color, and the animal may have an irregular heartbeat, diminished appetite and weight loss.

A veterinarian can usually arrive at a diagnosis of anemia based on a complete blood count and on the patients behavior and physical appearance. Treatment options will vary according to the cause of the disorder. In acute cases of anemia stemming from blood loss and red cell destruction, blood transfusions can save an affected cats life and allow it to survive until a definitive understanding of the cause is obtained.

“A blood transfusion is an immediate measure to get the animal through the crisis,” explains Dr. Goldstein. “If the blood loss is a result of trauma, a transfusion accompanied by fluid therapy may suffice. It will replenish the cats system until the regeneration of the natural blood supply starts to occur.

“But if red cell destruction is present,” he continues, “the next stage of treatment will depend on the cause. If the cause is an infectious disease, for example, we may treat the animal with antibiotics. If we determine that an exaggerated immune response is causing the problem, we may try to suppress the immune system.”

Unfortunately, inadequate red cell production caused by FeLV infection cannot be significantly reversed. Thus, this type of anemia carries a generally poor prognosis, although the life of an affected cat may be extended in some instances with periodic blood transfusions.

Although some veterinarians may recommend supplementing a cats diet with iron as a means of encouraging the development of red blood cells, Dr. Goldstein contends that dietary habits are, for the most part, inconsequential in lowering the risk of feline anemia. “Cats dont often get an iron deficiency from a lack of iron in their diets,” he says. “And for cats that have already been diagnosed with anemia, we would like to see their cells regenerate while theyre on a normal commercial diet.” He does, on the other hand, note one link between dietary intake and anemia; the consumption of garlic and onion powder in human food that is fed to cats has been associated with the development of one form of feline anemia.

To lower the risk, he advises owners as follows: “Keep your animals indoors to minimize their chances of being bitten by an FeLV-infected cat. Keep up with all of the vaccination protocols. Dont let your cat come in contact with toxins such as acetaminophen. Let your veterinarian know if your cats gums suddenly start looking pale. And be sure to take the animal in for a physical checkup and blood count semiannually or at least annually.”