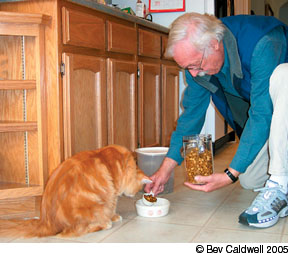 Obstructive lower urinary tract disease is a life-threatening condition that generally occurs in male cats, and is a true medical emergency. The urethra (the tube that carries urine from the bladder to the outside) can be blocked by mucus plugs, struvite (magnesium ammonium phosphate) crystals, spasms of urethral muscles or tumors.

Although these are included in the many potential causes of urethral obstructions, the underlying condition that brings them about often cant be discovered. Signs include frequent and lengthy trips to the litter box during which time the cat may strain to urinate, frequent licking of genitals, passing bloody urine and urinating outside the litter box altogether, says Dr. Goldstein, who is board certified by the American College of Veterinary Internal Medicine.

In addition to diet, obesity, a sedentary lifestyle and stress can play a part in lower urinary tract disease. In some cats, crystals in the urine are normal. But in others, the crystals lead to the formation of stones large enough to irritate the bladder or block the flow of urine. When the pH of urine reaches a certain level of alkalinity, struvite will crystalize and may become large enough to form stones that cause obstruction, explains Dr. Goldstein. The concentration of minerals in the cats urine is diet-dependent, and the concentration of urine is water-dependent.

The Role of Diet
What your cat eats and how often it eats may contribute to the problem. The ash and magnesium content of cat food was considered harmful in the past, but these levels have since been lowered in high-quality commercial foods. Urine that is more acidic is less likely to produce struvite crystals than is urine with a higher pH, so most commercially available cat foods are now designed to produce an acidic urine. As a result, struvite crystal formation has decreased in cats fed diets that make the urine acidic.

The pH of the urine is important, says Dr. Goldstein, but, thankfully, it is only one factor. Other factors are the concentration of certain minerals in the diet, how frequently a cat eats [cats fed several small meals or free-fed are less likely to get struvite crystals than cats fed one or two big meals a day], the concentration of the urine of cats eating the diet, and their lifestyle and stress level.

Stones, regardless of type, are less likely to form in dilute urine. One way to dilute the urine is by feeding your cat canned food. Cats that eat an exclusively dry diet are more likely to suffer from lower urinary tract disease than are cats that eat canned cat food or a combination of canned and dry. Its probably associated with water intake, says Dr. Goldstein.

Canned cat food contains up to 75 percent water, so a cat consumes more water with its meals. Just being on canned food might minimize the occurrence of the disease, says Dr. Goldstein. However, feeding an outdoor cat canned food can be problematic, because it shouldnt be left out very long if the cat doesnt eat all of it right away. An indoor cat can be on both canned and dry. If the cat shows signs of the disease, the more canned food the better.

Urine held longer in the bladder is more likely to form crystals, so drinking adequate amounts of water also helps a cat urinate more often and keep its bladder flushed out. The higher amount of salt available in some presciption diets promotes water intake. Getting your cat to drink more water may require creativity on your part.

Remember: If your cat shows any signs of straining to urinate or painful urination, take him to your veterinarian immediately.